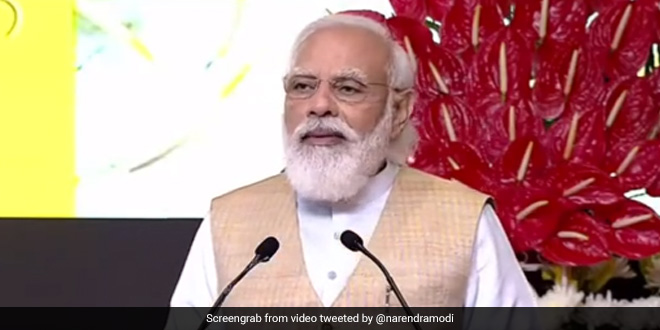 World Environment Day: PM Modi urged everyone to pick the most sustainable options in our daily life choices

New Delhi: On the World Environment Day, Prime Minister Narendra Modi launched a global initiative ‘Lifestyle for the Environment (LiFE) Movement’, and asserted that its vision is to live a lifestyle that is in tune with our planet and does not harm it. In a video address, PM Modi said that the people who adopt this lifestyle are ‘pro-planet people,’ and added that “Mission LiFE’ borrows from the past, operates in the present and focuses on the future. The PM used the slogan of ‘one earth, many efforts’, as he explained that India is ready to lend its support to actions to make the environment better and improve global wellness.

Talking about the state of the environment today, PM Modi said our planet’s challenges are well-known, and the need of the hour is human-centric, collective efforts and robust actions that further sustainable development. The Prime Minister added,

Reduce, reuse and recycle are the concepts woven into our life. The circular economy has been an integral part of our culture and lifestyle. Gods and goddesses in India have plants and animals associated with them, and nature is equated with divinity. Mahatma Gandhi talked about a zero-carbon lifestyle.

PM Modi urged everyone to pick the most sustainable options in our daily life choices.

Let us follow the principle of reuse, reduce and recycle. Our planet is one but our efforts have to be many. One earth, many efforts. India has been able to do many good things for the environment, with its forest cover increasing and so is the population of lions, tigers, leopards, elephants, and rhinos. Our commitment to reach 40 per cent of installed electric capacity from non-fossil fuel-based sources has been achieved, nine years ahead of schedule. We have achieved 10 per cent ethanol blending in petrol, five months ahead of the November 2022 target. This is a major accomplishment given that blending was hardly 1.5 per cent in 2013-14 and 5 per cent in 2019-20.

The Prime Minister’s Office (PMO) has also stated that the launch will initiate “LiFE global call for papers,” inviting ideas and suggestions from academics, universities and research institutions to influence and persuade individuals, communities and organisations across the world to adopt an environment-conscious lifestyle.

Earlier in the day, joining the Save Soil Movement by Sadhguru, PM Modi said India’s forest cover grew by over 20,000 sq km in last eight years – record growth in wildlife numbers too. He also said that India’s efforts to protect the environment are multi-dimensional even though its role in climate change negligible.

India is making this effort when India’s role in climate change is negligible. Large modern countries of the world are not only exploiting more and more resources of the earth, but maximum carbon emission goes to their account, PM Modi said.

He added that internationally, India has led the creation of CDRI and the International Solar Alliance. Last year, India has also resolved that it will achieve the target of net-zero by 2070.