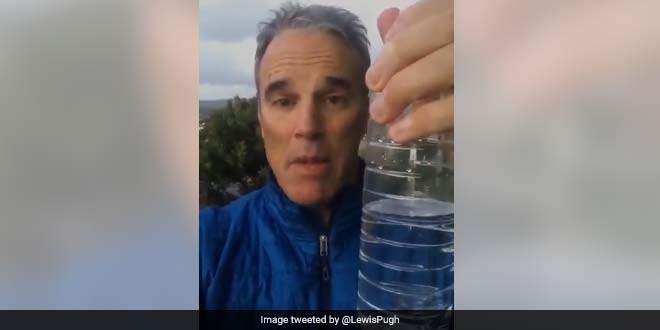 New Delhi: #BeatPlasticPollution challenge that has been initiated by UN Environment ahead of 45th World Environment Day celebrations is taking the internet by storm. People from all walks of life are joining the campaign and are helping to reduce the plastic load, latest being Lewis Pugh, UN Environment Patron of the Oceans who has taken the pledge to ditch the use of plastic bottles from his life.

Also Read: Plastic Straws Are One Of The Most Useless Inventions, Ditch Them, Says UN Environment Head Erik Solheim As He Takes The #BeatPlasticPollution Challenge

Through a video message, Lewis said,

Telling how plastic is harming the planet, he further said,

When the plastic breaks down into little pieces, birds eat them, fish eat them and when we eat fish, we are also getting plastic inside ourselves. This single-use plastic is having a devastating impact on our planet and oceans. So, what you can we do – instead of using a plastic bottle, just use a reusable one, which can be used 100 times. So, this world environment day, I urge everyone to beat plastic pollution by ditching the use of one single-use plastic from their life.

Lewis Pugh further nominated Environmentalist Afroz Shah with whom he cleaned-up Versova Beach back in 2016 and helped in the removal of removed 1.7 million kilograms of trash from the beach, Catherine McKenna, Minister of Environment & Climate Change Canada and Michael Gove, Secretary of State for Environment, Food and Rural Affairs of the United Kingdom.

In India, the #BeatPlasticPollution challenge has found its takers in celebrities like Alia Bhatt, Dia Mirza to name a few.