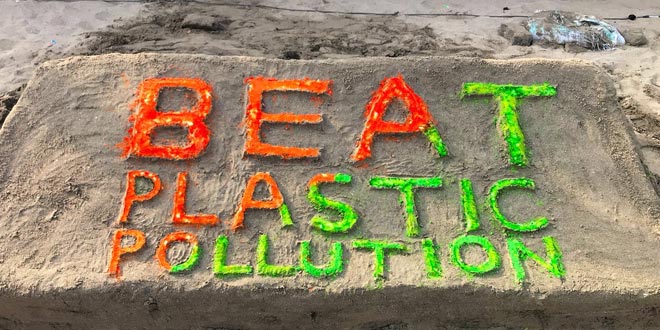 New Delhi: On May 27, Sunday, Environmentalist Afroz Shah along with his beach warriors armed with green T-shirts that were made from 100% recycled PET plastic bottle waste started cleaning Mumbai’s Versova beach to mark the beginning of 45th World Environment Day celebrations for which India is the global host and lend their support in beating plastic pollution. The event also witnessed a unique method of promotion where hand-drawn banners were used instead of vinyls and flex prints, which will later be turned into carry-all bags.

World Environment Celebrations: Who Said What

More than 6,000 people – from political dignitaries, actors to general public participated in the mass clean-up and helped removed 200,000 kgs of trash from Versova. Talking to UN Environment, UN Champion of the Earth Afroz Shah said, “Whenever I talk to young people about the need to clean up our environment, I tend to begin with an apology, because it is their future we are destroying.”

Sharing glimpses of the event on his social media, Afroz said,

India leads from the front. pic.twitter.com/167CC472dr

Incredible scenes at Versova beach in Mumbai. That’s the power of people for the environment. 136 weeks and going strong. What people are doing here is extremely good. Mahatma Gandhi once said – cleanliness is godliness, I appeal everyone to come together and help stop ocean pollution.

Yuva Sena Chief Aaditya Thackeray who was also present for Week 136 clean-up said that this global movement can help us tackle plastic pollution that has been created from our own habits.

My friend Afroz Shah has shown us what one person can do to protect our environment. It’s time for each of us to take it on ourselves to protect our planet. We can see the change taking place with the ban on single-use disposable plastic as a movement more than a ban.

My friend @AfrozShah1 has shown us what one person can do to protect our environment. It’s time for each of us to take it on ourselves to protect our planet. We can see the change taking place with the ban on single use disposable plastic as a movement more than a ban

Speaking on the lines of plastic ban, he further added,

It is Dia and Juhi, who pushed me for the ban on single-use plastics. Whenever it used to rain in Mumbai, we always used to blame the municipal corporation for not doing their work properly. But, it is not just them, we are responsible too. In the next two years, problems like drains getting chocked due to plastic pollution will be solved, thanks to the plastic ban in the state.

Actor and UN Environment Goodwill Ambassador Dia Mirza who has been supporting Versova beach clean-ups regularly, on the other hand, said, “I have long admired Afroz and his foot soldiers for being incredible champions for us. I want to throw a challenge to everyone out there – just find whatever way you can to communicate the need to say no to plastics. While we clean our oceans, we also need to reduce the plastic usage. I appeal everyone, ditch the use of plastic cutlery, straws, bottles – just remember a simple saying – if you can’t refuse plastic, reuse it!”

Also Read: Actor Dia Mirza Appeals Women To Give Up The Use Of Plastic Sanitary Napkins And Instead Opt For Eco-Friendly Alternatives

“We come from different fields, backgrounds and mindsets but what binds us all is that we unanimously say NO to single-use plastic!”

Along with the clean-up, there was the launch of 10 new cycles which are being called as plastic banks – they will be kept at 8 to 10 locations in Mumbai for the purpose of collecting waste in a segregated form.

Till date, from Versova, approximately 15 million kilograms of plastic and waste has already been removed.