New Delhi: In Palghar district of Maharashtra, 29-year-old Hemant’s son has been detected with Diarrhoea. His son is mere 5-months-old. His condition is severe and the doctors predict that the child must have caught rotavirus infection as the family does not have a toilet at home and this infection is usually spread through the contact with the stool from an infected person. Hemant’s story is not out of the ordinary. According to Health Ministry, in India, there are about 1.2 lakh children, like Hemant’s, under the age of five who succumb to diarrhoea every year. This translates to 328 diarrhoea deaths every day and 13 every hour.

On this World Health Day, we take a look at how not having access to proper sanitation can increase ones risk of having different types of life-threatening diseases.

Also Read: World Health Day 2018: How Not Having Access To Safe Sanitation And Hygiene Is Killing Millions In India

Apart from Diarrhoea, in India, 38 percent of children are stunted (do not meet potential growth, development, physically and mentally), 14 percent neo-natal deaths occur due to sepsis, which is a life-threatening complication of an infection. And these problems occur as a result of inadequate access to safe drinking water, sanitation and hygiene facilities. 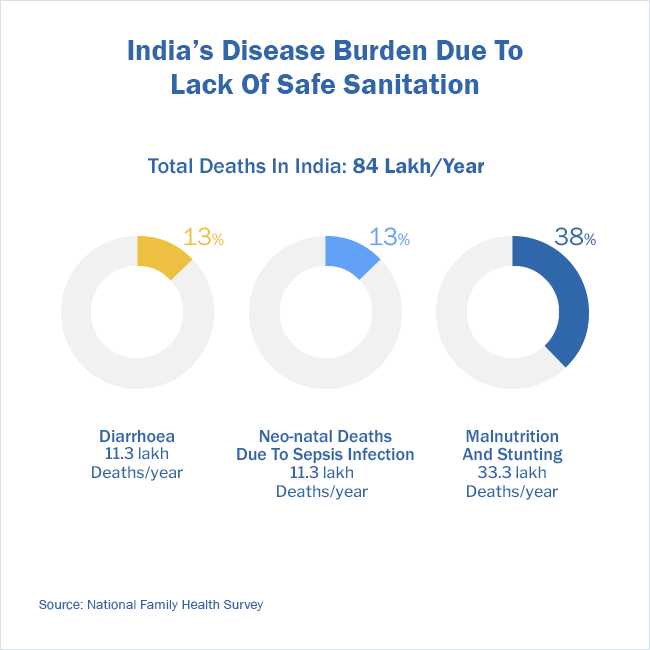 Experts say if a child is not given access to adequate sanitation in early years, then he/she faces health problems for the entire lifespan despite having proper food.

Yes, not having access to safe  sanitation has health implications. When people defecate in the open, the land, water sources get contaminated with faecal matter. These faecal pathogens can enter the water we drink and contaminate the food we eat- affecting our health.

Talking about India’s overall health, according to a first join state-wise study done in India by the Indian Council of Medical Research (ICMR), Public Health Foundation of India (PHFI), and Institute for Health Metrics and Evaluation (IHME) in collaboration with the Ministry of Health and Family Welfare, in 2016, the per person disease burden due to unsafe water and sanitation was 40 times higher in India than in China in 2016.

Here is a look at some of the diseases that India can get rid of completely with improved sanitation:

A person catches diarrhea due to various types of viruses, bacteria, and protozoans. The disease causes a person to lose both water and electrolytes, which leads to dehydration and, in some cases, to death.

Globally, diarrhoea is the fourth biggest killer of children under the age of five, while in India it is the third biggest killer after birth complications and pneumonia.

Cholera is a serious infection caused by the bacterium Vibrio cholera, which leads to painless watery diarrhoea, nausea and vomiting. This disease if untreated can lead to death. The main cause of the disease is eating food or drink contaminated with faeces of infected persons.

According to World Health Organisation, the occurrence of this disease in India is very rare – as less than 100 thousand cases per year are recorded. But, even this percentage can come down to zero if each and every household has access to a safe toilet.

According to a study done by the health ministry of Karnataka, 34 cases of Cholera from Bidar district were reported in 2016 and the cause was open defecation. AT that time, only 15 of the 270 houses in Mustapur Wadi village from where the instances were reported had toilets and the village three wells and three borewells from where the water was taken were situated near the grounds where people used to defecate in the open on a regular basis.

Japanese Encephalitis is a leading disease in India caused by mosquito-borne flavivirus and bad sanitation practices. A report by Indian Council of Medical Research states that Uttar Pradesh and Bihar are two states, which have seen the most number of encephalitis cases in recent years.
Data from the Ministry of health and family welfare department has revealed that from 2008 to 2017, the maximum number of JE cases were reported in 2017 in Uttar Pradesh. There were 677 cases with 81 deaths.

A district-level study done at UP’s Gorakhpur, which is known for this deadly disease states that the main cause why year after year, Gorakhpur sees little children dying from this disease is due to lack of infrastructure and lack of access to clean water and toilets.

Even Uttar Pradesh Chief Minister Yogi Adityanath has attributed the spread of Japanese Encephalitis (JE) in the state’s eastern region to the lack of sanitation and cleanliness of water bodies.

Recently, the CM has also instructed all the district officials of UP to speed up toilet construction work JE affected areas, especially so that the death rate due to this disease can come down.

Apart from Uttar Pradesh, studies have also shown that Assam is also the worst affected state in India with JE virus.

Since the inception of Swachh Bharat Abhiyan in October 2, 2014, more than 6 crore toilets in India have been constructed. The sanitation coverage has moved up from mere 38% in 2014 to 80% now and the target of the government is to build approximately 12 crore toilets by October 2, 2019, and provide access to safe sanitation practices to each and every individual.

Arundati Muralidharan, concludes by adding how the movement has helped India reduce the disease burden in the past few years,

It is important to understand that diseases like Diarrhoea, and conditions like stunting ( resulting from chronic undernutrition) are linked to open defecation – however, other critical hygiene behaviours such as hand washing  after defecation are also important in preventing faecal germs from entering our bodies. If we look at past few years, since the inception of Government’s biggest cleanliness drive – the Swachh Bharat Abhiyan, we can see a tremendous progress. A lot has been done to improve the sanitation coverage in the country which in turn will have important health benefits. To enhance these health benefits we need to broaden our efforts to also include a focus on safe drinking water, and hand hygiene.

According to the Housing and Urban Affairs Ministry, indicators under Swachh Survekshan 2021 focus on parameters pertaining to wastewater treatment and reuse along with faecal sludge management

Women’s Day 2021: COVID-19 Pandemic Impact On Women And Their Struggle To Feed Their Families