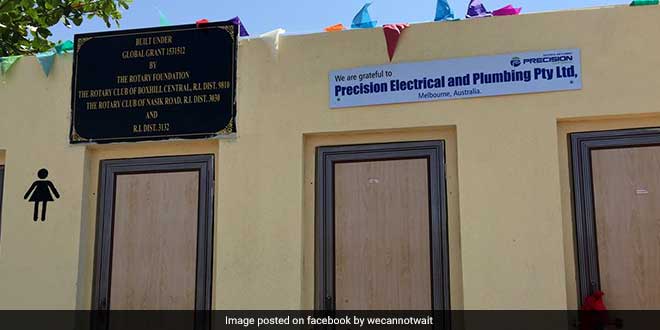 New Delhi: In Jharkhand’s Loharadaga district, Sakuntala Devi’s familiarity with premature death of children goes back a long way. An Anganwadi worker for over 12 years, Sakuntala Devi has travelled across the district extensively to ensure care for young children and HAS often seen many succumb to diarrhoea and severe malnutrition. A backward district with very few amenities, Lohardaga’s villages had adjusted to A life dealing with the loss of their young and loved ones. In 2014, when the Swachh Bharat Abhiyan was announced, the district administration began the task of building toilets and Sakuntala Devi observed that though not overwhelming, there was a definite decrease in the number of child deaths and increase in health indicators. Her assumptions were confirmed when the Asian Development Research Institute conducted a survey on the impact of Swachh Bharat Abhiyan in some of Jharkhand’s districts in 2016 and found that cases of diarrhoea and malnutrition came down by 23% and 8% respectively.

While the Swachh Bharat Abhiyan was launched to eradicate the practice of open defecation, it also looked at improving health indicators across India by encouraging the practice of safe sanitation. Disease burden in India is a significant problem in terms of the country’s development indicators. The Health of the Nation Survey conducted in 2016 by the Ministry of Health and Family Welfare reported that the overall health scenario in India saw significant improvement in the 26 years between 1990 and 2016. Diarrhoea, a major disease spurned by unsafe sanitation practices was a major cause of death in India, contributing to an average of 15.5% of total deaths (1316 million) in India from 1990 to 2016. The states of Bihar, Chhattisgarh, Jharkhand, Madhya Pradesh, Odisha, Rajasthan and Uttar Pradesh showed childhood mortality rates due to diarrhoea at severely high percentages between 50-60%, compared to the national average of 13%.

The absence of safe sanitation practices in some of India’s most backward states had pushed up diarrhoeal deaths to severely high numbers. Open defecation, especially in rural areas was the norm in most districts in these states and the practice resulted in diarrhoea becomING a common phenomenon across households. With the building of toilets becoming widespread, instances of diarrhoeal deaths are decreasing, albeit gradually, said Punam Tirkey, Research Coordinator, Asian Development Research Institute.

The relationship between cleanliness and better health has been propagated since the inception of the Swachh Bharat Abhiyan. The transition of a cleaner India to a healthier India has been advocated by numerous public figures, from the Prime Minister to film actors and sportsmen. In 1990, deaths due to unsafe water and sanitation consisted of 13 per cent of total deaths across the country. BY 2016, the percentage had come down to 5 per cent. Though the decrease is significant, it is still quite high. The states of Chhattisgarh, Jharkhand, Madhya Pradesh and Rajasthan have sanitation coverage of 80 per cent and above, signaling stark changes in their sanitation figures. 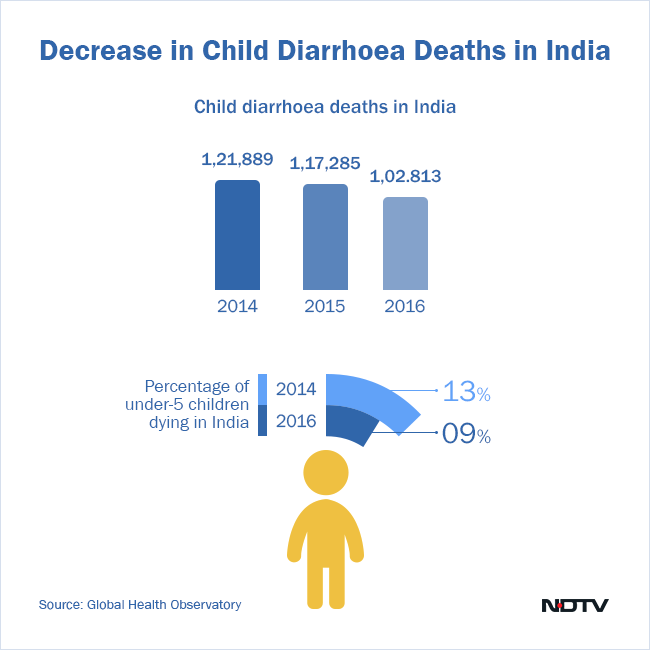 Since the Swachh Bharat Abhiyan was launched, there has been a marginal decrease in child diarrhoeal deaths in India

Between 2014 and 2016, several states reported a decrease in diarrhoeal states across some of the worst affected states. In the two years after the Abhiyan was launched, states like Chhattisgarh, Madhya Pradesh and Jharkhand had just began bettering their sanitation scenario. In two years since 2014, some of the worst performing districts from these states saw improvement in child health, said Arun Singhal, Additional Secretary, Ministry of Health and Family Welfare.

A 2016 Centre for Policy Research based study across some of India’s districts and towns analysed their performance in health indicators, post toilet construction. In Pune’s Warje suburb, within a year of installation of community toilets, instances of open defecation reduced by over 80 per cent. Cases of diarrhoea reduced from over 450 to less than 100 and no diarrhoeal deaths were recorded. In Madhya Pradesh’s Sehore, no diarrhoeal deaths were reported between 2014 and 2016 in the 12 ODF villages in the district. More than 300 cases of diarrhoea and 22 deaths were reported within a similar timeline across 17 non-ODF villages in the district. 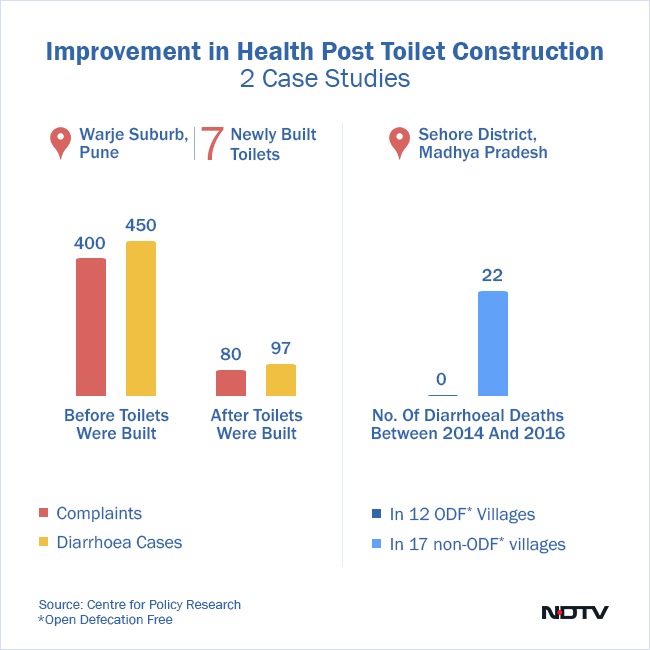 When toilets were being built in Sehore during the initial year of Swachh Bharat Abhiyan, little did we know that they will help curb diarrhoea, malnutrition and child deaths. Along with being open defecation free today, diarrhoea has also been effectively curbed in the district. We carry out regular inspections and in case diarrhoea incidents are reported, we check the sanitation status of the household to see if safe sanitation is being practised across the house, said Tarun Kumar Pithode, District Magistrate, Sehore.

From Swachh Bharat To Swasth Bharat

India’s sanitation coverage has reached 80.65 per cent from 38 per cent in 2014. Improvement in sanitation has decreased per person disease burden in India, but the stakes remain high. The child and malnutrition diseases burden per person was 12 times higher than China. As per the 2017 Health Survey, even India’s best performing state of Kerala had a per person disease burden which is 2.7 times higher than China, indicating major room for improvement.

Diarrhoea and malnutrition, two major diseases caused by unsafe sanitation practices are still prevalent in India. The nature of these diseases and how they are caused must be publicised when Swachh Bharat is talked about. When verifying ODF villages, the government should also take note of whether instances of diarrhoea and malnutrition have come down in an ODF town or village. That way, we will have a clearer picture of the campaign’s impact on overall health in India, said Shubhagoto Dasgupta, Senior Fellow, Centre for Policy Research.

For Sakuntala Devi, the Swachh Bharat Abhiyan has brought not only dignity to thousands of women from her district but has also given them and their children lives devoid of the pangs of diarrhoea and malnutrition. But a clearer picture on the true impact of Swachh Bharat Abhiyan on reducing diarrhoea and malnutrition will emerge if a comprehensive nationwide survey of its impact on health is conducted.

Also Read: World Health Day 2018: The Hidden Dangers In The Life Of People Without Toilets

World Health Day 2018: A Number Of Indian Children Continue To Fall Prey To Malnutrition And Stunting, And Safe Sanitation Practices Could Rescue Them From Their Plight

World Health Day 2018: The Hidden Dangers In The Life Of People Without Toilets