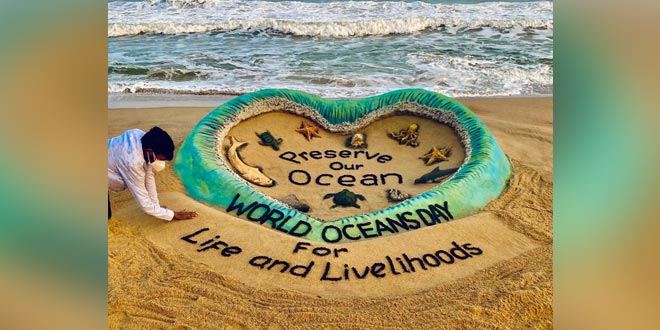 New Delhi: Oceans, that cover 70 per cent of the planet are the life source supporting humanity’s sustenance and that of every other organism on earth, according to United Nations. To remind everyone of the major role the oceans have in everyday life, World Oceans Day is observed annually on June 8. World Oceans Day 2021 is based on the theme “The Ocean: Life and Livelihoods”. To mark the special occasion and extend his support to protecting oceans, Padma Shree awardee and sand artist Sudarsan Pattnaik created a sculpture featuring marine life at Puri beach in Odisha.

We have used the heart, a symbol of love, to depict the ocean. The blue colour heart that resembles the ocean has fishes and turtles residing in it and asking to ‘preserve our ocean’. The sea life is appealing for love and care. We all are aware of plastic pollution and how often plastic waste ends up in water bodies polluting the environment and threatening marine life. The sand art is a call to protect the oceans and lives.

Take A Look At The Sand Art

On the occasion of #WorldOceansDay, my SandArt at Puri beach in Odisha with message “Preserve our oceans “ pic.twitter.com/7dAdVjO5Lm

Mr Pattnaik informed that it took him five hours and six tonnes of sand to put the piece together. The 15 feet wide sand art carries the theme of World Oceans Day 2021 that is ‘The Ocean: Life and Livelihoods’.

Our words need to translate into actions and we all need to take substantial actions towards protecting oceans, said Mr Pattnaik.

The world renowned sand artist has on numerous occasions dedicated his gigantic sand sculptures to raise awareness among people about environmental issues. Last year on World Oceans Day, Mr Pattnaik shared one of his works that called to protect and preserve the oceans from the wrath of plastic pollution.

#WorldOceansDay2020 ! let’s join our hands & make coordinated efforts to protect & preserve our #oceans and keep them clean and #BeatPlasticPolution Plastic pollution is causing tremendous harm to our marine life . I am sharing one of my SandArt. pic.twitter.com/plb2I6KllV

Also Read: World Oceans Day Special: A Photo Feature On The Impact Of Plastic Pollution On Life On The Planet

The Ocean: Life And Livelihoods

As per the UN, the ocean produces at least 50 per cent of the planet’s oxygen, it is home to most of the earth’s biodiversity, and is the main source of protein for more than a billion people around the world. The ocean is key to our economy with an estimated 40 million people being employed by ocean-based industries by 2030. However, our oceans need our support.

With 90 per cent of big fish populations depleted, and 50 per cent of coral reefs destroyed, we are taking more from the ocean than can be replenished. To protect and preserve the ocean and all it sustains, we must create a new balance, rooted in true understanding of the ocean and how humanity relates to it. We must build a connection to the ocean that is inclusive, innovative, and informed by lessons from the past, states UN.

World Oceans Day 2021 is focused at mobilising actions for sustainable management of oceans. The day also marks the launch of a decade of challenges to get the Sustainable Development Goal 14, “Conserve and sustainably use the oceans, seas and marine resources”, by 2030.