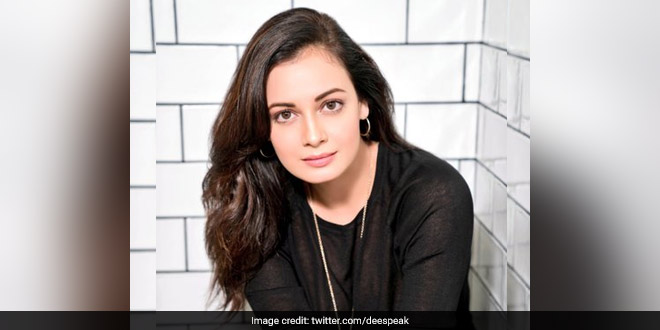 New Delhi: Actor and United Nations Environment Goodwill Ambassador for India, Dia Mirza, shared greeting of World Oceans Day and urged people to stop polluting oceans, the lifeblood of planet Earth and humankind. The environment conscious actor took it to twitter and shared the insights of how important the role of oceans is and why we should protect it from plastic pollution. She said, “Oceans, the lifeblood of planet Earth and humankind. They flow over nearly three-quarters of our planet, hold 97% of the planet’s water, produce more than half of the oxygen in the atmosphere, and absorb the most carbon from it. On #WorldOceansDay pledge to #BeatPlasticPollution”

Oceans, the lifeblood of planet Earth and humankind. They flow over nearly three-quarters of our planet, hold 97% of the planet’s water, produce more than half of the oxygen in the atmosphere, and absorb the most carbon from it. On #WorldOceansDay pledge to #BeatPlasticPollution pic.twitter.com/47RV41EvnU

Also Read: World Oceans Day: Save Our Oceans From Plastics Before It Is Too Late

From breaking her relationship with items made of plastic like sanitary napkins, toothbrush and many more to convincing her friends in the film fraternity to give up the use of plastic bottles, from picking up plastic waste from Mumbai’s beaches to urging people to refuse plastic products, Dia Mirza has always been vocal about plastic pollution.

The theme for World Oceans Day 2018 is ‘prevent plastic pollution and encourage solutions for a healthy ocean’. Plastic, a widely used item is becoming a threat to human life. According to United Nations, 80% of all pollution in the ocean comes from people on land. 8 million tonnes of plastic per year ends up in the ocean, wreaking havoc on wildlife, fisheries and tourism. Plastic pollution costs the lives of 1 million seabirds and 100,000 marine mammals per year. The theme is a wake-up call for all of us to stop the usage of plastic and save our oceans which play a pivotal role in our everyday life.

Keeping in mind the plastic menace, India hosted 45th World Environment Day on June 5 with the theme of #BeatPlasticPollution.