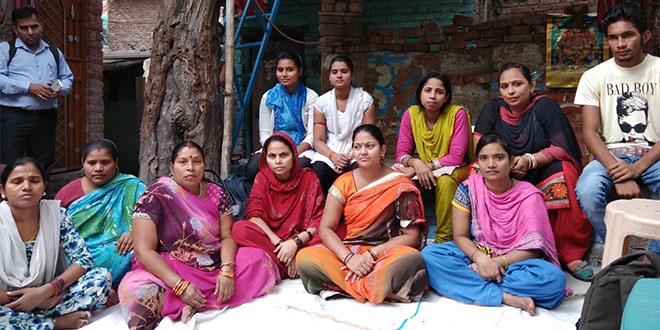 New Delhi: For 35-year-old Bhagwati, life in her tiny home in Okhla’s New Sanjay Camp had always been about living in unhygienic conditions. Lack of healthy and safe sanitation facilities, proper water supply had plagued not just Bhagwati, but several others like her in this Jhuggi Jhopdi cluster (JJC). JJCs are home to about 10 per cent of Delhi’s families and are located on land owned by public agencies such as the Delhi Development Authority (DDA), the Railways or the Public Works Department (PWD). Cramped homes, open drains and fear of evictions dominate JJCs and the New Sanjay Camp was not any different even a year back.

The impossible living conditions in the slums of Delhi had prompted the Delhi government to start the ‘Adarsh Basti’ initiative in June 2016, under the Delhi Urban Shelter Improvement Board (DUSIB). Under the initiative, basic amenities like public toilets and water supply were prioritised and 60 slums were shortlisted to implement the initiative. The JJC at Sanjay Camp was one such slum identified under the initiative, but people who have been deprived of amenities nearly all their lives needed necessary guidance to bring in the required behavioural change in their sanitation and cleanliness habits. This is where the Centre for Advocacy and Research (CFAR) stepped in, providing a guiding hand to form Community Management Committees (CMC) in some of these slums which empower the residents and entrenches in them a sense of responsibility to maintain a healthy sanitation environment.

A Community Comes Together To Improve Daily Livelihood

Home to 800 families, Okhla’s New Sanjay Camp was plagued by poor sanitation a year back. A dilapidated 42-seater community toilet’s skeletal remains signified the sanitation scenario in the camp as women had to go out in the open or take their children to the open sewers in the camp if they had to relieve themselves. Water was a scarcity, as families had to depend upon a faulty tubewell or spend much of their meagre incomes in buying water for daily usage. Approaching the authorities, namely the Municipal Corporation of Delhi (MCD) or the DUSIB yielded no results.

It was at this juncture; CFAR and its members entered the settlement and began its interactions with residents from the settlement. The entry, as expected, was not smooth as many residents questioned the need of such interaction and their motifs. But over the course of a few months of confidence building and networking, CFAR was successful in building a Community Management Committee within the camp, the members of which today keep regular tabs on sanitation, health and waste issues of the camp. 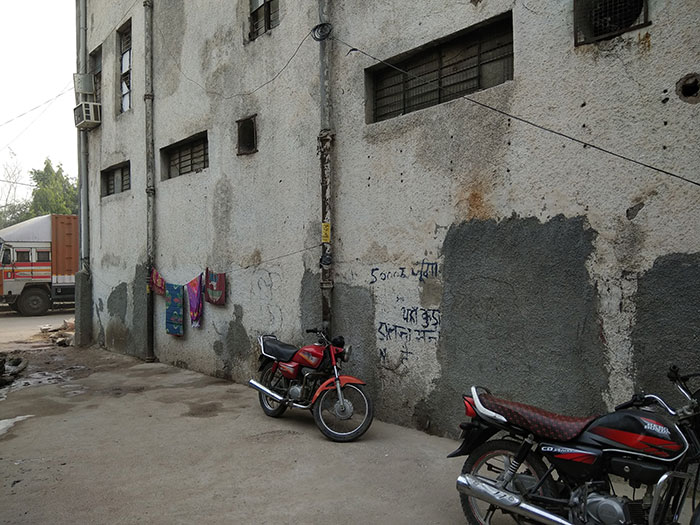 An area where waste was dumped regularly earlier, has been cleaned due to the CMC members’ efforts

Even a year back, the settlement was a mess. There was no functional toilet and we had to dispose waste in drains or in an open area adjacent to the settlement. Flies and illnesses were common, and we had become habituated to this life. When CFAR came to us, we thought what was their agenda to be invested in our well-being? But we gradually realised that our empowerment as a community would only lead us towards better lives, said Bhagwati, one of the members of the CMC.

The CMC, along with CFAR members met officials from DUSIB and MCD and put forward their grievances. The effort yielded results as the settlement residents today have access to a renovated 42-seater community toilet, and a new 42-seater toilet coming up soon. Two dustbins have also been installed outside the settlement for the residents to use. Water, earlier scarce and irregular comes on time. But it is not JUST these changes which CMC sees as its biggest achievements. For the group, the biggest achievement has been bringing together its members, the youth and peer educators. The efforts of the CMC has led to pregnant women taking up minor but important practices like hand-washing, as well as allow the community to coordinate water supply in the settlement, so as to avoid squabbles. 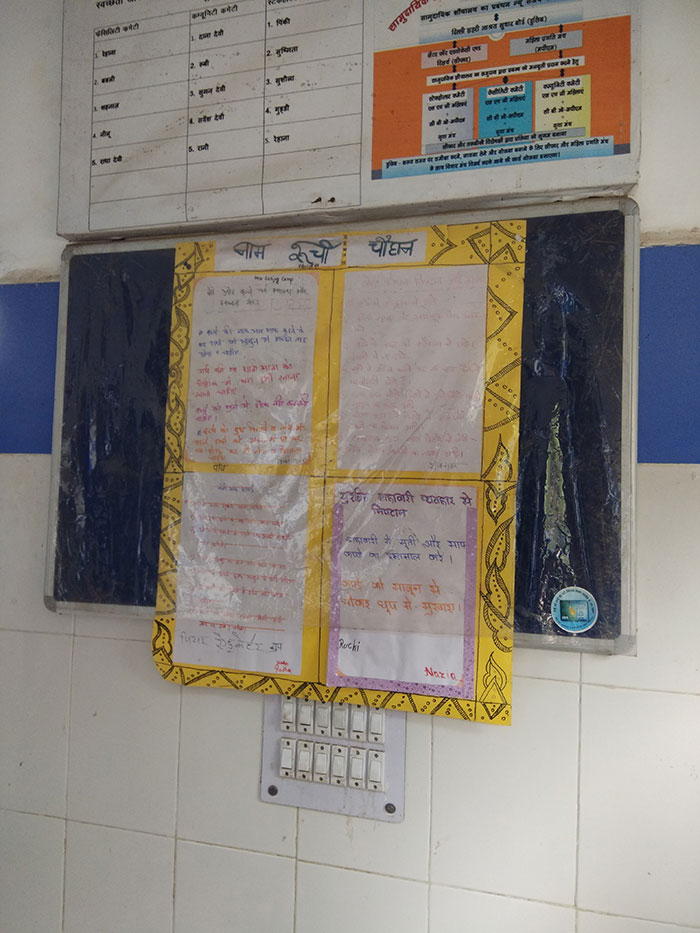 We have involved a number of members from the settlement to ensure that the conditions keep getting better. We check regularly to see that every household disposes waste into the dustbin only. Our grassroot communicators spread consciousness on sanitation and water management through wall newspapers in the toilets, and by performing Nukkad Nataks, said a CMC member.

Relieving Oneself At Night Still A Problem

CFAR’s model of forming Community Management Committees has seen varying levels of success in other similar camps such as Indira Gandhi Camp in Ashram and Janta Jeevan Camp in Okhla. For residents of the Indira Gandhi camp, toilets were an amenity they had thought they would never get access to. CFAR’s aiding in the formation of a CMC resulted in public hearings with DUSIB, DJB and MCD officials on December 2016, culminating in the building of 80-seater community toilet right outside the settlement premises. 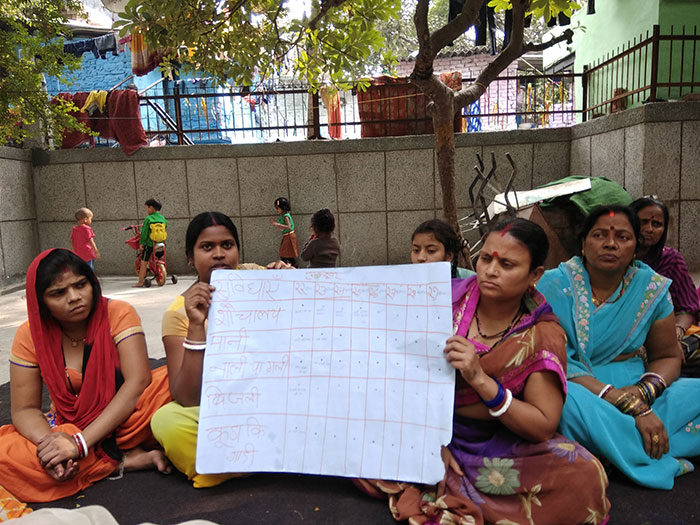 While the residents of the settlement are quite content with the 80-seater toilet complex that they can use daily, the absence of sanitation facilities at night is a common problem across all the camps. DUSIB constructed toilets are open till 10 or 11 at night, leaving the users without access to toilets till 4 or 5 AM in the morning. Emergency toilets, two in every sanitation complex is also often kept under locks due to security reasons as caretakers are afraid of late night vandalism and prefer to keep the complexes locked.

Since accessing toilets at night is not an option, camp residents are forced to relieve themselves in the open, despite them being conscious of the ill effects. For residents of the Janta Jeevan Camp in Okhla a desolate area nearly a kilometre away from their settlement is their only option to relieve themselves at night, compromising their security. The danger of open defecation still looms in these camps as no plausible solution has been provided to the problem of how the toilets can be made accessible at night.

At the moment we can only keep the emergency toilets in the complex open at night, but the overall complex will remain shut. Subject to availability, we may add provisions in some of the CTCs to keep them open at night but nothing concrete has been thought about in this manner, said S.K. Mahajan, Chief Engineer, Delhi Urban Shelter Improvement Board.

Ever since CMC has been formed, we have roped in members, including males, to spread further awareness on sanitation, healthy practices and waste management, beams Anu, a member of the CMC at Indira Gandhi Camp.

Community empowerment has been the backbone of CFAR’s journey in these settlements. Merely ensuring the availability of toilets or dustbins was never the key goal as bringing in behavioural change within the community would have only been possible if people from the community act as glue to bring together others ON a platform designed to share and solve their problems.

There has been constant policy rethinking on issues of urban sanitation in Delhi but the administrative challenges are numerous. The communities have been pushing their agenda for a long time. The community has been mandated to co-manage the structure of sanitation practices and make them better and popularise them further among members of the community, said Akhila Sivadas, Managing Trustee and Executive Director, CFAR.

The empowering of the community comes from voluntary participation in activities in their slums and bringing together as many people as possible to ensure that the importance of concepts of health, sanitation and cleanliness are retained within the community spaces. A few members of the youth group at the Indira Gandhi camp complained of non-participation of some residents of the settlement in keeping the adjoining park clean. Waste continues to be dumped into parts of the park, which young CMC members are trying to convert into a cleaner spot and use for playing. This highlights existing differences among residents of the same community, under similar conditions but with different priorities towards sanitation and hygiene.

It is important to make community members stakeholders. By giving members stake, communities can give them the necessary important platform on which they can stand. All the members must feel wanted and feel that their opinions are important for the community’s functioning, which will ensure that these CMCs remain functional, said Akhila Sivadas.

The improved sanitation conditions in the three settlements are unique because of their non-dependency on state authorities and stress on community empowerment. On the lines of behavioural change that the Swachh Bharat Abhiyan is aiming to bring, community empowerment works within the walls of a community by involving its members so that each individual can become empowered enough to contribute. The successes achieved by the three CMCs in the settlements clearly outweigh the problems they are yet to solve and their united approach is optimistic about finding a way to solve remaining issues. As we near the occasion of World Toilet Day 2017, the undaunted spirit of these community members deserves an ovation for their relentless struggle to work towards better living conditions in their settlements.

Also Read: Women At The Forefront Of Swachh Bharat Abhiyan: Inspiring Stories Of Sanitation Revolution From Across India