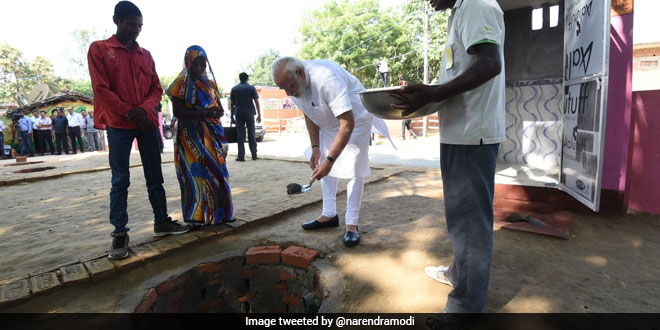 New Delhi: On World Toilet Day, Prime Minister Narendra Modi had reaffirmed the centre’s commitment towards improving sanitation in the country. PM Modi had launched the Swachh Bharat Abhiyan in 2014 with a mission to eradicate open defecation from the country by 2019. Through a short video clip on Twitter, PM Modi reiterated the importance of ending the age-old tradition of open defecation in the country, adding that this is “the best gift that can be given to women.”

On World Toilet Day we reaffirm our commitment towards improving sanitation facilities across our nation. pic.twitter.com/nteYOD6wND

In the same video, he spoke about the revolution of toilets being built in the country under the Swachh Bharat Abhiyan, he adds,

What yesterday was termed as sauchalaya, today is being termed as ‘Izzat Ghar’, thanks to states like Uttar Pradesh.

Today, I am happy to see daughters of India demanding toilets before marriage, school girls are more educated when it comes to their sanitation and hygiene. They see the facilities and then take admission. This wasn’t there before. Earlier, people use to think whatever is being offered is fine, we will suffer. But, the question is why should our daughters suffer.

PM Modi, also commended those that contributed towards driving the momentum of the flagship mission, he adds, “I compliment all those individuals and organisations working towards building more toilets in various parts of India. Their invaluable contribution adds solid momentum to Swachh Bharat Mission.”

I compliment all those individuals and organisations working towards building more toilets in various parts of India. Their invaluable contribution adds solid momentum to Swachh Bharat Mission.

World Toilet Day is celebrated with the aim to eradicate open defecation from the world by 2030 and recognise the action to tackle the global sanitation crisis. The United Nations General Assembly officially in 2013 designated November 19 as World Toilet Day.

Also Read: India Fares Worse Than China And Bangladesh As More Than Half The Population Still Lacks Access To Basic Sanitation, WaterAid Report

The aim of the government is to make approximately 11 crore toilets and end open defecation by 2019 out of which about 5.3 crore toilets have been built so far since 2014.

#PlasticBan: Maharashtra Government Bans Use Of Plastic Bottles In All Government Offices

World Toilet Day 2017: The Empowering Of Communities In Some Of Delhi’s Slums Is Resulting In A Silent Sanitation Revolution