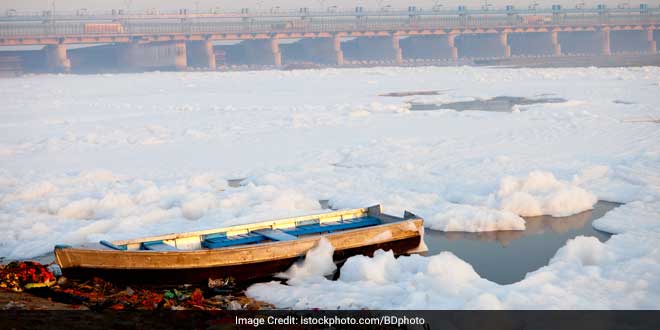 New Delhi: 23-years ago, in 1994, an article in a national daily described the ever-increasing pollution in the Yamuna and went on to report how responsible agencies like the Central Pollution Control Board (CPCB) were not doing anything to stop this. Titled ‘And Quiet Flows Maili Yamuna’, the article caught the attention of the Supreme Court which then instituted a Public Interest Litigation to clean up and prevent pollution in the river. More than two decades have passed, and the problem remains far from being resolved. In the ensuing years, other green bodies were set up, listening to other PILs about the state of the Yamuna.

Read More: How The Yamuna Went From One Of India’s Holiest To One Of World’s Dirtiest

On Monday, the Supreme Court transferred this original PIL to the National Green Tribunal (NGT), to prevent an overlap in proceedings.

“Essentially, this will make no difference. We (NGT) are already looking into the same matter under the Manoj Mishra vs. Union of India. The purpose of the Supreme Court’s decision was to just streamline the process and prevent parallel and conflicting judgments from being passed,” explains RK Goyal, Consultant, National Green Tribunal.

On Monday, a bench comprised of Chief Justice JS Khehar and Justice DY Chandrachud expressed its satisfaction with the way the NGT was dealing with the issue and the orders it had issued so far. It further said that pollution in the Yamuna was a matter that fell in the Green Court’s jurisdiction.

“Having perused the orders passed by the National Green Tribunal, we are of the view that there cannot be parallel jurisdictions to deal with the same issue,” the bench said, “We do not want to sit in parallel jurisdiction. There may be some constitutional issues which NGT cannot handle and they can be brought before us.”

The Supreme Court bench also went through reports submitted by the Delhi Jal Board that detailed its plans to stop pollutants from entering the Yamuna. The most important of these is the Interceptor Sewage Project which aims to divert sewage from three of Delhi’s major wastewater drains, Najafgarh, Supplementary and Shahdra, to sewage treatment plants.

The report also detailed the status of the functional and under-construction sewage treatment plants located on 18 other drains.

The bench responded to these reports by saying, “No timeline has been indicated as to by which time you (Delhi Jal Board) would complete them (water treatment plants). Primarily, you are saying you do not have the money”.

Delhi alone contributes to nearly 70 per cent of the Yamuna’s pollution, according to estimated made by CPCB, and a most of this can be directly linked to the untreated sewage that is dumped into the river by its drains. This makes the completion of the Delhi Jal Board’s projects critical to the Yamuna rejuvenation programme.

Read More: Untreated Sewage: Are Interceptor Sewage Lines Going To Save The Yamuna?

Speaking to NDTV recently, RS Tyagi, Member and Engineer-in-Chief, Delhi Jal Board had said, “We recognize the gap in the utilisation of sewage treatment capacity, our ability to treat the sewage we generate and are working to remedy it. Our ultimate aim is to have a greater treatment capacity than the amount that is generated.”

During the hearing, Solicitor General Ranjit Kumar had noted that “the sum and substance is Yamuna is still ‘maili’ despite the fact that thousands of crores of rupees have been spent on it”.

Responding, the bench said that it now had to look to the future and fix the problem.

“Forget what has gone by. Let us see what can be done now. There is nothing in the report. It is just history,” it said.

Kerala To Form A Common Body To Clean And Protect Rivers