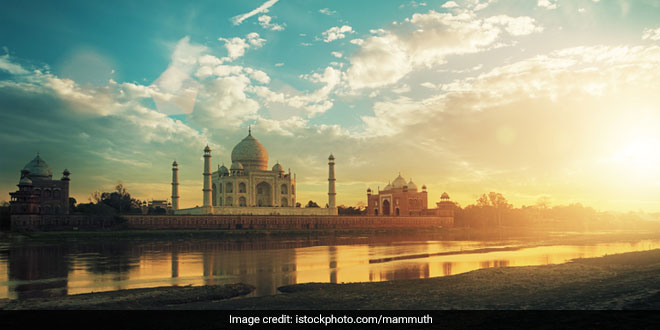 Agra: Environment activists here on Sunday symbolically poured glucose and milk into the “dying and sick” Yamuna river to raise awareness about the chronic pollution plaguing the river. Several members of the River Connect Campaign gathered by the Yamuna to express their concern for the sacred river, considered to be almost “dead” due to pollutants and effluents.

As a token of gesture, they offered boxes of glucose and milk to “Yamuna Maiyya” (mother Yamuna) on the occasion of Mothers’ Day. It was also aimed at showing their affinity and bonding with the lifeline of the historic city. Social activist Shravan Kumar Singh said,

Unfortunately, the river has been reduced to a vast sewage canal.

We have been demanding continuous discharge of water from upstream barrages for the survival of the river and its aquatic life. But so far nothing has been done.

Activists Ranjan Sharma and Shailendra Singh Narwaar said a barrage downstream of the Taj Mahal was the need of the hour, but despite promises by the Yogi Adityanath government, no concrete action had been taken till now.

On pouring of glucose and milk into water, said activists Rahul Raj and Deepak Rajput they were symbolic gestures to highlight the problem that the dying of the river would endanger historical edifices, like the Taj Mahal and the Agra Fort.

Two days ago, Union Minister for Shipping and Transport Nitin Gadkari had said at an election rally in Delhi that within two years tourists would be able to travel to Agra from Delhi on the river in steamers.

A similar promise was made by him in 2015, but no follow-up action had been taken, said Mr. Goswami Nandan Shrotriya who performs the daily Yamuna ‘aarti’ ritual.