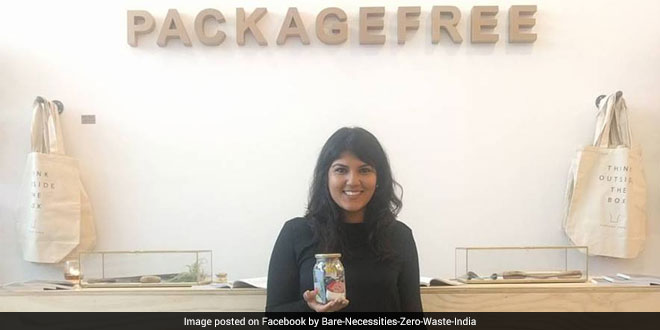 New Delhi: India’s grim reality in the 21st century is the volume of waste it generates per year which is 62 million tonnes and if it is continued at this rate then by 2030 India will need a landfill almost as big as the city of Bengaluru,  to dump all its waste. Keeping in mind the alarming statistics, the government under the Swachh Bharat Abhiyan started to encourage everyone to reduce waste generation at individual levels. Of the many citizens attempting to cut down garbage generation, 26-year old Sahar Mansoor who lives in Bengaluru has actually started living a zero-waste lifestyle.

In 2012 when an environment conscious Sahar was sitting in a ‘World Religions and Ecology lecture at Loyola Marymount Univeristy, she was shown a case study of Bea Johnson’s family practicing zero waste lifestyle. Struck by the family’s efforts, a seed of waste management was sown in Sahar’s mind, “As I was juggling my life between part time jobs and studies in a foreign land, it was difficult to put my thoughts into practice,” said Sahar, who now works at SELCO Foundation as a policy analyst.

However little did she know that another ‘striking moment’ was waiting for her. Two years later she came across Lauren Singer, 24-year old in New York who led a zero waste lifestyle, “I thought to myself, if she can do it, I can definitely make an attempt. The thing about trash is that, we are so caught up in this web of convenience that we don’t think about our personal trash and often attribute to a larger global problem that we have no control over. The only time we think about trash is when we see or smell it stinking up our neighborhood. The truth is that our trash problem is much worse than that—for our environment and our health.”

The Journey To Waste Free Life

To start with, Sahar did a lot of research on why reducing waste generation was the need of the hour. She was startled by the facts, “I couldn’t believe how something as innocuous as our garbage could be negatively connected to so many of my personal and political concerns. I had to address my own trash problem first. I needed to walk the talk,” adds Sahar.

Also Read: Save The Planet, Make A Green Switch: This Woman Is Fighting The Plastic Menace And Has Made Cutlery From Sugarcane

With her grandmother’s guidance, she started taking small steps towards reusing and recycling her personal products. For instance when she ran out of soap, instead of buying new ones, she indulged in some experiments and started to manufacture her own soap. Whenever she stepped out of her house she would carry all the necessities like cloth bags, a bottle of water, spoon. To discard plastic packaging from her life she stopped consuming outside food, “I gave up on food that would have a plastic wrapping,” Sahar adds. 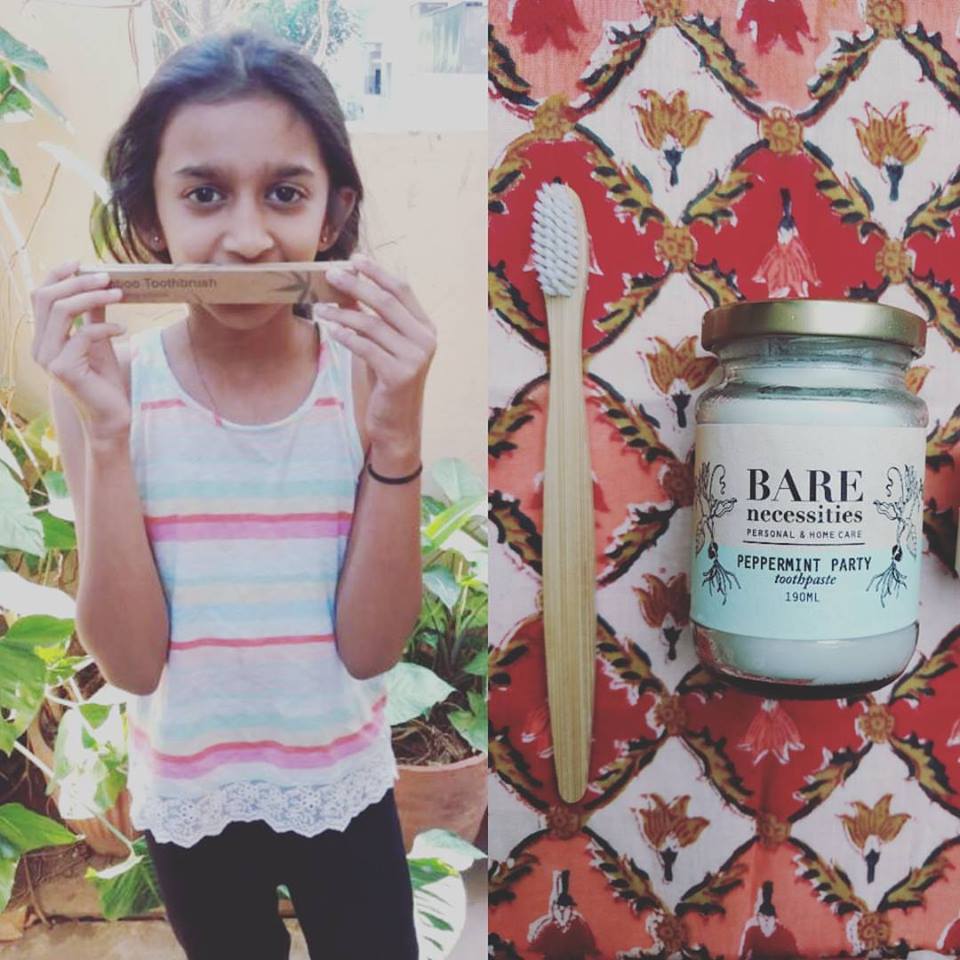 Toothbrush made out of bamboo

At home, she replaced her toothbrush with a toothbrush made out of bamboo. She switched to plastic free feminine hygiene products. When going to office, she started to carry a steel tiffin box instead of a plastic one. From home care products, a zero waste closet to a zero waste lifestyle at work, Sahar is gradually championing the art of generating bare minimum waste. Following images illustrates her zero waste lifestyle: 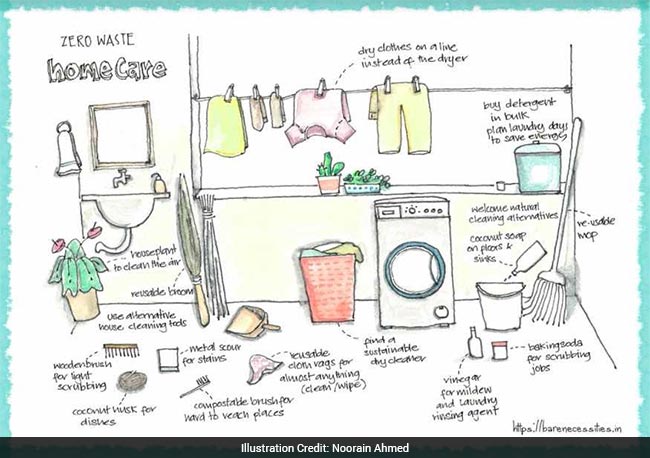 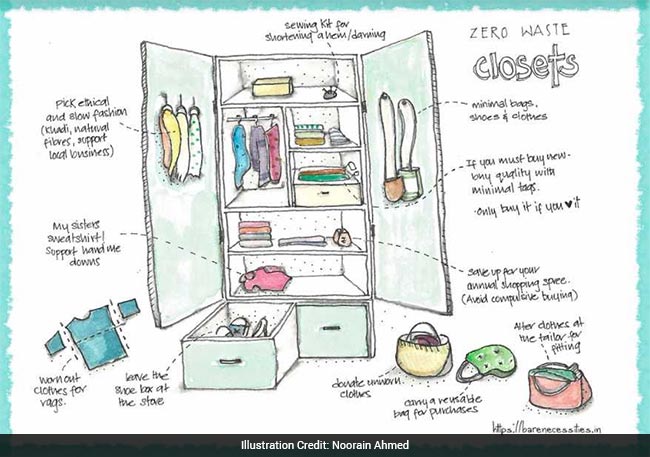 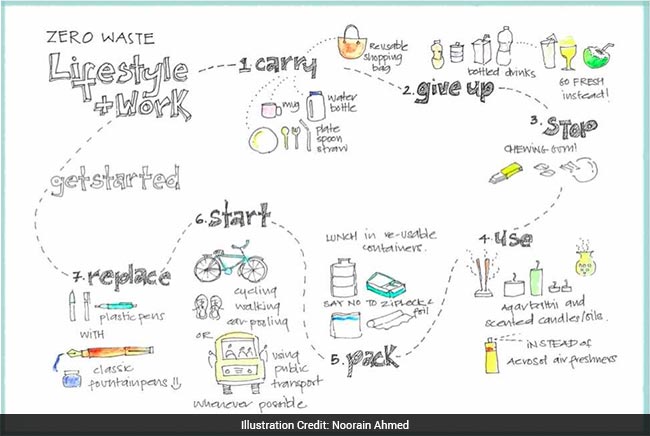 Her remarkable efforts towards systematically avoiding the toxicity of waste were noticed by her friends and family, “My waste management skills started getting appreciation and people often complained how difficult it was to follow such a lifestyle in a city where the scope of reusing or recycling is so less.” It was then that Sahar decided to encourage a zero waste lifestyle in her city and started her own company of making eco-friendly products.

Aptly named as ‘Bare Necessities’, this eco-friendly start-up  of personal care and home care products, is run by five women including Sahar. To ensure she practices what she preaches, the ingredients used to make these products are organic, local and fair trade. Further the packaging used is 100 per cent recyclable, which means nothing ends up in a landfill says Sahar.

Sahar believes that merely implementing her thoughts into a business idea or practicing it at a personal level won’t do justice to the concepts she learnt in her environmental studies. To propagate and spread awareness on leading a life with minimum waste generation, Sahar conducts several workshops across the city at multiple places – from cafes, schools, corporate offices to flea markets. 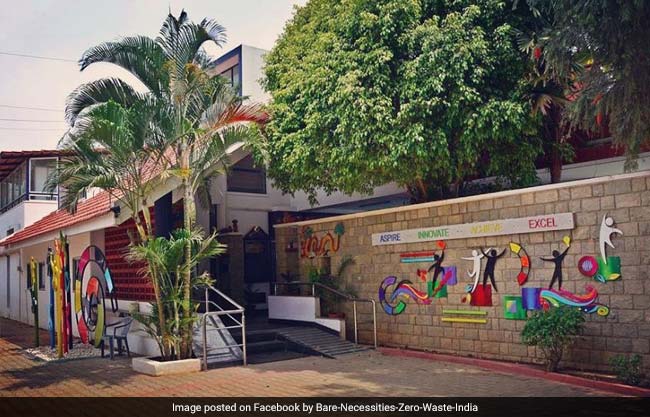 By talking about my experiences, I have not only been able to spread more awareness but I have also imbibed waste management techniques from people. It is truly enriching for me, tells Sahar.

Living in metro city, it was challenging for Sahar to avoid non-recyclable products in her day-to-day life but this didn’t discourage her in pursuing her principles, “Getting eco-friendly products is the main challenge that I faced in my transition period. I have to selectively purchase the products and initially due to lack of expertise I had to do a lot of research before bringing home any item,” adds Sahar.

To keep a track on waste generation, Sahar maintains a jar where she accumulates all her waste. And in last two years she has generated only 500 grams of waste! 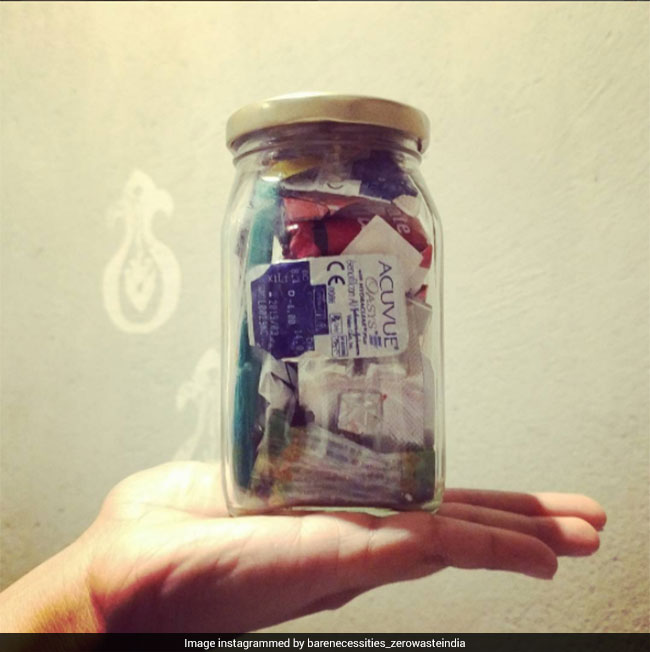 The jar where Sahar collects all her waste

It will take many more years for India to develop an eco-system for zero waste, says Sahar. She believes five factors are needed before Indians can fully adapt a zero-waste lifestyle –  Awareness, right products, rights places (sustainable products are easily available everywhere), right price and government policies that encourage a waste free economy.

Quite the contrary leading a Zero Waste lifestyle is simple, cost-effective, timely, fun, & entirely possible for everyone and anyone. It’s not just for granola hippie people – your grandmother was probably a zero waster, Sahar signs off.

Also Read: Waste Management: This Lone Ranger In Remote Uttar Pradesh Goes Against All Odds To Get 300 Households To Segregate Waste

This Social Enterprise In Bengaluru Is Recycling E-Waste