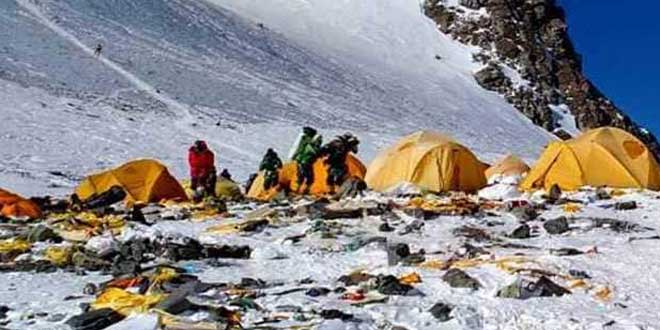 Beijing: China has closed the Mount Everest base camp in Tibet to tourists who do not have climbing permits in order to deal with the mounting garbage problem at the site. The decision, officially announced last month, came to public attention in the past couple of days after reports claiming the base camp of the world’s highest mountain had been permanently shut down went viral, the South China Morning Post reported on Thursday.

Officials, however, denied that the base will be permanently closed. The ban means tourists can only go as far as a monastery slightly below the 5,200-metre base camp level. More people visit the mountain from the southern side in Nepal, but over the past years, numbers have been rising steadily on the Chinese side as well.

Also Read: Garbage A Ticking Time Bomb In India, Will Have ‘Disastrous Consequences’ If Not Checked, Say Researchers

On Thursday, state news agency Xinhua quoted Kelsang, Deputy Director of the Mount Everest Reserve’s administration, as saying that ordinary tourists would be allowed to visit areas around Rongpo monastery, at almost 5,000 metres above sea level. Mountaineers with a permit to climb the 8,848-metre peak will still be allowed to use the higher camp.

China designates the area of the reserve over 5,200 metres above sea level as a “key area”. The limited number of climbers allowed in would also be required to meet stricter rules to protect the environment, an official from the Chinese Mountaineering Association (CMA) told the Post.

The news was officially released on the website of the Tibetan government in mid-January. Calling it further action to protect Mount Everest, the statement said workers had collected 8.4 tonnes of rubbish from the key area last year.

In the regions below that level, 335 tonnes of waste had been collected. A task force of 200 people will be formed to clear the remaining rubbish, officials said.

Ci Luo, a Tibetan climber and Director of the CMA’s Alpine Adventure Department, said those with permits to go to base camp “will now be required to carry all their waste out with them”.

The total number of people allowed to climb the mountain from Tibet has been limited to fewer than 300 this year, while the climbing season is restricted to spring, the report said. The CMA says 40,000 people visited the base camp in 2015, the most recent year with figures. A record 45,000 visited Nepal’s base camp in 2016-17, according to Nepal’s Ministry of Forests and Soil Conservation.

According to a BBC report, this year’s clean-up efforts will also try to remove the bodies of mountaineers who died in the so-called death zone above 8,000 metres, where the air is too thin to sustain life for long. Due to the cold and high altitude, these bodies often remain on the mountain for years or even decades.