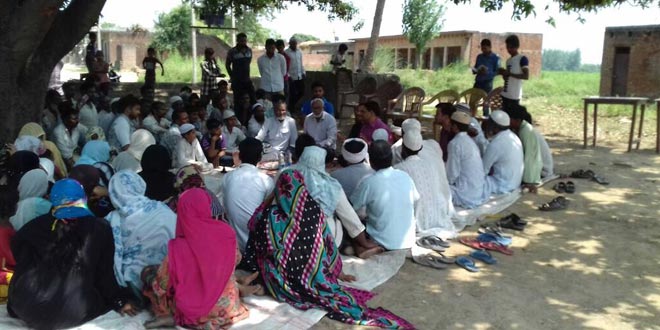 New Delhi: As the government is assigning huge amount of funds for toilet construction to make the country open defecation free (ODF) by 2019, 13 villages from Bijnor district, Uttar Pradesh are returning the allocated funds to the local panchayats and building toilets with their own money. Marking the holy month of Ramzan, residents of Mubarakpur Kala village are financially helping families with extreme poverty to help construct toilets. Further, they have asked the panchayat committee to use the money given for toilet construction in improving other facilities like health, roads, etc. of the village.

The practice of defecating in open has officially ended on June 9 after a ‘toilet accessibility’ inspection was carried out in 601 families of Mubarakpur Kala by the gram panchayat officials. When a survey was conducted it was found that nearly 146 households lacked toilets, of which 138 relative’s could access either to community toilets or  toilets in relative’s house. Thus the practice of open defecation in these households was ended.

However, there still remained 8-9 families which had no option but to relieve themselves in the open. It was then that the village community returned Rs17, 56,000 given for constructing toilets in 146 households to the panchayat and proposed that they use their neighour’s toilet on a sharing basis until toilets are constructed in each of these houses with no access to toilets. “Once the proposal was accepted by all the people and the panchayat heads, the practice of open defecation came to an end,” Indramani Tripathi, Chief development officer, Bijnor District told NDTV.

We urged people to use their relative’s, friend’s or community toilets and lead a healthy life. Bringing an attitudinal change is more important than having a toilet. There is no point in having toilets if people are still defecating in open. Hence we aiming at a mindset change before toilets are built in all the houses, Mr Tripathi.

A similar move was undertaken by 12 other villages. The number of toilets varied from village to village and a total of Rs60,00,000 from 13 villages were returned to the government said Mr Tripathi. While Mubarakpur is on the verge of getting an ODF certificate, the aforementioned villages have already been given the ODF certificate.

The campaign of making the district open defecation free is directly linked to respecting the women of the villages, “Women are huge sufferers when it comes to open defecation. It was increasingly getting difficult for women of the house to defecate in the dark and unsanitary conditions. Hence, the entire campaign of toilet construction was pitched to people as protecting women’s dignity,” says Mr Tripathi.

Thus, the coined term ‘Izzat Ghar’ (Dignity House) was carved on every toilet to honour women and value the importance of toilets in an individual’s life. And the villages that have used the toilet construction money in improving other utilities of the village are addressed as ‘Izzatdar Gaav’ or Respectable Village.

Calling the success of eliminating open defecation as effective community participation, Mr Tripathi concludes, A change in mentality combined with behavourial change was all that was needed to abolish this unhealthy practice.