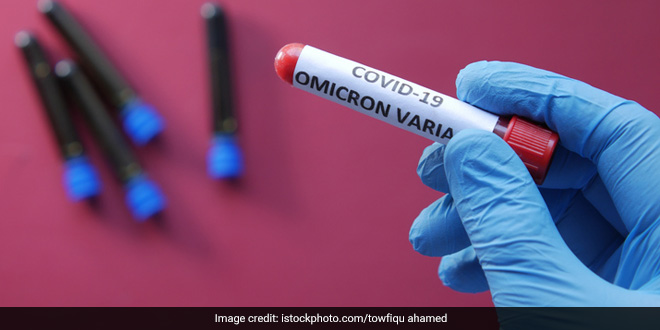 India’s tally for new variant of #COVID19 - Omicron reaches 21. Experts explain how prepared India is to manage the surge

New Delhi: India’s Omicron tally is steadily rising with fresh cases being reported in Maharashtra, Rajasthan and Delhi. NDTV speaks with experts who are directly involved in fighting the spread of Omicron in these states to tell us about the latest strain of COVID-19 that the World Health Organization has tagged as ‘Variant of Concern’, as this strain has more mutations than any other variant seen in the past. Till now, in India, eight cases of Omicron variant has been reported in Maharashtra, nine in Jaipur and one in Delhi, taking the total count in the country to 21.

We are the country where vaccination drive has been intense. Almost 90 per cent people have taken single dose of the vaccine and 50 per cent have taken both the doses of the vaccine. All the medical literature confirms that the vaccination will protect people from severe/critical form of the disease. Although there are certain issues with Omicron like increased transmissibility, high viral load, but those who are double vaccinated will definitely be protected from developing a severe form of disease even in this strain. Doctors in South Africa, who have been dealing with this strain have confirmed. Even the cases we are seeing, for now, it seems that people are developing a mild to moderate form of disease and one of the reason can be the vaccination, as all the cases we have got are those, who have been fully vaccinated.

Dr Bhandari further said that the only concern with this strain of COVID-19 is that it is affecting more younger population and the transmissibility is very high.

Highlighting will India be able to stem the surge, Dr Bhandari added,

We can be hopeful that this variant will not be as deadly as what we have seen in past. Currently, our focus is on – tracing, tracking and treating. The moment these four foreigners arrived in Rajasthan from South Africa, who have now been confirmed positive for Omicron, we immediately tested them, kept them under-observation, quarantineD them. These people came in touch with around 35 people in total and traced and tested them all. Five out of those were found omicron positive, currently all are under observation.

India has been very responsive, compared to what we have seen last year with delta variant. Within no time in last few days with the Omicron variant coming into the picture, India started taking steps. Measures were put in place at airports, people were isolated and whole process of testing, tracing was started. Lastly, we are getting genome sequencing report much faster in comparison to the last year. In Maharashtra, similar steps have been taken – testing, tracing and treating have been the key steps. We have traced all the contacts of the seven people who have been tested positive in the state. Reports for all are awaited but we have already isolated every individual and are treating all of them with utmost care. Most of them are showing the mild disease symptoms and that I think is the silver lining, which gives us hope to fight this strain.

Currently, international airports across India are intensively screening and testing all passengers from ‘at-risk’ countries. In line with central guidelines, all passengers from such countries have to take RT-PCR tests on arrival. The test result has to be negative in order to leave the airport. The list of countries deemed “at-risk” for now include the United Kingdom, all 44 countries in Europe, South Africa, Brazil, Bangladesh, Botswana, China, Mauritius, New Zealand, Zimbabwe, Singapore, Hong Kong, and Israel.

Though WHO has tagged this variant as ‘variant of concern’, researchers are still checking if Omicron is more lethal and if current vaccines offer protection.

According to the doctors of South Africa, who have been dealing with this strain, the variant as of now seems to the one with mild symptoms but with high viral load and transmissibility.

Next Pandemic Could Be More Lethal Than COVID, Vaccine Creator Says