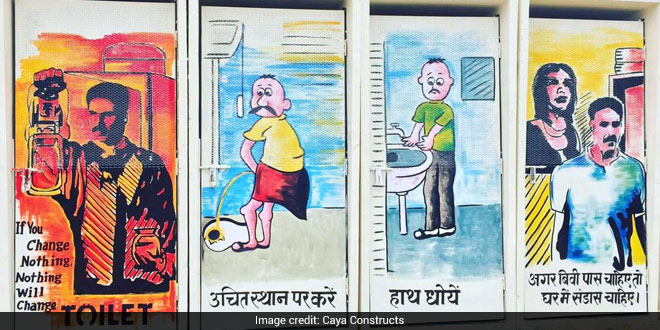 Actor Akshay Kumar is losing no opportunity to use his upcoming movie, Toilet: Ek Prem Katha to spread awareness about ending open defecation, and promoting the use of toilets. He recently came up with a unique way to gift toilets in different parts of the country. The film in collaboration with Caya Constructs, a sanitation and drinking water organisation, unveiled 24 newly built toilets in 24 hours on the actor’s Instagram story, starting from 8 am on August 7.

The actor tweeted, ”Taking a step towards Swachh Azadi, an organisation named Caya Constructs in association with my film Toilet Ek Prem Katha has built toilets across the country. Over the next 24 hours, my Instagram story will unveil one toilet every hour. So guys keep on watching – #24 hours24toilets.”

Stay tuned to my #Instagram story…over the next 24 hours we'll be unveiling one Toilet every hour! Watch #24Hours24Toilets! @ToiletTheFilm pic.twitter.com/GdUwEbJxGJ

The organisation Caya Constructs in association with the film had constructed 80 community toilets in last one month in semi-urban areas of Jaipur, Delhi, Rewari, Mohali, Karnal, Panipat, Gurugram, Yamuna Nagar, Narnaul and Kota.

Brushesnstrokes, a group of artists, had created innovative artwork on these toilets that included images from Toilet: Ek Prem Katha and its quirky dialogues that highlight the message of ‘freedom from open defecation.

The artwork was done simultaneously with the construction of these toilets. The whole aim is to make India ODF and encourage the usage of toilets in rural areas. Every toilet has a message for the people, Harshi Agarwal, founder of Brushesnstrokes tells NDTV.

These toilets were inaugurated by the local people, as opposed to dignitaries.

As a part of #24hours24toilets campaign, Caya foundation also launched a special comic book for children named Toilet: Ek Prem Katha, designed by Brushesnstrokes. The plot and characters of the book are taken from the movie and is educative, where protagonists – Jaya and Keshav take on the role of educating villagers about the importance of having a toilet.

Earlier this week, Akshay Kumar along with his co-star Bhumi Pednekar had joined Uttar Pradesh Chief Minister Yogi Adityanath for a cleanliness drive in Lucknow. They took a Swachhta pledge to ensure cleanliness and maintain sanitation. Akshay Kumar was appointed the state’s Swachh Ambassador. The actor also released a song titled ‘Toilet Ka Jugaad’ which is a satirical take on the rampant issue of open defecation in India. The movie is slated to release on August 11.