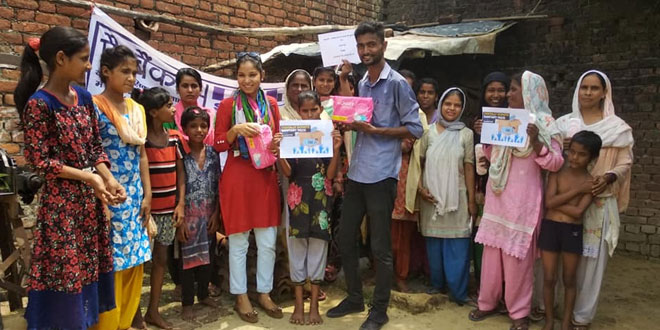 Mumbai: In a country like India where the conversation around menstruation has always been brushed under the carpet, for a man to talk about it is challenging. Fortunately, for Chitransh Saxena from Bareilly, Uttar Pradesh it was different. In his teenage years, Chitransh’s mother cleared his doubts on menstruation instead of ignoring his curiosity. A few years later when he entered his early twenties, his concern regarding lack of menstrual hygiene grew on working with a local NGO that dealt with the subject. It was the during the same time when he was pursuing a degree in Information Technology (IT). He decided to switch his profession and started working in the field of social work full time.

Talking about his wake-up call, he tells NDTV,

Before starting my journey for social work, I was pursuing a degree in IT but something was not right. My passion always leaned towards contributing to the society and uplifting the underprivileged. Watching PadMan movie was the triggering point for me. Arunachalam Muruganantham’s story inspired me and made me realise that men can play a huge role in breaking the period taboo.”

Chitransh’s mission was clear – to educate maximum number of women about the menstrual hygiene and start a PadBank to provide sanitary pads for free. In PadBank, anyone can donate sanitary pads and if one cannot donate, he/she can donate money. Chitransh tapped social media networking sites and deployed word of mouth, through his family, friends and relatives, to spread the word about the initiative. 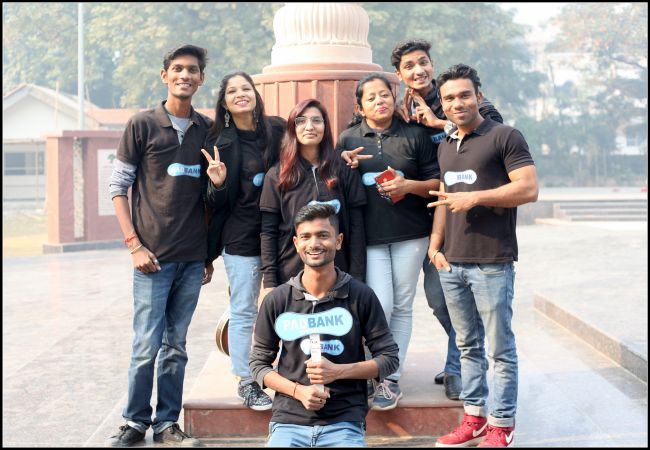 Chitransh Saxena with his team members

Within no time, what started as a one-man journey increased to a 15-members team. Individuals, corporates and students are now working part time to help Chitransh reach every corner of the city and make a difference.

Also Read: West Bengal’s Nadia Is Educating School Students About Menstrual Hygiene Management With One Of A Kind Initiative

I am happy to be a part of PadBank. I realised how people survive in rural areas during their mensturation cycle. We are trying to show that periods are normal and there is nothing to be ashamed about. I wish every girl has the courage to ask her father to buy a sanitary pad packet instead of asking her mother, says Nitika Singh Gaur, one of the volunteers at the foundation.

With 19 sanitary pad donations, the team kickstarted the project in the city on June 22, 2018. It targeted several places, from schools, slums to households and started organising awareness programmes. Initially when they undertook these visits, people were hesitant to be a part of it. 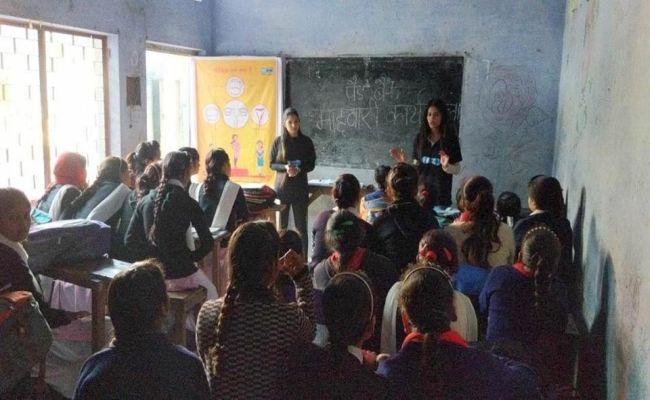 While schools readily came on board for awareness programmes, female members of the house were not ready to talk about it, thanks to years of stigma around menstruation. Many women were shy to talk to male members of our team and so in such households we started sending only women, recalls Chitransh.

However, what came as a surprise to Chitransh was the curiosity and willingness among women and girls to talk about menstrual hygiene but due to presence of male members they often kept quiet.  To address this problem, the team would make their visits in the afternoon when their husbands would be at work.

Also Read: Girls To Get Sanitary Pads In Over 100 Government Schools Of Vadodara

At the end of the 3-hour workshop, the team distributes passbooks to girls and women who cannot afford a sanitary napkin. Every month, the PadBank visits the girls who have enrolled in the bank and distributes eight sanitary napkins for free. 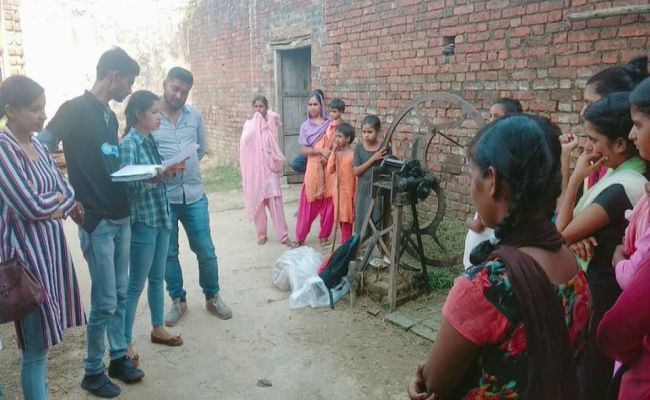 Every month, the PadBank visits the girls who have enrolled in the bank and distributes eight sanitary napkins for free

Till now, 148 girls from across the city have registered with the bank. In other words, 148 girls have switched from cloths, leaves and ashes to sanitary napkins. “From people ridiculing and shaming us in the beginning to now families approaching us to be a part of the bank, the journey has been tremendous for us,” says Chitransh.

Setting A Record In Uttar Pradesh

Going big on their initiative, the team displayed 1,720 sanitary napkins at Gandhi Udyan public park in December last year. The idea was to put it out in open and see how people reacted to sanitary pads. The pads were placed in a way to form the shape of a sanitary pad. The dimension the display was 22 feet length and 11 feet width. For creating the longest line sanitary napkins, the Uttar Pradesh Book of Records presented them with a certificate in January this year.

People, youngsters specially, gathered around the display taking selfies by holding a pad in hand. Looking at the opportunity, the team spoke to people about menstrual hygiene and the PadBank, requesting them to make a donation.

Chitransh’s next project is to conduct workshops exclusively for men and boys. He has also started an online campaign on twitter and Instagram ‘Let’s talk about period’. Under this campaign, the team is making an appeal to their followers to make a 30-second video and talk about menstrual hygiene. It can range from various topics – menstrual waste, eco-friendly sanitary napkins, things to know about menstruation, menstruation myths and so on.