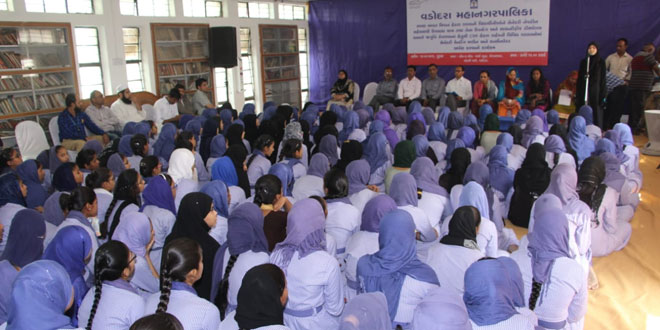 On February 13, VMC commissioner Ajay Bhadoo inaugurated a sanitary pad vending machine set up at the MES High school, Nagarwada and said that such vending machines have been installed in 10 other civic-run schools in the city.

સ્વચ્છ ભારત, સુવર્ણ ભારત | Under the #SwacchBharat mission, Sanitary Pad vending machines and incinerators were installed in different schools for easy availability and disposal of the Sanitary pads for girls. #HealthyVadodaraPromise#HygienicVadodaraPromise#SmartBaroda pic.twitter.com/htn2Dzwrcw

Talking to NDTV on why the VMC took the decision to installing vending machines in schools, Deputy Municipal Commissioner Pankaj Aundhiya said,

We always keep our bodies clean to prevent any kind of illness or infection. But when it comes to periods, women tend to shy away from doing so due to the century-old taboo attached with it. We want to abolish that perception and the best way to do so is target the school girls. They are young enough to be moulded and old enough to understand the gravity of the problem. 10 out of 104 schools have got the machines. The rest will get them soon.

Along with the vending machines, the civic body has also installed incinerator units to scientifically dispose of the menstrual waste. Irresponsible disposal of used sanitary napkins is a health hazard and can spread diseases. To ensure that disposal of sanitary napkins is safely done, the VMC plans to install incinerators in rest of the schools within the next few months.

Merely providing a facility is not enough, it needs to be used as well to see the difference, believes Mr Aundhiya. The officials, thus, gave the students a live demonstration on how to access a sanitary napkin from the machine and dispose it in the furnace.

Sanitary pad vending machines such as these, along with safe disposal incinerators are being installed free of cost in all girls' high schools of Vadodara city by @VMCVadodara . pic.twitter.com/Z2uYfx7ZxO

All one has to do is insert a Rs 5 coin in the vending machine and press the button that will release the sanitary pad. The reason behind the low rate of sanitary pads is to promote the use of sanitary napkins and make it a habit.

If successful, the civic body will expand the project to college and Girl’s hostels and offices as well, confirmed Mr Aundhiya.

Also Read: West Bengal’s Nadia Is Educating School Students About Menstrual Hygiene Management With One Of A Kind Initiative

Related Topics:
Gujarat Menstrual Hygiene Menstruation In India
Up Next