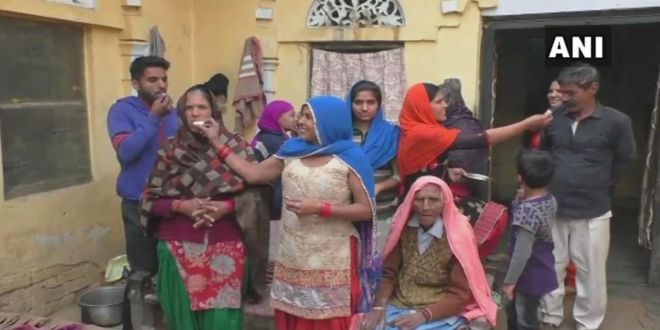 New Delhi: “Winning the Oscar for ‘Best Documentary – Short Subject’ was not an easy task for the makers of India-based documentary ‘Period. End of Sentence.’ as it required 20 years’ worth of hard work and struggle,” said Sneha and Suman, who manufacture sanitary napkins in the village and have been featured in the short film. The two ladies also went to America to receive the Oscars and villagers were proud of their superstars. Talking about her struggles Sneha told ANI,

“This was not a day’s struggle, or a year’s struggles, the award bears testimony to 20 years of hard labour. Our unit team included seven workers – Sneha, Rakhi, Sushma, Rinki, Preeti, Ruksana and Arsi. It would have been difficult to make this film and fight for this cause without them.”  Suman added,

We have received success today on a topic on which we can’t even talk about in public. Periods, which are looked down upon in the society, we have been able to work towards raising awareness about it. Our aim is not just to sell sanitary napkins. Our aim is to make people accept cleanliness during periods. We want all women to understand this and take care of their hygiene. If our voice reaches to a single girl, then we feel we have received success.

The 26-minute short documentary, co-produced by Guneet Monga and directed by 25-year-old Rayka Zehtabchi, follows a group of women in Hapur, Uttar Pradesh who lead a quiet revolution as they fight against the stigma of menstruation that is deeply rooted in society. Along with the women, their families are ecstatic with their win, as the entire village celebrated the triumph and titled it as ‘victory for Kathikera’.

It is based on my sister’s life, but not just my sister, everyone related to the film should get credit for the film’s win. The director and actors of the film, all deserve the award. It’s a very happy moment for all of us in Kathikera.

I am feeling very happy and proud. We come from a small village and we didn’t know about this earlier. We had worked very hard on this and so we are feeling very proud. We are very happy that the movie based on our company ‘fly’ and our work has got an award.

I don’t know what an Oscar award is but I have learnt that my daughter-in-law has achieved something big.

While her husband Balraj said,

She has not seen even nearby places and now she has gone to America. It is a benchmark for success. We as a family have supported her in her struggle.

Sneha’s father Rajender who did not support her for this work initially is now proud of his daughter after she achieved such a prestigious award.

I wanted her to study and prepare for Delhi police and UP police exams but she said she will do something for women empowerment. She was determined and convinced me that it won’t affect her studies.

Although it is a taboo to talk about menstruation and sanitary pads in our community I openly communicated with her about this subject. I am very happy with what she has achieved today. She has made the whole country proud.

Another girl Ruksana said that she will welcome her friends Sneha and Suman with garlands when they come back.

I am eagerly waiting for them to come back. The whole village is very happy. It was unbelievable when I heard it first.

Bollywood too erupted with happiness. From Akshay Kumar, Priyanka Chopra, Vicky Kaushal among various B-Town celebrities took to Twitter to congratulate the film’s team on the big win. The film was nominated along with ‘Black Sheep,’ ‘End Game,’ ‘Lifeboat’ and ‘A Night At The Garden’ in the category.

The village Katikhera is now waiting with much fervour for their daughters to return with the award.

Kerala Gives Push To Its Electric Journey, Rolls Out Five New Buses That Can Run For Over 200 Km Range On A Single Charge

Delhi Budget 2019-20: With An Allocation Of Rs. 100 Crore, Electric Vehicles Get A Big Push In The Capital