New Delhi: Sonbhadra, the second largest district of Uttar Pradesh, entered the record books when over three lakh people got together to form a 140-km long human chain recently, to spread the message of safe sanitation and hygiene in every household in the district. The activity was undertaken to mobilise village communities from across the district to bring about behavioural change, with an aim to make the district open defecation free by October 2, 2018. In the process the district entered the Limca Book of Records, for forming the longest human chain to create awareness about the menace of open defecation. The previous record was held by the people of Nadia district in West Bengal who created a 122.3 km long human chain to create awareness about ill-effects of open defecation on February 21, 2015. Over 2.17 lakh individuals had formed this human chain.

Objective of this mass awareness campaign

Ever since the launch of Swachh Bharat Abhiyan in 2014, Sonbhadra’s sanitation coverage has been progressing slowly – it increased from 30 percent to just 59.05 percent with the construction of over one lakh (1,02,214) toilets. In an effort to accelerate the Swachh Bharat Mission Gramin (SBM-G) campaign, the district authorities came up with this idea of forming a human chain to raise awareness among people and accelerate the construction of toilets.

Village communities in Sonbhadra district of #UttarPradesh came together to make a 140 km-long human chain to spread the message of safe #sanitation and hygiene in every household. In doing so, they made a world record too! To read their story, visit: https://t.co/kZ5Ep4rBMr pic.twitter.com/d0HFJjrOLe

How the 140-km human chain was executed

Speaking to NDTV, the District Project Coordinator, Swachh Bharat Mission (Gramin), Anil Keshari said that the entire route of 140 km in length was divided into three Super Zones, which were headed by additional district magistrate rank officers. These Super Zones were further segregated into 13 Zones, 26 sectors and over 130 booths, the supervision of which was carried out under the guidance of Zonal or Class I officers of the district, who were placed at intervals of every 10 km.

For smooth formation of this human chain, the sector officers were also deployed at intervals of every 5 km along the way, and they supervised the Booth Officers who were placed after every km. Furthermore, sub-booth officers were deployed under the Booth Officers at every 100 metre stretch, so that every individual contributing towards forming the human chain was under the scanner of the district authorities.

Markings were clearly shown on the roads with the help of flags and hoardings at specific landmarks. And over 2500 officials and staff, along with school headmasters and teachers, Anganwadi and ASHA workers, the village pradhans and secretaries and other officials and staff of various departments were trained to look after the management of the entire event and to provide drinking water to people, said Mr Keshari.

Along with men and elderly, school children and women across the district participated in the event in huge numbers.

In the run up to the event, proper guidelines for participant management and training were provided to school authorities, village pradhans and anganwadi heads by the district officials, through regular meetings both at the block and village levels.

A number of mock drills and meetings were conducted to analyse the kind of difficulties that might arise and plans were put in place to ensure a seamless event. Over 100 buses were arranged to transport people from distant blocks to the event venue and back to their respective villages. And to provide first-aid for any medical emergencies, about 26 ambulances were kept available every 5-km.

During this activity, a number of banners and posters were also put up to promote the idea of safe sanitation. Also, the people were encouraged to call out slogans against open defecation and other ill-practices when it came to sanitation.

The event went a long way to spread awareness about sanitation, not just in the state, but across the entire nation. This initiative, though not the first of its kind was much larger in its extent, and hence, the effects of it are expected to remain in the memory of people across the district and the country for a longer time, Mr. Keshari said.

The District Magistrate of Sonbhadra Amit Kumar Singh, along district officials consider this as the biggest and most effective of all mobilisation activities to have ever been conducted in the state, involving women, men, children, youth and elderly from all sections of the society. 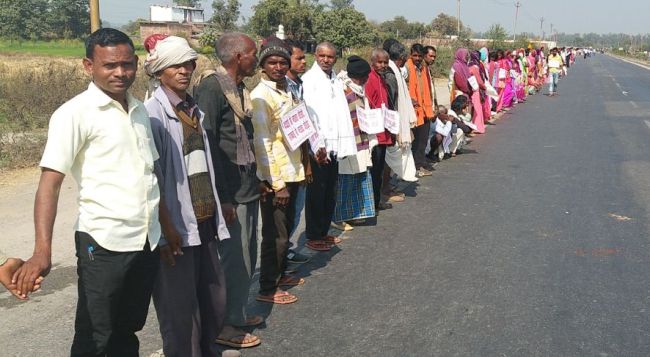 We originally planned for a 130-km long human chain, but the huge participation of people made it about 140-km, added the district official.

After forming the human chain, all the participants took an oath to work towards an ODF district. The officials and people of the district hope that their event will motivate people across the country to work for the cause of sanitation, health and a clean tomorrow.

Ready To Administer Covid-19 Vaccine If No Side Effects, Says Telangana Chief Minister