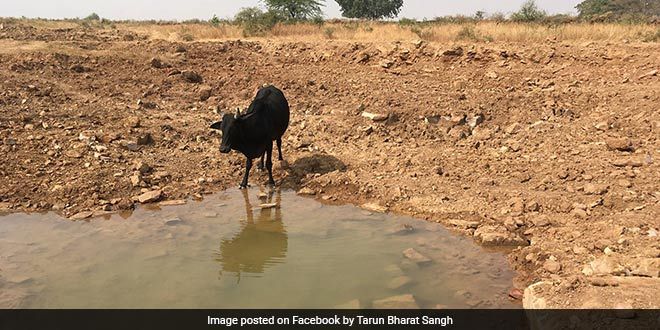 New Delhi: Understanding that water is a finite and irreplaceable resource fundamental to human survival, especially in Rajasthan, which has the country’s 10 percent land area but only 1.1 percent of the total surface water. A non-governmental organisation Tarun Bharat Sangh used nature-based solutions like rainwater harvesting to improve the supply and quality of water in the state. They supported the local communities to undertake landscape-scale restoration of local water cycles and water resources in Rajasthan when it was facing one of the worst droughts in its history in 1986. Through their efforts over the past three decades, the organisation brought back water to around 1,000 drought-stricken villages, for which they have now been lauded in a United Nations World Water Development Report 2018, which highlights the importance of finding nature-based solutions to meet global water challenges.

Speaking about how clean is the water, conserved through rainwater harvesting, for drinking purposes, Chaman Singh, Manager, Tarun Bharat Sangh, explained that the water conservation is done through natural processes, which makes the water suitable for drinking purposes. “So far, there have been no complaints about the contamination of water that is conserved through nature-based solutions,” he further added.

‪With leadership provided by women, who customarily take responsibility for providing their families with safe freshwater, traditional local initiatives for water were revived by bringing people together on the issues of management of forests and water resources, the United Nations said in its report.

“As a result of our concerted work, we have managed to build thousands of johads. We are playing the role of a facilitator. All our efforts have been made possible by active participation from villages. The activities expanded progressively in collaboration with local people as funds were attracted from national and significantly from international donors,” said Rajendra Singh, Chairman, Tarun Bharat Sangh.

In its report, the United Nations also mentioned that the organisation brought water back to 1,000 villages across the State, and five rivers that used to run dry after the annual monsoon season, are now flowing again and fisheries in them re-established. In addition to this, the groundwater levels have risen by an estimated six metres; productive farmland increased from 20 percent to 80 percent of the catchment; crucial forest cover, including in farmlands, which helps to maintain the integrity and water-retaining capacity of the soil, has increased by 33 percent; and the return of wildlife such as antelope and leopard has been observed, reads the UN report.

‪Over the years, the Tarun Bharat Sangh worked alongside local communities to regenerate soils and forests in the region by setting up water harvesting structures. Since 2002, the organisation has been doing work similar work in Uttar Pradesh, Bihar, Uttarakhand and Jharkhand.

‪In 2015, Mark Everard, Associate Professor of Ecosystem Services at the University of the West of England undertook a science-based assessment of the activities undertaken by Tarun Bharat Sangh, confirming its claims in providing safe drinking water to people.

‪The case study of Tarun Bharat Sangh in Rajasthan, India, presents an excellent example of the way in which community-led landscape approaches can improve both groundwater recharge and surface water availability through combining the management of soil, vegetation and structural (physical) interventions. According to United Nations report, five billion people are at risk of having difficulty accessing adequate water by 2050 and finding nature-based solutions is becoming increasingly important.

From Sanitation Coverage Of Less Than 30 Per Cent In 2014 To Going Open Defecation Free In 2018, Here’s Rural Rajasthan’s Swachh Turnaround Story