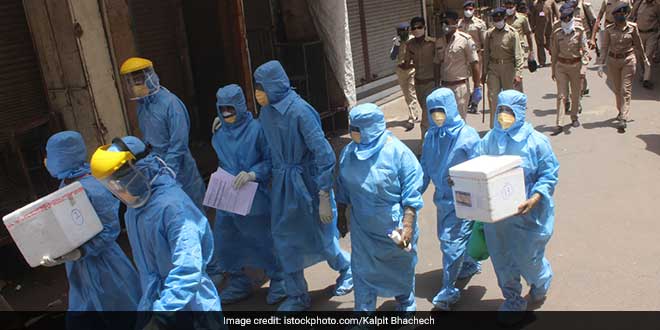 The test positivity rate of Covid declined to 6.14 per cent

New Delhi: Delhi on Tuesday (August 23) recorded more than 50 per cent rise in daily Covid cases to 959 while nine people died, according to data shared by the city health department. However, the test positivity rate declined to 6.14 per cent, as the fresh cases came out of 15,631 tests conducted the previous day, the department said in its latest bulletin. With the fresh cases and fatalities, Delhi’s infection tally increased to 19,95,407 and the death toll to 26,436, it said. On Monday (August 22), Delhi had reported 625 fresh COVID-19 cases and seven deaths, while the positivity rate stood at 9.27 per cent.

Before this, Delhi logged more than 2,000 cases for 12 consecutive days.

Of the 9,407 beds reserved for Covid patients in various Delhi hospitals, 465 are occupied, it said, adding there are 285 containment zones in the city.

Despite the high positivity rate being seen in Delhi recently, the city government did not implement the Graded Response Action Plan (GRAP) devised by the Delhi Disaster Management Authority since hospital admissions remained low. The GRAP, which came into force in August last year, stipulated measures to be taken by the government in accordance with the positivity rate and bed occupancy for locking and unlocking of various activities.