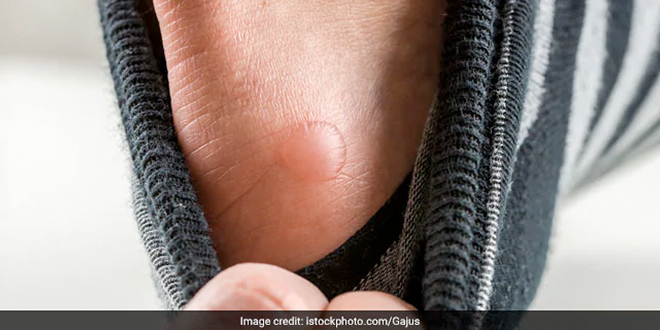 Children must be educated about the signs and symptoms and side-effects of tomato flu: Centre

New Delhi: India has recorded about 82 cases of ‘tomato flu’ in children to date. In light of these rising cases, the Central government issued an advisory on the disease where it said that the flu seems to be a variant of Hand, Foot and Mouth Disease (HFMD). Furthermore, it stated that tomato flu occurs mainly among children under the age of 10, but is said to be rarely prevalent among adults as well. The advisory asked the states to follow preventive measures, stressing that there is no specific medication to treat the viral disease as of yet.

It seems, the disease is a clinical variant of the so-called hand-foot-mouth disease (HFMD) that is common in school going children. Infants and young children are also prone to this infection through use of nappies, touching unclean surfaces as well as putting things directly into the mouth. HFMD occurs mainly in children under 10 years of age, but it can occur in adults too, read the advisory.

Also Read: Lancet Warns Of “Tomato Flu” Outbreak Among Children In India. Here Is All We Know So Far

Tomato flu or tomato fever is a viral disease, which derives its name from its main symptom, the tomato-shaped blisters on several body parts, said the advisory. It is a self-limiting disease, as the signs and symptoms resolve after a few days. The blisters start as red-colored small blisters and resemble tomatoes when they enlarge.

Primary symptoms observed in children with tomato flu are similar to those of other viral infections, which include fever, rashes and pain in joints. The symptoms also include fatigue, nausea, vomiting, diarrhoea, fever, dehydration, swelling of joints, body aches, and common influenza-like symptoms.

It begins with mild fever, poor appetite, malaise, and often a sore throat. One or two days after the fever begins, small red spots appear which changes to blister and then to ulcers. The sores are usually located on tongue, gums, inside of the cheeks, palms and soles.

In children with these symptoms, molecular and serological tests are done for diagnosis of dengue, chikungunya, zika virus, varicella-zoster virus, and herpes. Once these viral infections are ruled out, a diagnosis of tomato flu is considered, read the advisory.

Children must be educated about the signs and symptoms and side-effects of the illness, it urged.

Although the tomato flu virus shows symptoms that are similar to other viral infections including fever, fatigue, body aches and rashes on the skin, the virus is not at all related to SARS-CoV-2, monkeypox, dengue and chikungunya, said the Centre.

In fact, recent reports have suggested it to be Coxsackie A 17, that belongs to the group of enteroviruses, the advisory added.

Till now, no antiviral drugs or vaccines are available for the treatment or prevention of tomato flu.

There are no disease-specific medications available, it said, adding that treatment is similar to other viral infections – isolation, rest, plenty of fluids and a hot water sponge for relief of irritation and rashes.

Supportive therapy of paracetamol for fever and body ache and other symptomatic treatments are required.

The advisory further added that isolation should be followed for five to seven days from the onset of any symptom to prevent the spread of infection to other children or adults.

The best solution for prevention is the maintenance of proper hygiene and sanitisation of the surrounding necessities as well as preventing the infected child from sharing toys, clothes, food, with other non-infected children. Listing out the preventive measures, the advisory said one should avoid immediate contact with the infected person.

Tell your child not to hug or touch children having fever or rash symptoms. You should encourage your children to stop thumb or finger sucking habits. Encourage the child to use a handkerchief in case of running nose or coughing, it suggested.

The advisory also stated that one should not scratch or rub the blister. It also said that children should be kept hydrated.

Always use warm water to clean skin or for bathing the child. Take a nutrition-rich, balanced diet to boost immunity. It is essential to get enough rest and sleep to promote healing, stated the advisory.

Samples from throat or stool may be sent to a laboratory to test for isolating the virus involved in causing the illness, which may take two to four weeks to obtain the laboratory results.

The testing should be done for the investigation of an outbreak so that preventive measures can be initiated, the advisory explained.

Also Read: We Cannot Pretend COVID-19 Is Not Here, Says WHO Chief

The first case of tomato flu was reported in the Kollam district of Kerala on May 6 this year and as of July 26, more than 82 children aged below five years have been reported to have contracted the infection by the local government hospitals. The other affected areas of Kerala are Anchal, Aryankavu, and Neduvathur. This endemic viral illness triggered an alert in the neighbouring states of Tamil Nadu and Karnataka.

Additionally, 26 children (aged one to nine years) have been reported as having the disease in Odisha by the Regional Medical Research Centre in Bhubaneswar. Apart from Kerala, Tamil Nadu, Haryana and Odisha, no other region in India has reported the disease.

9 Covid Deaths, 50 Per Cent Jump In Daily Cases In Delhi