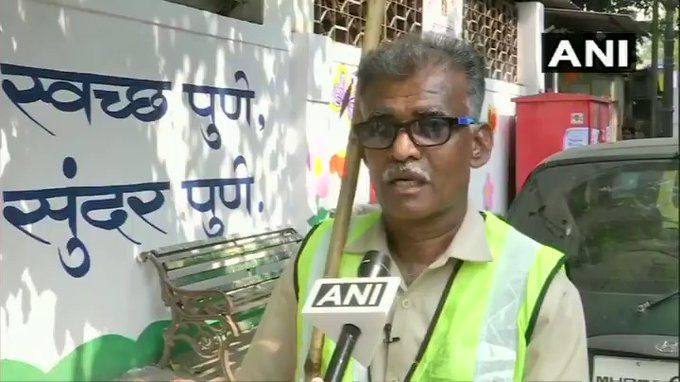 New Delhi: Remember the famous Bollywood song – ‘Kajra Mohabbatwala’? Now, 57-Year-Old Pune Municipal Corporation sanitation worker Mahadev Jadhav has given this song a new twist, only this time to discourage citizens from dumping garbage in public spaces. Mahadev Jadhav says that the idea to parody old Bollywood songs into swachh songs came to him when he saw some “educated people” throwing plastic bags containing trash on roads in Parvati area in Pune recently while going for a morning walk. He said, “I am a big fan of singing and writing poems, when I saw people carelessly throwing garbage on the roads, I decided to stop them via my songs, so now when I am out working and I see anyone dumping garbage carelessly, I start singing.”

So now every day when Mahadev Jadhav goes for his morning duty for segregating garbage from dump yards he sings these swachh songs. Moreover besides working as a sanitation worker, Madhav is currently also working on composing different songs on cleaning.

Kachra, sookha aur geela, sabne milla ke daala, kachre ne leli sabki jaan…. a line from one of Mahadev Jadhav’s swachh song which he is seen singing in his recent video which has got him a big thumbs up from social media. He adds,

No one asked me to sing, I started singing on my own when I saw these careless people throwing waste on the roads. I thought, I will reach out to more people. Through my songs, I create awareness about where to put dry and wet waste, so the people can be educated about waste segregation. Moreover, I tell about the ill-effects of using plastic and why each one of us should practice 3R’s – Reduce, reuse and recycle.

I have been working for the past 25 years as a sanitation worker, but the changes have started to appear now. Almost 60 per cent of the people understand and follow rules now and I wish to take it to 100 per cent.

#WATCH Pune: Mahadev Jadhav, a sanitation worker who has been working with the Pune Municipal Corporation for 25 years creates awareness about cleanliness and waste disposal, through songs. (17.11) #Maharashtra pic.twitter.com/udCRMy9Cmu

And here’s how he is winning hearts on Twitter..

Listen to this champ from Pune Muncipal Corporation who not only collects your waste everyday but also promotes cleanliness drive with his own songs and beautiful voice across city. Mahadev Jadhav is a sanitation worker working with @PMCPune. #Pune @swachhbharat #Maharashtra pic.twitter.com/HPFE0DzruK

We Indians need to learn cleanliness and stop blaming others for it.

Creative way to create #Awareness among people. Not only Punekars but every Indian should get inspired from this. Awareness for wet and dry garbage separation should be implemented all over country #SwatchBharatAbhiyaan @mybmc @PMOIndia @CMOMaharashtra

Not just citizens gave him a thumbs up, Union Minister for Housing & Urban Affairs, Hardeep Singh Puri also praised him for his efforts. He said,

I salute the dedication & enterprise with which Pune Sanitation Worker Shri Mahadev Jadhav is spreading a message against single-use plastics & is promoting Swachhata. This passion among our workers & citizens has transformed @SwachhBharatGov into a Jan Andolan.

I salute the dedication & enterprise with which Pune Sanitation Worker Shri Mahadev Jadhav is spreading a message against single use plastics & is promoting Swachhata.

This passion among our workers & citizens has transformed @SwachhBharatGov into a Jan Andolan. https://t.co/SnW3eAzjpe