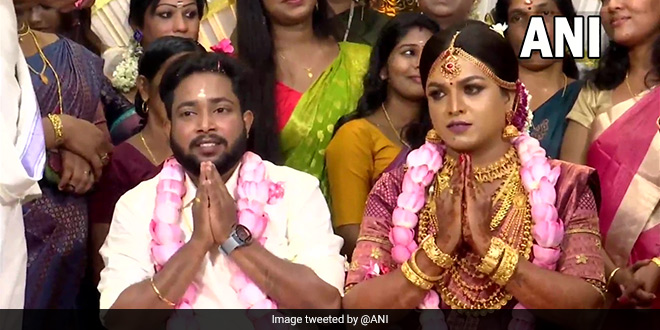 New Delhi: February is celebrated as the month of love. The kind of love that is not limited to romance and attraction, but also includes empathy, caring and inclusion of one and all. To celebrate their love that goes beyond what meets the eye, a Transgender couple from Thiruvananthapuram, Kerala tied the knot on Monday (February 14) which is also marked as Valentine’s Day. Syama S Prabha and Manu Karthika affirmed their love for each other and got married as per traditional rituals, as reported by news agency ANI.

While the venue was decked up in the shades of red, white and gold, the groom and bride were dressed in traditional attires. The ceremony was held in the presence of relatives and friends who were jubilant and blessed the couple on their wedding day.

The groom Manu is a Transman from Thrissur and works for an IT firm in Techno Park whereas the bride Syama, who identifies herself as a Transwoman is a native of Thiruvananthapuram and is employed at the Transgender cell under the Kerala Social Justice Department. The couple plans to knock on the doors of the High Court to get their marriage registered as one between Transgender individuals under the Transgender Persons (Protection of Rights) Act, 2019.

We are just finishing the paperwork to approach Kerala High court. After this, we will go to the High Court with all legal documents, said Manu, while addressing the media at the wedding ceremony.

The reason the couple has decided to move to Kerala High Court is that they want to register their marriage under Transgender identity, instead of the gender binary (male-female) under the Special Marriage Act. After sex reassignment surgery, some Transgender people chose to identify themselves as either male or female or third gender and that’s what is mentioned on their identity cards as well. In the case of Syama and Manu, their ID cards say Transgender or third gender and the law, currently, doesn’t allow marriage between Trans persons. Hence, they have decided to approach the high court, Manu told ANI.

Transgender couples who obtain their id cards as male and female get their marriages registered under Special Marriage Act. But we got ourselves identified as transgender in our ids, so we're not able to register our marriage under the Act, which is why we'll approach Court: Manu pic.twitter.com/Q8I3rj2tam

On entering the wedlock, the couple expressed contentment and thanked everyone for their support.

Related Topics:
Kerala Leaving No One Behind
Up Next