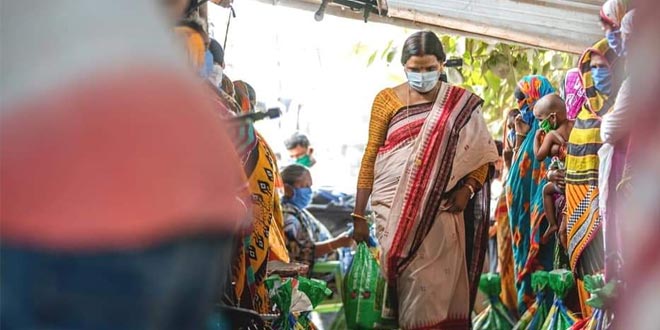 After having dealt with stigma and discrimination, today, Transgender Sadhana fights for the rights of fellow Transgenders

New Delhi: Born in a conservative Brahmin family to late Indramani Mishra and Ramamani Mishra in Odisha’s Keonjhar, Satya Sundar Mishra is the youngest of four siblings. At an early age, Satya realised that though he was assigned male gender at birth, he enjoyed doing activities generally associated with females like dressing up, wearing his mother’s saree and jewellery, putting kohl in his eyes and playing with dolls. While Satya’s father and elder brothers used to scold him and sometimes even beat him up for wearing dresses and draping a saree, he always had his mother’s and grandmother’s back. 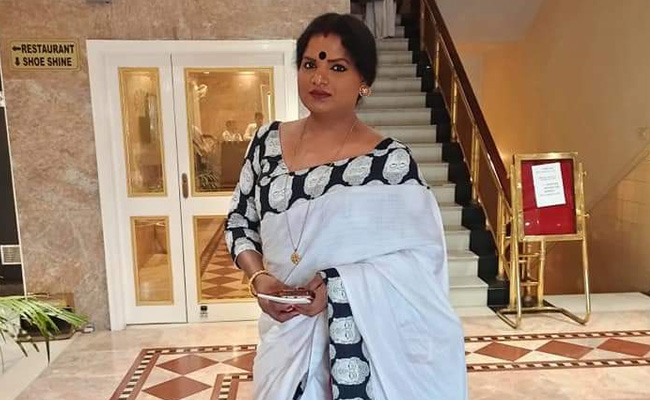 Elders of the village would pass nasty remarks and call me with different names like Maichia which means a boy having feminine behavior. As a kid, I had no understanding of words like Chakha or Hijra. As I grew, I started feeling uncomfortable in wearing trousers to school or using a men’s washroom. The names given to me started affecting me. I wanted to dance but I was refrained from wearing anklets, dancing or even learning to dance. Things started to take a toll on my mental health. I come from a small tribal village in Odisha and back then there were no school counselors to discuss your emotions and provide guidance, recalls Satya.

The young Satya would often cry when derogatory remarks were made and confide in his mother’s arms. Once when he asked, ‘why do people call me Hijra?’, his mother simply said, ‘you are a special child’. Satya held on to the word ‘special’ and decided to prove herself.

As an adolescent, Satya tried focusing on his education but questions like, ‘Why am I unable to keep my head high and behave as any normal boy?’, ‘Is there anyone like me out there on this earth?’ would be a constant thought.

My mannerisms were feminine and no matter how much I tried to act like a man, my body language would echo that there is a woman hiding inside. However, I pretended to be a man just to get educated and out of my cocoon. I moved to the capital Bhubaneswar for my Master’s degree in Social Work. It was a big deal to leave your house for education and live in a city. Post that I got an internship opportunity in Gujarat with Lakshya Trust and that’s where I came out as a Transgender person and changed my name to Sadhana, says Satya.

The next challenge was to stick to the new identity of a Trans person even back home in Odisha. In 2007, (now) Sadhana met Meera Parida and together they started working for Transgender people and their rights in Odisha and established an organisation called SAKHA.

As a kid, I have seen people from the Trans community begging on the streets, railway stations and bus stands. But this needs to change and can change through education and job opportunities. I have done double masters, worked as coordinator and anchor for Kalinga TV and currently pursuing my PhD. My friend Meera works as a political leader in the state. In Odisha, many Transgenders are working with Municipal Corporation, they handle parking lots, are involved in cleaning and riding cabs, says Sadhana who is currently working as a Social Development Officer with Kalinga Institute of Social Sciences.

Over the years, Sadhana has worked with people living with HIV and organisations like HIV/AIDS Alliance and United Nations Development Programme. In 2016, Sadhana was invited to be a part of the International Visitor Leadership Programme (IVLP) in the US. At that time, her passport identified her as male while she used to dress up like a female. This is after the Supreme Court declared Transgender people as the third gender. After her visit to the US, at the age of 30, she underwent transition surgery in Delhi and got her gender changed in official documents. 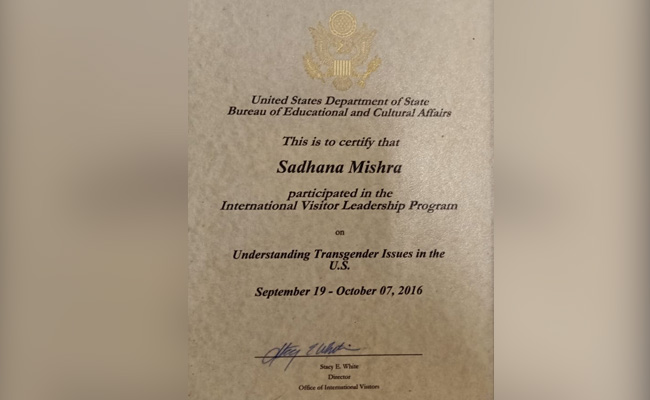 In 2016, Sadhana was invited to be a part of the International Visitor Leadership Programme (IVLP) in the US

My passport, job card, PAN card and even health insurance card say Transgender. In November 2017, I became the first in the state to obtain a passport under the Transgender category. I am proud of being a Transgender and would like to be born the same in next lives as well, says Sadhana.

When Sadhana changed her name, her family disowned her. While her elder sister was married, her brothers cut all ties after their father’s untimely demise. They also ensured that their mother didn’t stay in touch with Sadhana.

For 15 years, my family didn’t speak to me. However, today, back home people come and say, yes, my child is a Trans; I have brought that change in my community. My family feels proud of me and they have finally accepted me for who I am, says Sadhana.

World Witnessing Fourth COVID Surge, We Have To Be On Guard, Can’t Afford To Slacken: Centre