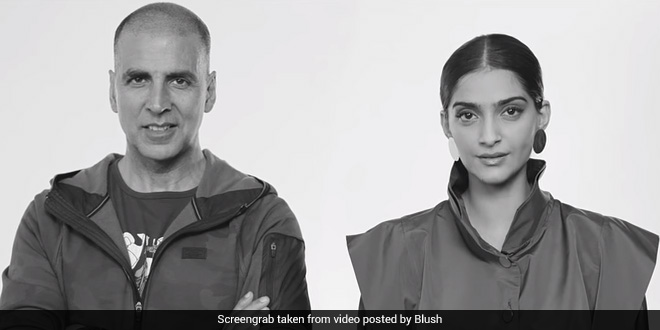 New Delhi: ‘PadMan’ actors Akshay Kumar and Sonam Kapoor have collaborated for a video- #AbSamjhautaNahin – The Shopping List. The video stresses on providing low cost sanitary napkins to underprivileged women. In the video, while actor Sonam Kapoor reads out a shopping list consisting of alternatives to sanitary napkins used widely by women in most parts of the country, actor Akshay Kumar reads out a shopping list which has sanitary pads XL with wings. Akshay Kumar highlights the difference between the shopping list of privileged and underprivileged women and the dependency of majority of women on alternatives like coconut husk, sand, dry leaves, dirty rags, wood shavings, and dirty cotton.

We live in a country where 88 per cent of menstruating women do not use sanitary napkins. Call it ignorance or issue of affordability, the reality is that majority of women in India still rely on unhygienic alternatives. Unhealthy menstrual practices can not only lead to diseases, but may also lead to death. Bollywood with its reach and popularity is trying to address and also make a difference by highlighting such issues through films like upcoming ‘PadMan’.The movie is based on the real life story of Arunachalam Muruganantham who has won National Innovation Foundation’s Grassroots Technological Innovations Award at IIT Madras in 2006 and received the Padma Shri in 2016. After actor Akshay Kumar who articulated the issue of open defecation in his film Toilet-Ek Prem Katha, his latest movie which is releasing on February 9, is all set to bring the conversation about menstrual hygiene in to the mainstream.

Akshay Kumar said in a statement,

The sense of shame around menstruation is compounded by lack of hygiene products. This can make life difficult for women and girls, who often miss work or school when they are having their periods. Through the video, we wish to bring out things in the open, so the chance for their being taboos and stigmas kind of starts to dissipate.

Promoting the cause, both the actors urge individuals to donate money for the underprivileged women of the country saying, a donation of Rs. 400 can provide a year-long supply of sanitary pads to women in various parts of the country. The initiative video concludes with the actors asking multiple stakeholders to join hands so that together we can change the shopping list of every woman and women don’t have to compromise with their health anymore.

Due to the secrecy surrounding menstruation, many disadvantaged women and girls end up using unhygienic material which result in serious health infections. Through the video, we wish to educate citizens of the country and break the culture of silence around menstruation.

Akshay Kumar concluded that sanitary napkins are a basic necessity and it should be made free so that each and every woman of the country can have access to it.

Related Topics:
Akshay Kumar Menstrual Hygiene In India
Up Next

A Toilet Must Before Renting A House, Goa Government To Mandate This Soon