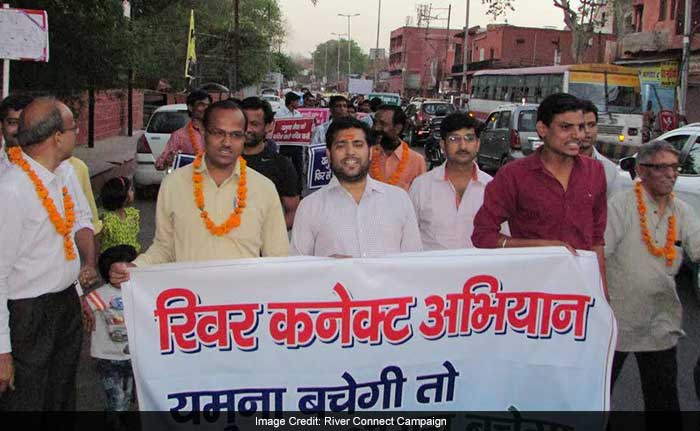 A popular image that has captured the imagination of every tourist in India is that of the Taj Mahal shining bright on a moonlit night, against the banks of the river Yamuna. However, it seems that the image will soon be confined to memories of the past, as the once clean and flowing Yamuna in Agra has since become a dry and polluted mess.

In a bid to end further pollution in two of India’s holiest rivers, Ganga and Yamuna, both were recently given rights similar to human entities. As the pollution and lack of water in Yamuna reaches unmanageable proportions, activists from River Connect Campaign organised a rally on March 9 at Agra to protest against the gradual “killing” of the river. The march was held to increase awareness among people about the lack of water in the river, as well as demand an end to the increasing pollution in Yamuna.

Yamuna has borne the brunt of unprecedented levels of sewage and waste dumping, as well as people using the river indiscriminately. Despite the Supreme Court of India monitoring the cleaning of the river for 22 years, as well as the spending of a massive Rs 4,439 crores, the state of the river has only gone from bad to worse. A poisonous combination of industrial and domestic waste pouring unmonitored into the river has resulted in its water becoming polluted and unusable. Around 1600 million gallons of untreated sewage is dumped into the Yamuna every day, thus pushing the river towards a gradual death.

The river has become completely unusable for us. For years, we have heard of crores being spent on cleaning the Yamuna but we are yet to see any results. This slow killing of the river must be stopped right away so that there’s something left in the river, said Naresh Paras, social activist.

River Connect Campaign, a campaign formed by environmental and social activists has been vocal about the state of the river in Agra. The city which boasts of historical monuments across the banks of the river has only seen a dried up and polluted version of the Yamuna for the last few years.

There is barely any water in the parts of Yamuna which flow around here. The Haryana government doesn’t release water regularly, which results in gradual drying of the river. Nearly 97 per cent of the water is impounded at the Hathni Kund barrage in Haryana. If released regularly, the water flow in these parts of Yamuna will increase and be beneficial for people, said Brij Khandelwal, environmentalist and one of the founding members of River Connect Campaign.

Drying up of the river has stolen the purpose of the historical monuments which were built on the banks of Yamuna, in Agra as the scenic beauty no longer exists. Dilution of pollutants has also become an issue, as most pollutants do not get diluted due to lack of water in these parts of the river. This results in the pollutants drying up and causing extensive damage to the environment. 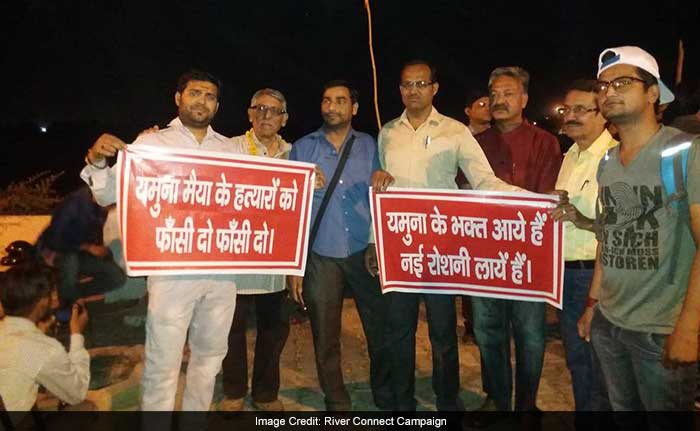 The pollutants in Yamuna dry up along with the river and they in turn cause extensive environmental damage to the surroundings. We want a pollution free Yamuna around us and water released from Haryana will ensure that the pollutants are washed away,” said Khandelwal. 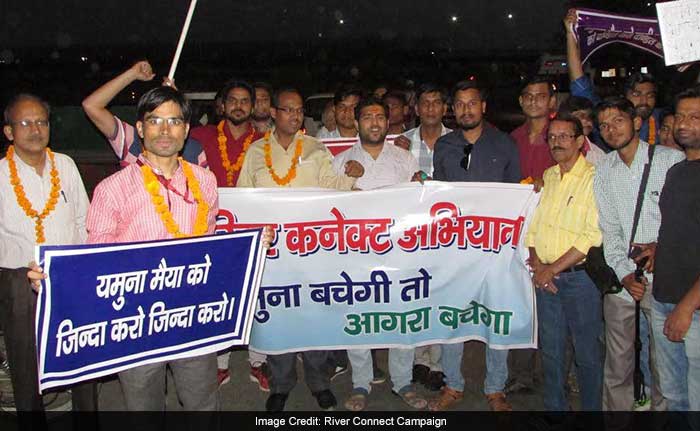 We demand to know why has the money, which was sanctioned ten years back not been utilised yet. The amount allocated for the project has kept increasing, but we are yet to see any work commence. Are the authorities at all interested in initiating the project? questioned Paras.

The Yamuna Action Plan has also failed to check the regular dumping of waste in the river, as well as address the issue of water sharing between states. The River Connect Campaign has also held extensive meetings with officials from the Ministry of Water Resources to get updates on the Yamuna Action Plan and how residents of Agra might benefit from it. They are hopeful of a number of positive changes, as per the Yamuna Revitalization Plan 2017 and expect it to improve the overall condition of the river, irrespective of the states.

Not just Agra, we are aware of the condition of Yamuna in Delhi and how the river is nothing more than a drain there. We hope that as per the Yamuna Revitalization Plan 2017, 16 Sewage Treatment Plants are constructed and can treat the large volume of sewage generated every day before they are poured into the Yamuna, said Khandelwal.

The River Connect Campaign plans to continue its fight for a cleaner Yamuna with more water, in Agra. The core members of the campaign meet every day to discuss future steps on how to approach the government and related bodies and holding up the grievances of Agra’s residents to them for the river which has given the city global recognition.

For us, Yamuna is not just a river. It is a symbol of Agra’s history and culture, and its preservation will always be our primary agenda. The march organised on Sunday attempted to bring some attention our plights. We plan to meet Water Resources Minister Uma Bharti very soon and speak to her about our problems. Our daily meetings will continue to focus on the state of the river in Agra and demand for a faster resolution to end our problems, said Khandelwal.

Related Topics:
Yamuna Clean Up
Up Next