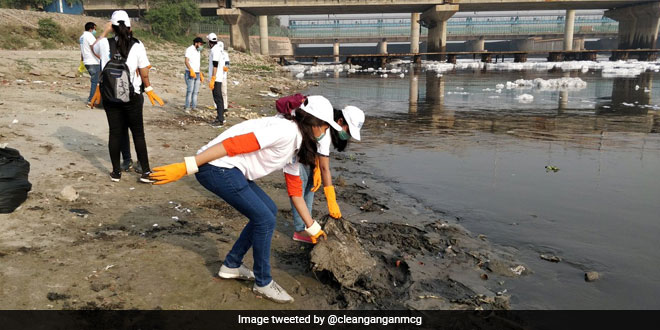 New Delhi: To celebrate World Health Day and to mark the beginning of ‘Navratri’, National Mission For Clean Ganga (NMCG) organised the cleaning of Yamuna Ghat at Kalindi Kunj in the capital on Sunday (April 7). Volunteers, especially college-going students, took part in hundreds in the cleanliness drive. Alongside ‘Namami Gange’ volunteers, students from Delhi University, Amity University, IP University among others as well as volunteers from Gautam Gambhir Foundation took part in the drive, in large numbers. Excited at the turn out of students and youths in the drive to clean a Yamuna Ghat, NMCG Director General Rajiv Ranjan Mishra highlighted the importance of youth joining the movement to rejuvenate the holy river.

Perhaps this is one of the best ways (of celebrating the beginning of Durga Pooja) because keeping rivers clean is also worshipping them. Today is also World Health Day and sanitation and health go hand in hand, so that is also the reason for carrying out this drive, Mr Mishra said.

He added, “The most satisfying moment for us is the huge participation of students here. I really feel so happy that students from different colleges of Delhi University like, Hansraj College, Amity and many more are here to take part in cleaning the ghat.”

Hundreds of volunteers from various organizations have gathered with team NMCG at Kalindi Kunj Ghat, Delhi to support our initiative for cleaner ghats in Delhi pic.twitter.com/Qi5luxLOGf

The students too were happy to take part in the cleanliness drive as they said it was high time to take initiatives to save the river on which millions of lives depend directly or indirectly.

Mehek, a student from Delhi University said, “After coming here, I feel liberated and feel satisfied that at least I am doing the bit I can.” A Hansraj College student, Shalu added,

It is high time that we (the youth) take part in cleaning the rivers across the country and especially River Ganga. If we delay it any further, leave alone the future generation, our generation too will face the wrath of water scarcity.

NMCG has adopted the Kalindi Kunj Ghat of Yamuna in New Delhi and they clean the ghat on a regular basis. But the large turnout of the students this time around was heartening for the NMCG team, who aim at wider public participation, and especially that of the youth, in the process of keeping the pious river clean.

Related Topics:
River Clean Up World Health Day Yamuna Clean Up
Up Next

In A First, Manual Scavengers Release A Manifesto Ahead Of The Lok Sabha Elections