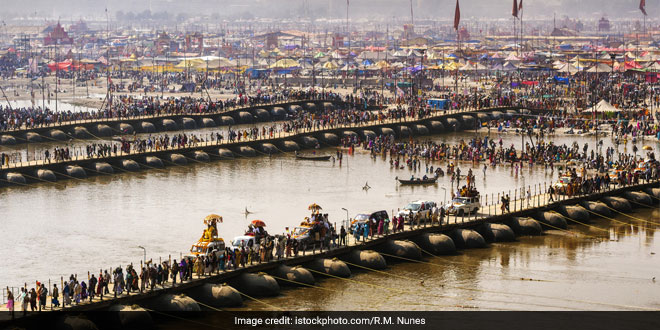 New Delhi: Magh mela, is 43-day long annual festival with fairs held in the month of Magha (January/February), the festival is marked by a ritual dip in the waters, and is also a celebration of community commerce with fairs, education, religious discourses by saints, and community meals for the monks and the poor. This year, the Magh Mela, being held in Prayagraj (earlier Allahabad) set to begin on January 10, 2020 will this time be a plastic-free event, the Magh Mela administration has announced that the usage of plastic as well as thermocol items in the Mela township have been banned.

We will be deploying three special teams to keep an eye on vendors flouting the rule. We are also educating all stakeholders about the hazards of plastic and thermocol products during the Magh Mela, Rajnish Mishra, the Mela officer told NDTV.

He further explained that during the Kumbh Mela, despite the authorities’ attempts to restrict the use of plastic products, due to lack of awareness, plastic items were widely used throughout the premises. Most prominently, thermocol and plastic plates and glasses were used by various ‘akharas’ for community meals.

This time, Mela officials will be informing all saints and seers about the ban on plastic and thermocol. We will also be imposing fines on the organisations, seers and vendors who are spotted using plastic or thermocol products. Furthermore, their credentials would be marked ‘red’, so that the authorities do not entertain them in the future such events, explained Mr. Mishra.

On the other hand, the Akhil Bharatiya Akhara Parishad president Narendra Giri asserts that the seers would also join the Mela officials in spreading awareness on this plastic issue.

We will urge devotees to shun the use of plastic and thermocol and ask them to use ‘kulhad’ and plates made from leaves, he told IANS.

Local potters of Prayagraj have also been requested to stock up on ‘kulhads’, ahead of the event, which sees millions of devotees in attendance every year, Mr. Mishra said.

In other facilities, Mr Mishra said that 18 tube wells are being installed for water supply and a total of 162 km of drinking water pipeline is being arranged at the premises. When it comes to the health services, he said that two 20-bed hospitals, three Ayurvedic and three homeopathic hospitals are being established in the fair in addition to 10 primary health centers. While the number of toilets in the fair has not being disclosed so far, Mr Mishra asserts it won’t be any less than the ones during the Ardh Kumbh in 2019.

When Prayagraj celebrated the Ardh Kumbh in the beginning of 2019, the event was termed as ‘Swachh Kumbh, Surakshit Kumbh’ (Clean Kumbh, Safe Kumbh) with the aim to ensure that cleanliness is maintained for the 130 million attendees at the mega event. The Uttar Pradesh government not only employed more than 20,000 sanitation workers, but also involved 1500 swachhgrahis (cleanliness volunteers) to educate and motivate visitors to keep the Kumbh premises clean. They further installed over 1.2 lakh toilets and set up temporary Sewerage Treatment Plants so that no faecal waste ends up directly in the holy river Ganga. While the event was a success in terms of cleanliness and hygiene, but plastic waste was an issue even then.

Air Pollution May Result In Increased Risk Of Heart Disease And Stroke, Says A New Study