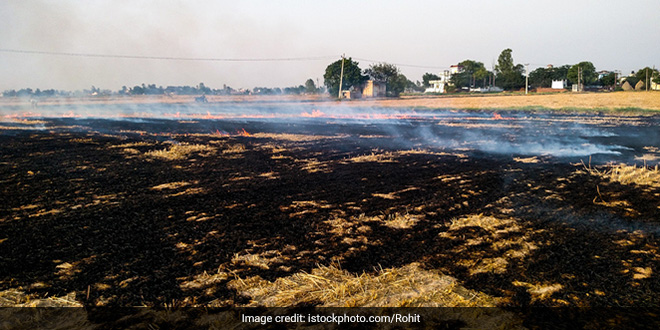 Gorakhpur: Even as the Centre and the state governments are trying to find a solution to the menace of stubble burning, an innovator from Uttar Pradesh’s Gorakhpur claims to have developed a cost effective solution. Ganga Ram Chauhan has invented a bicycle-based shredder machine which can crush and grind elements, including wood, leaves and crop remains into particles of less than 80 mm size. These particles can then be easily converted into compost. The machine costs only around Rs 5,000-6000, he says.

A scientist Mita Tarafdar asked me to develop a machine for zero waste management. Stubble burning was an issue that I had always wanted to deal with. So I developed a bicycle-based machine. Crushed particles of the crop residue can be turned into compost and farmers will not require any chemical fertiliser. They can sell their bio crops and vegetables at higher prices, said Ganga Ram Chauhan.

Senior principal scientist Mita Tarafdar, from the Council of Scientific and Industrial Research-National Metallurgical Laboratory, Jamshedpur (CSIR-NML), said that the machine was kept at the centre and can be improvised to benefit farmers and also check pollution due to the stubble burning.

The 50-year-old Ganga Ram Chauhan constantly keeps innovating and was awarded by the Yogi government in 2018 for his innovations.

He had developed ‘bogie-rickshaw’ for school children in the year 2000, and has been inventing many useful machines ever since.

My father was a plumber in Gorakhpur. I am not a science graduate, but technology and invention run in my blood. I had invented a bicycle which can be cycled very easily and its rear tyre does not wear out fast. My invention was approved by the CSIR- NML Jamshedpur and I was awarded for the same by Chief Minister Yogi Adityanth last year, he said.

I am not good at English and do not know the engineering jargon which makes it tough for me to explain and publicise my inventions.

But, Mr Chauhan’s this simple innovation could help governments fight the menace of stubble burning and may also help curb the rising pollution.

Where There Is Administrative Will There Is A Way: A Silent Cleanliness Revolution In A Telangana District