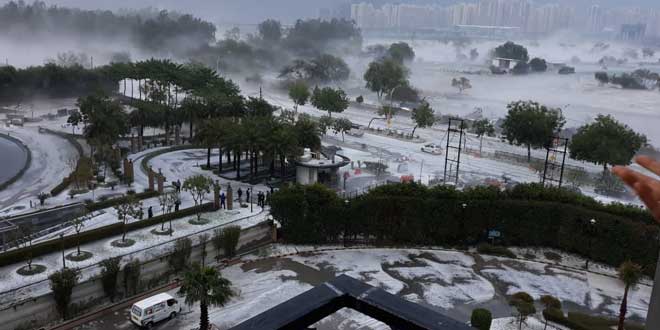 New Delhi: While the residents of Delhi and NCR (National Capital Region) are still excited about the unusual hailstorm accompanied by heavy rains that hit the capital and the surrounding areas on Thursday, the air quality of the region improved drastically to ‘moderate’ due to the heavy rain and high wind speed. The Air Quality Index (AQI) recorded by the Central Pollution Control Board (CPCB) on Friday morning was less than 200 in all the stations of Delhi-NCR in the morning at 10 am.

The overall AQI of the national capital region was recorded at 135 at 1 pm on Friday. On Thursday as the rains hit the capital and NCR region in the evening, the overall AQI of the national capital, according to CPCB data, was 171 at 4 pm which falls in the ‘moderate’ category, a significant drop from the AQI of 349 recorded on Wednesday, which falls in the ‘very poor’ category.

The improvement in the AQI on Thursday which continued on Friday was due to a drastic fall in the levels of Particulate Matters (PM)—2.5 and 10 which are less than 2.5 and 10 micrometres small and are extremely harmful to humans. The level of PM 2.5 recorded by CPCB on Thursday evening was at 76 and PM 10 was recorded at 119 in Delhi.

The NCR- Ghaziabad, Noida, Faridabad, and Gurugram received a maximum amount of hail and rainfall, as per a private weather agency Skymet. These cities also recorded low PM levels compared to high particulate levels the region has been facing in the last few months. The AQI recorded in Noida on Thursday night was 64 for the first time since last September.

However, as per the authorities, as the impact of the rain diminishes and as the wind speed slows down and moisture increases in the atmosphere, the air quality will deteriorate. Centre-run System of Air Quality and Weather Forecasting (SAFAR) predicted,

The wind speed is expected to slow down in the coming days which will deteriorate the air quality to poor after two days. The AQI will remain moderate on Saturday also.

Reiterating the predictions of SAFAR, Sunil Dahiya, a senior air pollution campaigner from Greenpeace India said that such spans of relief from a high level of pollution due to rainfall is only temporary and the air may soon go back to being toxic if substantial measures are not taken to cut down the sources of pollution. He said,

It is after nearly a decade that such a heavy hailstorm lashed in Delhi-NCR. Heavy rains and hailstorms reduce air pollution for the smaller duration but the real solution to pollution lies only in cutting down emissions from pollution sources, by reducing consumption of polluting fuels such as diesel and coal. So a source based targeting of pollution sources is the only real way to get of this health emergency due to air pollution.