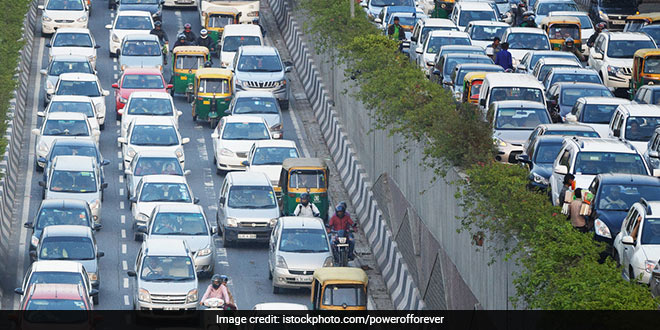 New Delhi: Delhiites, get ready to add another upgrade to your vehicle soon, as the Supreme Court on August 20 cleared the Union government’s proposal to use multi-coloured hologram stickers to identify vehicles on the basis of fuels used by them. Earlier this month, the Union government had floated a proposal to amend the Central Motor Vehicles Rules for a provision that makes colour-coded holograms compulsory for vehicles plying in Delhi-NCR. As per the proposal, blue coloured holograms will be used in vehicles running on petrol and CNG and orange coloured holograms will be used to identify vehicles operating on diesel.

Air pollution in Delhi has been identified as a major cause of environmental distress and both the Central and state governments have expressed concerns about it. Vehicular emission, along with dust and stubble burning have been cited as major reasons for Delhi’s poor air quality, which becomes worse post Diwali, at the onset of winter. As per Central Pollution Control Board’s 2016 report on air quality in India, vehicular emissions account for 36 per cent of nitrogen dioxide in the capital’s air. The odd-even scheme that reduces vehicular emission to check pollution in extremely poor air quality conditions, almost made a comeback last winter but was not implemented eventually. The Centre has suggested that the system of holograms on vehicles will be more effective than the odd-even scheme, as vehicles running on polluting vehicles will be easily identified and pulled off the road, in case of deteriorating air quality.

We saw last year that implementation of the odd-even scheme could not take place as there was controversy related to exemptions. The hologram system will be more effective, as vehicles running on diesel can be easily identified and pulled off the roads if air quality becomes very poor. The method is also much easier to implement and does not inconvenience commuters, said Rajeev Bhatia, Senior Advisor, Transport Research Wing, Ministry of Road Transport and Highways.

The colour-coded hologram scheme is already operational in Paris and has been effective in aiding traffic agencies to pull off polluting vehicles from streets. Registered vehicles will be able to get the colour-coded holograms from the Regional Transport Office (RTO). The Road Transport Ministry has been asked to implement the hologram programme on vehicles by September 30, 2018.

“This is a progressive move on behalf of the government. Logistically, it is an easy move to make and it will take off pressure from the authorities as it will become easy for them to identify polluting vehicles and take them off the roads. The only area of concern related to this plan is the installation of the proper coloured hologram on the proper vehicle. Any fabrication on that will defeat the whole purpose of the initiative,” said Anumita Roy Chowdhury, executive director, Centre for Science and Environment.

The air pollution crisis in Delhi-NCR last year saw a range of initiatives being taken at both Centre and state levels to tackle the problem. Delhi government will introduce a fleet of 1,000 buses to improve air quality in the capital. The Centre has also been vocal about solving the problem of stubble burning, with Prime Minister Narendra Modi recently requesting farmers to avail Centre’s schemes to stop stubble burning.

Ganga Drying Up In Summer Could Be Due To Indiscriminate Use Of Groundwater: Researchers