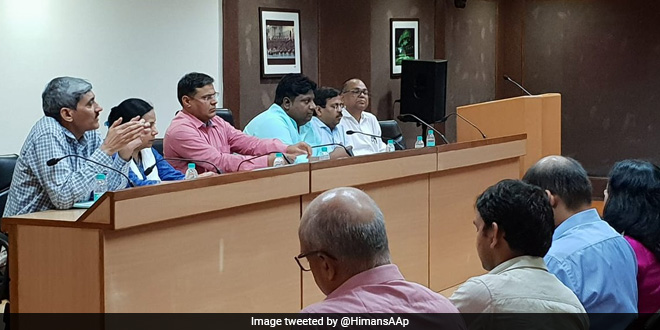 New Delhi: Dropping enough hints that Delhi government is serious about increasing the green cover in the city, Delhi’s Environment Minister Imran Hussain, on August 1, announced conducting a massive one day plantation drive, during which five lakh trees and shrubs will be planted in the city. Chief Minister of Delhi, Arvind Kejriwal will lead the plantation drive. Though the date and location for planting trees and shrubs has not been finalised yet, work for the same has begun.

Delhi CM @ArvindKejriwal sir will lead the plantation drive during next month with the active support of residents of Delhi and greening agencies. pic.twitter.com/TEJBUYnX8r

Also Read: Delhi To Have A Wall Of 31 Lakh Trees Around It To Shield It From Dust Storms

To discuss the action plan of the plantation drive, Environment Minister Imran Hussain, on August 1, chaired a meeting with various green agencies who will be a part of the plantation drive. Apart from this, to increase the green cover and combat the problem of air pollution, the government proposes to seek active participation from local residents, RWAs (Resident Welfare Associations), market associations, school and college students and government staff.

Forest Min @ImranHussaain has chaired a meeting with various greening agencies to review action plan for conducting a massive plantation drive during next month pic.twitter.com/Xek4pA5yT5

In the meeting, all the green agencies were asked to look out for a suitable location for the plantation drive and send suggestions to the forest department by August 3. The Delhi Parks and Gardens Society, a society to coordinate the management of parks and gardens in National Capital Territory Delhi, was asked to ensure free distribution of saplings before the massive plantation drive.

This is neither the first time that Delhi government has come up with a plan like this nor is this the first plantation drive in Delhi, in a recent while. Delhi Development Authority (DDA) is running a plantation drive under which 10 lakh saplings are to be planted during the ongoing monsoon season. From parks, roadside lanes, to Yamuna flood plains, the authority has plans to cover different areas of the city and give it a green makeover.

Apart from this, to instill the habit of plantation among people, Delhi Metro Rail Corporation (DMRC) has decided to distribute 8,000 saplings in the next two months. Saplings of native tree species will be distributed for free at various metro stations.