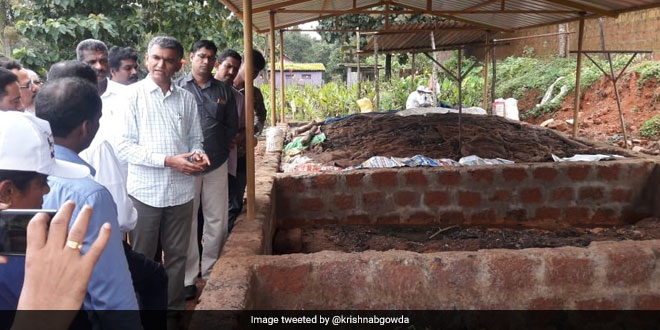 Over 2,600 tonnes of waste is generated from rural Karnataka daily, but the state pollution control board’s 2016 report states that less than 50 per cent of it is recycled or sent to recycling centres. Over 45 lakh toilets have been built in Karnataka in the last two years and the rural development department is concerned that the construction of toilets will result in generation of more solid waste and the state’s rural areas must be better prepared to deal with waste. Mr Gowda said that if waste is treated as a resource from which income can be generated, Karnataka’s rural areas will witness eco-friendly economic growth.

Rural Karnataka is nearly ODF, but waste management is still a concern as unscientific waste disposal is still rampant in many rural areas in the state. Lack of proper waste management infrastructure has resulted in people disposing waste casually. We are looking to transform waste management in rural Karnataka by making people aware of how waste can be utilised as a useful source of income, said D.V. Prasad, Additional Chief Secretary, Department of Rural Development, Karnataka.

The state plans to make work related to recycling of solid waste a part of the Mahatma Gandhi National Rural Employment Guarantee Act (MNREGA). By doing so, activities such as waste collection, waste transportation and segregation will become government guaranteed employments, for which participants will be duly paid. Transporting and selling compost to farmers has also been identified as a possible form of employment by the Rural Development Ministry.

“We will extend the concept of waste to wealth across all rural regions. Similar to urban municipal corporations, waste collection and transportation, recycling, selling of compost etc. will be paid jobs. We expect people to become more conscious about waste management, once they realise the value of waste and how it can be turned into wealth,” said Mr Prasad.

The Rural Development department said that a comprehensive programme FOR tackling waste management problems in rural areas will begin next month. The department is also bracing for an upturn in solid waste in many of the state’s rural areas, which are presently facing a grim situation due to floods. While neighbour Kerala is facing its worst floods in hundred years, Karnataka is also facing a dire situation due to floods, with over 6,000 people rehabilitated in relief camps. Once the flood situation is under control, the rural development department is confident of revamping its waste management efforts and drive Karnataka’s rural areas towards securing the ODF plus status.

This Mumbai School Goes Green, Gets Recycled Desk And Chairs Made From Used Cartons