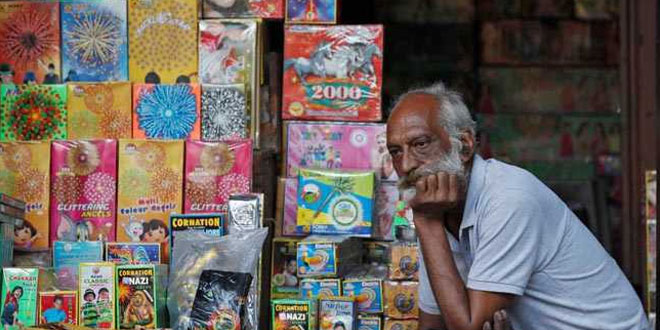 Chennai: The Tamil Nadu Fireworks and Amorces Manufacturers Association (TANFAMA) will file a review petition against  in the Supreme Court order putting restrictions on firecrackers that can be burst this Diwali. The Association plans to file the review petition post Diwali. Earlier the Supreme Court steered clear of a blanket ban on firecrackers and allowed bursting of only green firecrackers that are low on emissions and decibel levels during all religious festivals. On Diwali this year, firecrackers can only be burst between 8 pm and 10 pm, the court said. It also banned the use of Barium salts in the production of fireworks, manufacture and sale of stringed crackers and e-commerce sites from selling them.

We will be filing a review petition in the Supreme Court after Diwali against its order banning the usage of Barium salts in manufacture of firecrackers which would affect nearly 40 per cent of the industry’s production,” K. Mariappan, General Secretary, TANFAMA said. He also wondered on the time limit fixed by the apex court for bursting firecrackers as customs differ from state to state. “In Tamil Nadu, Diwali is celebrated in the morning for several decades. People get up early in the morning, have oil bath, wear new clothes, eat sweet and the `legiam’ (or herbal jam) and then start bursting firecrackers, Mr Mariappan said.

He further added the industry may not be taking back the stringed crackers already sold and the traders may suffer a loss. “As there is a ban on stringed crackers, there will be illegal market for the same. It will be difficult to curtail the same.” “The ban on stringed crackers will surely take out the Diwali thrill and would also impact the industry,” A. Asaithambi, President of TANFAMA told IANS. “While the Supreme Court has not banned firecrackers, the cost of alternative chemicals and its suitability to our climate are to be considered.”

The 6,000 crore fireworks industry is concentrated in Sivakasi in Tamil Nadu. Nearly 90 per cent of the country’s fireworks production is done there.

Last year, a group of three children had filed a petition to impose a countrywide ban on manufacture, sale and possession of firecrackers. The petitioners had cited the ill-effects on the environment and public health and had said that right to clean air is essential for growth and development. Taking the petition into consideration, the Supreme court had temporarily banned the sale of firecrackers ahead of Diwali. Later, the court refused to relax its order while dismissing a plea by traders who had sought permission to sell crackers for at least a day or two before Diwali. The apex court had said its ban order during Diwali that year was an experiment to examine its effect on the pollution levels in the region.

(With Inputs from IANS)