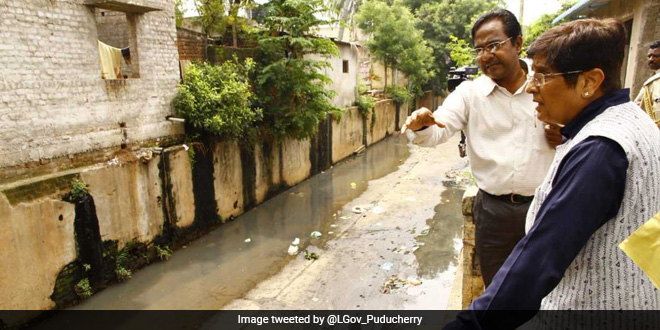 Puducherry: Puducherry Lieutenant Governor Kiran Bedi has been leading ‘Mission Water Rich Puducherry’, an initiative to clean-up water canals and other water bodies and planting trees since May 2016.As part of the initiative, for inspection every weekend during the morning hours, Ms Bedi has been visiting major water consuming industries that are also participating in the desilting of water channels by sponsoring the cleaning and plantation drives and paying directly to the contractor. Ms Bedi along with her team has completed 200 rounds of inspection.

The initiative includes the members of the ‘Water Rich Puducherry Team’ formed by the Lieutenant Governor to clean ponds, lakes, and canals and nearby public places and also encouraging the public to do the same as part of Swachh Bharat Abhiyan. The team has also been reviewing the progress of the clean-up activities.

See the amazing result achieved of facilitation of desilting Of Water Channels, cost of it being paid for by the donor directly to the contractor. It shall carry rain water to lakes, tanks and ponds. Making #PuducherryWaterRich. @ANI @smitaprakash pic.twitter.com/XZAcRyAW3U

During her 200th morning round, Ms. Bedi went to villages of Pilliyar Kuppam, Suthukeny and Korkadu Tank along with the ‘Water Rich Puducherry’ team and Raj Nivas team, which acts as a bridge between the willing donors companies like INOX, Caterpillar Whirlpool Corporation and Hindustan Uniliver, educational institutions like Sathyabama University and Venkateshwara Medical College and the contractors providing machines and labour for the clean-up drives removing any delays due to red-tapism or lack of communication. She along with the teams reviewed the progress made in cleaning up the 86km stretch covering 23 water channels feeding 84 tanks and 600 ponds with the help of private organisations and asserted that the efforts in these villages will help thousands of farmers and villagers around Puducherry city. She emphasized on the contribution of private institutions and said that the work was done directly by donor companies by paying the service providers directly and no financial transaction happened with the government. The work was supervised by engineers of the Public Works Department (PWD).

Hear what the donor is saying.. pic.twitter.com/NExh7azEdh

Ms. Bedi added, We are correcting the past. It is like a debt that has accumulated. We are clearing the debt of silt, the bushes. We are correcting the past, working for the present and now planning for the future. This is being done so that people of the area remain water rich. Water is life. If you have water, you have agriculture, you have sanitation; if you have sanitation, you have good health. If you are desilting the canal, there is no flood. It’s a win-win situation.

After over two and a half years, the ‘Water Rich Puducherry’ team has extended its scope of work to urban and semi-urban areas where they will be conducting cleaning up of drains beside water-ways. All the team members, including Ms. Bedi, have allocated drains to themselves for daily inspection of the progress made to clean-up drains by contractors and volunteers.

Our beach in Puducherry…
Where there is will there is a way..#SwatchtaCorp, Municipal Corp, PWD, Power Dept & Volunteers do it. #swachhatahiseva @alphonstourism @ANI @PTI_News pic.twitter.com/RmzIpbVy5M