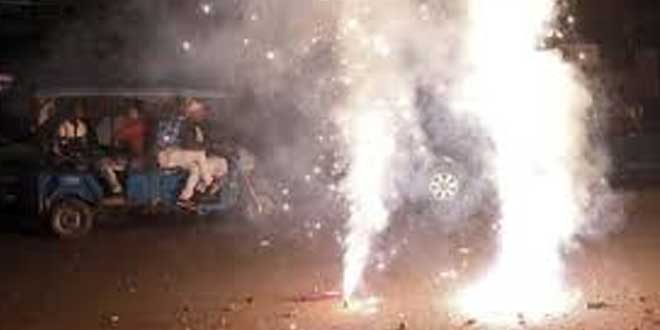 New Delhi: High level of heavy metals, including lead, was found in the urine samples of many patients due to direct or indirect exposure to firecrackers post-Diwali last year, according to the Central Pollution Control Board (CPCB). Heavy metals can pose serious health threats. Heavy metal toxicity can damage central nervous, cardiovascular and systems. According to a study conducted by the Centre for Occupational and Environmental Health in 2017, on the direction of the CPCB, there was excessive watering, redness and burning sensation in the eyes post–Diwali among the sample groups.

The study, made public on December 19 this year, by the CPCB in compliance with the Supreme Court order that directed it to publish on its website all studies since 2010 relating to ill-effects of pollution on the health of citizens had interviews of 470 subjects for the post-Dusshera period and 787 subjects in the post-Diwali period in Pitampura, Kotla, Siri Fort and Parivesh Bhawan areas.

Out of the 20 hospitals surveyed in the study, there was an increase in admissions post-diwali in 10 (50 per cent) of the hospitals. The families of the subjects were interviewed by means of a specifically designed questionnaire taking into account the respiratory, skin, ear, eye and other relevant symptoms. The study showed that there was evidence of increased levels of lead, barium and strontium in the urine samples of many of the subjects.

Lead affects the central nervous system in humans. When heated it can emit highly toxic fumes. Young children can suffer mental retardation and semi-permanent brain damage by exposure to lead. High level of barium in urine was above the permissible limits in all the four areas of Pitampura, Kotla, Sirifort and Parivesh Bhawan. It said,

On Diwali day, the value of strontium in PM2.5 was 1.17 µg/m3, which was far greater than the days before and after the festival in Pitampura area. In Parivesh Bhawan area too, it had touched the 0.83-µg/m3 mark, which is again high in comparison to the period before and after Diwali.

The study also looked into the attitude of the people towards the custom of bursting crackers during festivals. The study said,

The analysis revealed that about 13.5 per cent interviewed felt this custom should not be stopped, reasoning ‘those who want to use and play with crackers should be allowed to do so.’ Another 70 per cent were of the opinion that such bursting of firecrackers should be carried out in open spaces with community participation.

The study said about 18 per cent felt only display of lights should be enough to celebrate the festival. “The subjects who overwhelmingly felt that lights should only be used belonged to Parivesh Bhawan,” it said.