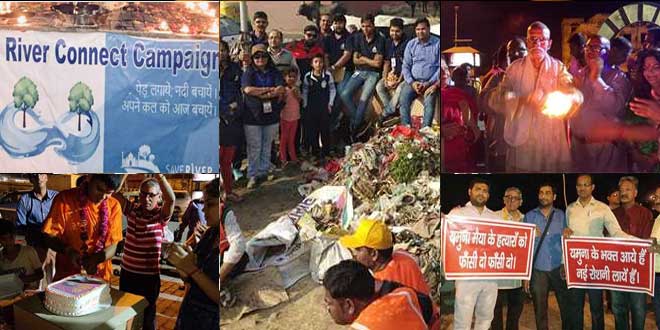 New Delhi: In a bid to clean and rejuvenate the Yamuna, River Connect Campaign, a people’s movement in Agra is on a mission to bring the citizens of the city of Taj Mahal together for the common cause of saving the river. The campaign has a core team of eight people, aims at connecting the people of Agra with the Yamuna by organising evening prayers for a cleaner Yamuna daily and conducting cleanliness drives on every Sunday. Talking about the aim of the campaign, Mr. Braj Khandelwal, a senior journalist who started the campaign in June 2015 said,

Most people of Agra were beginning to forget that there is a river in their city as it is no longer a river, it has become an open sewage canal. We felt that unless we get people of Agra emotionally connected with the river, they will not bother to save it.

As per Mr. Khandelwal, Agra used to have a clean and blue Yamuna earlier but owing to the growth in population, industrialisation and urbanisation, especially in the National Capital Region (NCR), the river has become one of the most polluted rivers in the world. The toxic froth visible at various stretches of Yamuna in the river. Agra is also one of India’s most popular tourist destinations making it more vulnerable to pollution and waste piling up. Mr. Khandelwal said,

Government’s approach to the problems of Yamuna is based on considering the river a mere water body. However, for the people of Agra it’s a heritage entity as the best of Indian history, culture, architecture, religion, and art happened on the banks of the River- from Agra to Delhi. It is a very important river.

If the flow and water quality of the river is poor, all the structures built at its bank are bound to collapse sooner than later.

Even though ‘aarti’ is a symbol of Hindu religion, this ‘aarti’, however, has a unique feature of being a platform for daily meetings where people discuss the issues of Yamuna, raise awareness, plan activities for cleaning Yamuna and build strategies for advocacy with the local authorities. 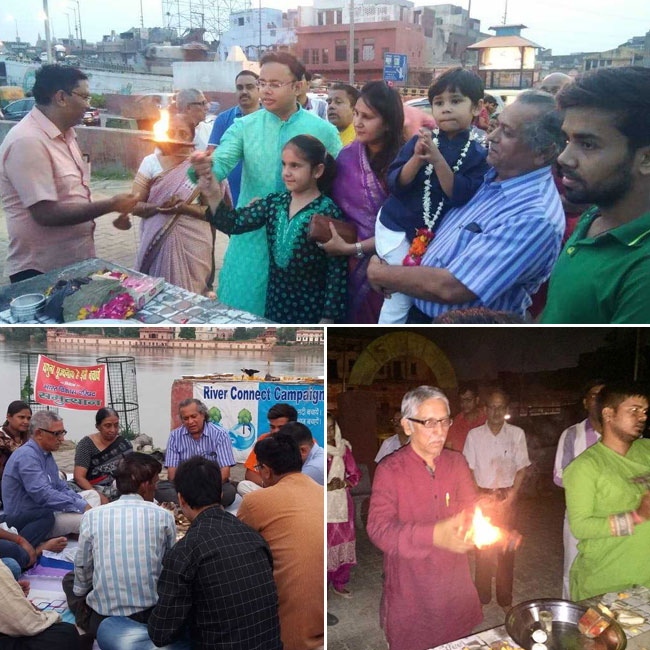 The daily evening prayer, organised by the River Connect Campaign. acts as a platform for daily meetings where people discuss the issues of Yamuna

This Aarti is also a secular one and anyone can perform and lead it by reciting the payer for the Yamuna. The River Connect Campaign has been organising the ‘aarti’ every evening at the Yamuna without fail since last three years. Mr. Khandelwal said,

Religion is a big part of many people’s lives. So we thought of using this element in bring people back to the Yamuna. Therefore, we started organising the ‘Aarti’ every evening like it is done at Har Ki Pauri in Haridwar but our ‘Aarti’ is for promoting cleanliness of Yamuna. Initially people used to come only for the prayer but eventually, people from all walks of life started coming who also participated in post-aarti discussions.

Cleanliness drives are being organized every Sunday morning at various places along the bank of Yamuna. “Usually about 30-40 people join us during the cleanliness drives but on some days the number even crosses 100”, said Mr. Khandelwal. On last Sunday, about 100 river activists and volunteers joined the cleanliness drive opposite the Etmauddaula tomb to lift garbage and idols immersed in the Yamuna. 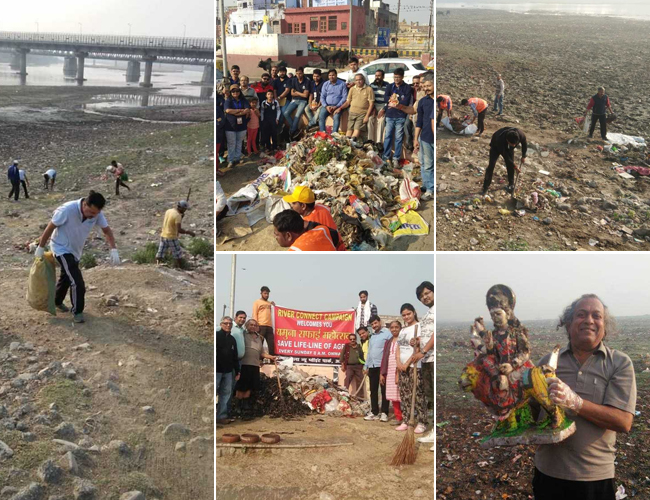 Regular cleaning of Yamuna is necessary to save heritage monuments along the river banks from Babar’s Ram Bagh, Etmauddaula, Agra Fort and the Taj Mahal.

He further said, “After the water level went down, the garbage dumps have resurfaced and are attracting insects, mosquitoes and even bodies of animals are piling up on the river bed spreading the stink.”

Mr. Khandelwal informed that there is no money involved in sustaining this campaign. People bring their own cleaning gears. There are some doctors associated with the campaign who bring masks and gloves for the participants, a few members bring sacks, and buckets to pick up the garbage and one of the other people arranges for transport to carry the garbage to the nearest dumpster. The garbage collected during these drives is dumped into the nearest garbage bin of Agra Municipal Corporation.

Eco-Friendly Celebrations Near The River

As an effort to bring people back to the Yamuna, the campaign encourages people who attend the daily prayers and meeting to celebrate their birthdays, anniversaries and other family occasions on the banks of the river in an eco-friendly way. Mr. Kishore said,

We ask people to bring their families to the Yamuna and have picnics and celebrations. We request them not to bring any plastic item for the celebration and use only bio-degradable items. Thankfully people are very cooperative. 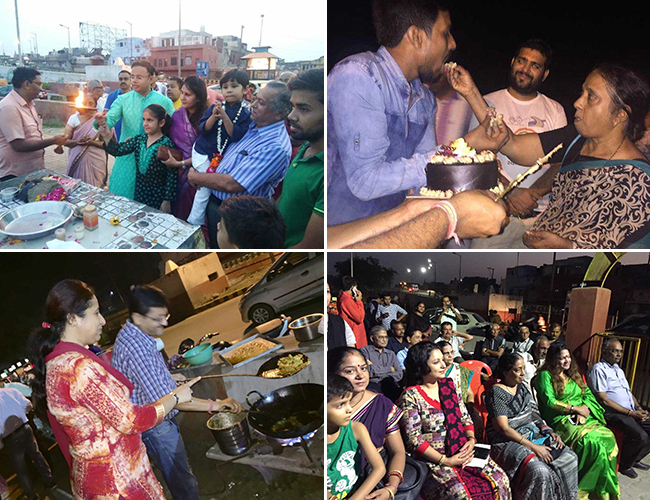 The campaign encourages people who attend the daily prayers and meetings to celebrate their birthdays, anniversaries and other family occasions on the banks of the river in an eco-friendly way

Along with birthdays, the campaign has orgnanised more than 150 events near the Yamuna including festival celebrations, plays, wall painting and kite-flying to revive the river culture and promote cleanliness.

The campaign is committed to fighting for a cleaner Yamuna with better water flow, in Agra. It has been organising protests marches from time to time to bring the attention of the authorities and of the people towards the plight of the Yamuna while demanding action against polluters for ‘killing’ the river Yamuna.

Mr. Khandelwal said that the local authorities in the city are cooperative as far as picking up the garbage collected during the cleanliness drive is concerned. However, he notes that they lack a proactive approach towards cleaning the Yamuna. The people associated with the campaign have demanded accountability from the authority for the condition of Yamuna.

The people’s movement, which has often conducted dialogues with the Agra Municipal Corporation, has asked it for better waste management in the city and proper operation of the Sewage Treatment Plants especially on the sewer directly emptying into the Yamuna.

Chacha Chaudhary Is Back, This Time To Promote Cleanliness And Waste Management