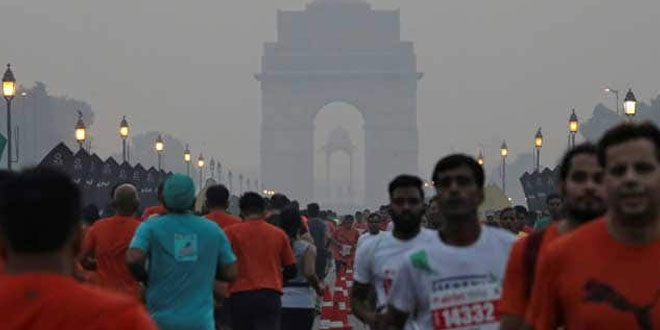 New Delhi: Delhi based citizen activists groups My Right To Breathe and Care for Air, have expressed concerns over vigorous activities like marathons which are not considered safe amidst the current air pollution crisis in Delhi and national capital regions. The groups reiterated the impact of running under a polluted sky especially on children and people suffering from pulmonary ailments. The groups have been constantly raising red flags over dangers of air pollution. They include doctors, educationists, environmental scientists, activists, media professionals, home-makers and entrepreneurs.

Over the past two months, Delhi-NCR has been reeling under the menace of air pollution. The air quality in Delhi and National Capital Region (NCR) has remained in the same category with PM (particulate matter) 2.5 hitting an average of 300 μg/m3 during morning hours, according to Centre-run System of Air Quality and Weather Forecasting (SAFAR).

According to the World Health Organisation (WHO) air quality guidelines, while the 24-hour safe standard for PM 2.5 is 25 μg/m3, annual mean is 10 μg/m3. PM 2.5, an ultrafine particulate matter measuring less than 20 times the width of a human hair travels more deeply into our lungs and affects adversely.

As the toxic air continues to make Delhi breathless, Indian Medical Association (IMA) and government run agencies like India Meteorological Department (IMD), Central Pollution Control Boards (CPCB) and SAFAR have recommended the citizens to refrain from outdoor physical activities in order to keep oneself safe from the impact of air pollution to some extent.

Many sporting events have been taking place across Delhi-NCR in which thousands of people including children and elderlies participate. According to the marathon calendar of IndiaRunning.com, a website that hosts a directory of running races and related activities, 56 major runs to take place during 1 Oct-31st December in Delhi-NCR.

Winter is the time when most of the sporting events take place in India like run for unity, navy run, Airtel marathons, national and international sports tournaments. But it is also the time when due to the increased density of air, the pollution level also increases.

Ravina Kohli, founder of My Right To Breathe said,

I know we cannot stop anyone from participating; it is an individual choice. But sanctioning an event that invites children and elderly people to run a race, in heavy air pollution, seems like the wrong thing to do, and inappropriate for corporate sponsors. Health of the people needs to be more important than financial gains of a company.

The citizen groups pointed out that a Gurugram School conducted the 5k race sponsored by Decthalon-India. The slogan of the race was “Be a part of the solution and not the pollution”, while ironically risking the health of the children by exposing them to air pollution. There were prize categories for children, adults, and elderly adults age 60 and older. Guneet Ohri, Principal of the Suncity School that organised the run said,

Whenever the pollution levels go high, the authorities tell people to sit inside their homes. But you can’t expect children to sit indoors. We conducted the run to raise this point and ask the government to take real measures to stop pollution and not ask people to stop going out. We also provided masks to each participant.

Jyoti Pande, member, My Right to Breathe said, “Masks are likely to be not fitted appropriately for, nor protect participants for, the duration of a 5K running race. Most episodes of illness would likely occur hours and even a few days after running in such an event. The company would not even know what the harmful outcomes would be.”

Dr. Geeta a member of Care For Air said, “Breathing properly while running is crucial as many runners go out of breath. Children are most at risks because of the alarmingly high levels of pollution that Delhi-NCR is facing, children are exposed to greater pollution levels relative to their body weight. Their developing organs are more sensitive to toxins and toxins are retained in children’s bodies longer than adults.”

According to a study published in The Lancet, India suffered 26 per cent of premature mortality and health loss attributable to air pollution globally. There were 6.7 lakh deaths due to outdoor particulate matter air pollution in 2017.

Air pollution is not only making people suffer in the country, it is also affecting the country’s name internationally. Earlier in November, the women boxers competing in the World Championship suffered due to air pollution in Delhi. They were seen wearing surgical masks, scarves and even T-shirts across their mouths during training to save themselves from pollution. The participants revealed that their folks back home were really worried for their health as the pollution levels rose several times beyond the safe limits.

Last year in December, we saw the National Green Tribunal (NGT) slamming the Delhi Government for holding India-Sri Lanka test match during high pollution and risking the lives of the player. The Sri Lankan fielders came out donning the face masks and some of the players even vomited. The match was later halted due to heavy smog.

On being asked about the CPCB’s directives regarding outdoor sporting events during high pollution, a senior official from the air lab of CPCB said,

There are no directions regarding marathons and sporting events in the GRAP but we will put this point forward during the next the meeting. However, the general advice is already there. People have been advised already to avoid any outdoor physical activities during high pollution days and keep minimum pollution exposure and also try adopting a more eco-friendly lifestyle so that they don’t contribute to already high pollution levels.