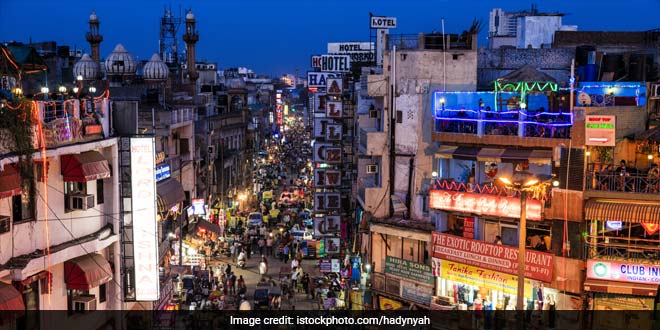 New Delhi: The effects of unrestrained urbanisation putting pressure on cities is evident not only from the burgeoning number of vehicles on roads, traffic jams and vanishing green spaces but also from the increasing number of residential skyscrapers to accommodate the swelling urban population. These residential buildings may also be putting the residents at a high risk of diseases related to blood pressure and metabolism due to lack of clean air, finds a new study published recently in the Journal of Public Health.

A group of researchers from Lithuanian University of Health Sciences studied the exposures to pollutants like Particulate Matter 10 (PM10) which are matters smaller than 10 microns, PM2.5, and NO2 levels in 1,354 participants living in private houses and multi-story houses in Kaunas city of Lithuania. They found that there is a link between the distance of residential colonies from green spaces, plus long-term exposure to ambient air pollution and the development of hypertension and metabolic syndrome that can increase the risk of heart diseases, stroke, and Type 2 diabetes. Apart from poor neighbourhood air quality, the reasons for these diseases also include hereditary elements, way of life, diet, and traffic air pollution.

Sharing some insights from the study, Agne Braziene, study’s lead author said in a statement,

Our research results enable us to say that we should regulate as much as possible the living space for people residing in multi-storeyed apartments to reduce ambient air pollution like promoting the development of green spaces in apartment campuses.

The study found that among the participants living in private and multi-story houses, and those staying within 200 metres of high traffic roads were more exposed to air pollution. According to the study, the mechanisms by which the exposure to air pollution could contribute to the development of hypertension include systemic inflammation and stress caused due to lack of fresh air. Prolonged exposure to PM 2.5, a pollutant matter that is smaller than human hair and can lodge into the lungs, can cause metabolic disorders. The researchers also found that a natural environment can have positive effects on people’s health.

Also Read: GST Council May Reduce Tax On Electric Vehicles And Their Components To Push Manufacturing And Sales

Dr. Suryakant, Head of the Department of Respiratory Medicine and Pulmonary of King George’s Medical University and Lucknow convenor of Doctors for Clean Air,

Air pollution is now fully acknowledged to be a significant public health problem and responsible for a growing range of health disorders. Rapid urbanisation has caused an increase in the concentration of a variety of air pollutants. People living in cities are exposed to toxic levels of air pollution both outside and inside of their house. Over the past few years, especially with the rise in the number of people settling in cities, there has been an increase in the number of patients visiting hospitals with complaints of heart diseases and respiratory problems.

In India, the safe air quality standards formulated by Central Pollution Control Board (CPCB) under the National Ambient Air Quality Standards (NAAQS) for PM 10 is 60 µg/m³ (microgram per cubic metre) as opposed to WHO standard of 20 µg/m³ and for PM 2.5 while India’s acceptable standard is 40 µg/m³, WHO sets the safe level at 10 µg/m³.

The number of cities with population more than one million that have pollutant levels more than the prescribed safe limits has increased from being 60 percent of the total cities in India in 2007 to 79 per cent in 2017. The pollutants which affect the blood pressure are mainly oxides of nitrogen, particulate matter. Indian women, especially, are affected badly with the rising urbanisations. They usually spent their time indoors exposed to pollution caused due to cooking, using incense sticks, dusting and from other domestic pollution sources which makes them more vulnerable to the risk. More the blood pressure more the heart will have to work to pump blood which leads to overtime thickening which can lead to clogging of arteries and hence heart stroke.

As per another expert on air pollution, Vivek Chattopadhyay from CSE, traffic fumes build up in air when both sides of the roads are covered by high-rises / multi storey building creating a canyon-like environment and this phenomenon is called Street Canyon Effect which is becoming more prominent with an increase in apartments in cities. He further explained,

Due to the street canyon effect, air movement is restricted by buildings on both sides of roads and so pollutant begin to build up. Eventually, the increasing concentration of pollutants in the ambient air impacts the occupants of the buildings, pedestrians, and cyclists. As researchers from Lithuanian University indicated, lack of clean air in residential spaces will affect the health of people by putting stress on breathing, cardiovascular system and even metabolism leading to hypertension, diabetes and heart attacks.

Mr. Chattopadhyay further said that the country is constantly struggling in building strategies to address air pollution, like formulating emergency action plans like GRAP (Graded Response Action Plan) which provided a series of actions to be taken when the air level increases to dangerous limits, launching National Clean Air programme targeting a reduction of 20-30 per cent in the particulate matter pollution in 102 cities across the country, exploring greener alternatives for transportation and promoting renewables. The Environment and Forest Minister Prakash Javadekar during question hour in Parliament recently shared that because of the government’s pollution-abatement efforts, particulate matter pollution has declined by nearly 15 per cent in Delhi and National Capital Region (NCR) in the last three years. He shared that India is meeting goals enlisted under the Paris pact and is within the emission limits set in the agreement. While he agreed that air pollution triggers respiratory ailments, he said that there are other factors as well that affect an individual’s health like food habits, occupational habits, socio-economic status, medical history, immunity, and heredity among others.

However, Mr. Chattopadhyay observed that the continuous increase in urbanisation has not been seen as problematic by most state governments and hence not many efforts are being made to mitigate the risks this direction. Along with finding ways for controlling vehicular and industrial pollution, there is an urgent need for including more green spaces and vertical gardening in city plans, to improve the ambient air quality. Mr. Chattopadhyay asserted that the governments must focus on strengthening basic infrastructure and work towards building adequate jobs for people living in rural areas and small towns along with promoting environment-friendly lifestyle and reducing carbon footprints.

Aaditya Thackeray Shares An Ugly Truth About Plastic Waste In Mumbai, Internet Says ‘Enough Is Enough, Save The Environment’

Number Of Days With Good Air Quality Is On The Rise In Delhi, Says Union Minister Prakash Javadekar