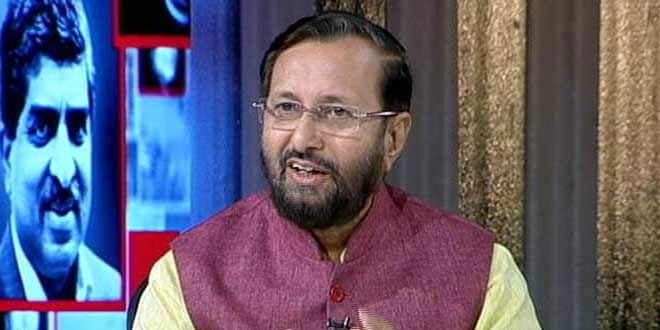 New Delhi: India is progressing well in achieving goals under the Paris pact to check climate change, Environment Minister Prakash Javadekar said in Rajya Sabha on Monday (July 1) while asserting that the country is not responsible for the problem of pollution at the global level but wants to be part of the solution. Under the Paris agreement, India and other countries have set targets called Intended Nationally Determined Contribution (INDC) to ensure the global temperature does not rise by more than two degree Celsius by end of the century, he said.

Asked if the government was planning to declare an environment emergency like other nations, the Minister said India’s pollution levels are lower compared to other countries.

So the entire world has set targets called INDCs. I am happy that India has taken steps to contribute in three areas. First, reduce the energy intensity of GDP by 30-35 per cent. We are walking the talk, Mr Javadekar said during the Question Hour in the Upper House.

He said the country is progressing well as 28,000 megawatt (MW) of solar power has been installed and operationalised so far. “We are making progress in generating 78,000 MW of non-renewable energy,” he said, adding that the country has set a target to install 40 per cent cumulative electric power from non-fossil fuels. The third goal is to have a carbon sink for which steps have been taken and as a result, the green cover has increased in two years, he added. The Minister, while replying to a query, said that the government alone cannot achieve environment protection and each individual should contribute in order to achieve the national goal.

After the session, I will send a questionnaire on how you can mobilise people in your constituencies, he added.

To a query on “failure” of state governments in enforcing environment laws, especially in Karnataka, Mr Javadekar said:

What has happened in Bengaluru (is that) the people have witnessed water bodies being on fire. I had gone to the spot thrice in my earlier stint as environment minister. Now also, I propose after Parliament session to hold one meeting.

He said enough budget has been allocated under various schemes which need to be implemented properly. When Congress member Jairam Ramesh sought to know the current level of carbon sink, the Minister said,

We have already taken stock of the present status and I will definitely give you in writing. We have planned year-wise action based on that.

On the issue of declaring environment emergency in the country, Mr Javadekar said that “when compared to other countries, the level of pollution in India is less” and cited data on per capita emissions from major countries. England is doing good with regard to carbon budgeting. “But it has to reduce emissions more as they are emitting more. Our per capita emissions and at the absolute level are lower,” he said. The Minister said India wants to set a global example in climate change action. “India is not responsible for the problem but wants to be part of the solution,” he said.