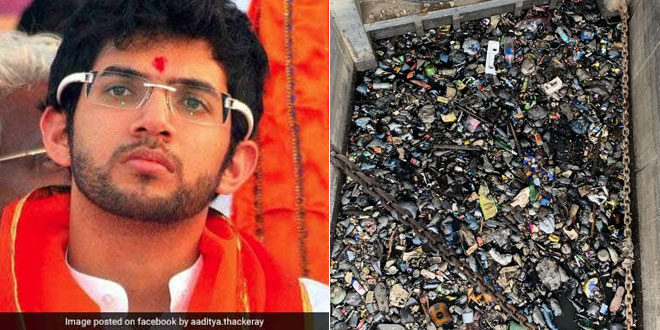 The President of Youth wing of Shiv Sena – Yuva Sena, Aaditya Thackeray shared Mumbai’s plastic waste horror story on his social media and how plastic menace is plaguing the city. He shared a picture and said, “This is what we do to our beloved city and the @mybmc cleans for us! This is one chamber at one pumping station in one nullah. Imagine the rest.”

Urging people to be careful about the way they handle waste and stop littering, he further added, “Let’s not do this to our city. Let’s not litter.”

According to the Central Pollution Control Board (CPCB), India generates around 25,940 tonnes of plastic waste every day, of which Delhi, Mumbai along with Chennai and Bengaluru, together are generating more than 50 per cent of waste. This is the situation in the city when the plastic ban in Maharashtra has already been implemented back in June 2018.

Seeing the grim reality of plastic waste in the city, netizens have also come together saying Aaditya’s post is an ‘eye-opener, we have to stop polluting the city and save it from plastic menace’.

Why do we blame @mybmc for everything?
We people of Mumbai are responsible for that. We should not throw garbages anywhere.

Some netizens also added that there should be buyback schemes on products that come in plastic packaging such as. shampoo, oil bottles to name a few.

Root is corps building soda,shampoo bottles, they can be innovative, and can spend in recycle infra across the city

While some said authorities should have proper waste management mechanism in the slums of the city as the maximum amount of waste on streets come from there. They also stressed on having waste management a part of the curriculum in the schools so that it is being taught to the children from starting.

The biggest trash comes from slums as they don’t have proper disposal mechanism. I hope the bmc will put measures to address the issue. And we should start to teach children’s in every school about waste disposal and segregation. We can have a booklet of 20 pages for all.

This needs to be addressed in the class rooms as part of curriculum for students right from class 1 – 5!

Fine should be levied. No litter sign boards should be installed. Else the mess continues and nobody seems to care

As a responsible citizen,we have take an ownership. No body will come outside to clean our house.
Awareness is very important and you are doing a great job????????????

Indeed, a tougher stance needs to be taken like in abroad where spreading garbage is treated as offence and punishable…until ppl realise by thr own and take city as thr home, they will continue to live with rotten hell environment..

Aaditya Thackeray was attending a meeting organised by Brihanmumbai Municipal Corporation (BMC) about their plans to rejuvenate the Mithi River, post which, he inaugurated the Gazdarbandh Pumping Station. That is when he spotted this disturbing drain filled with all sorts of plastic and decided to share it on social media.

Air Pollution: How Can Living In Apartment Buildings And Lack Of Clean Air Increase Chances Of Hypertension?