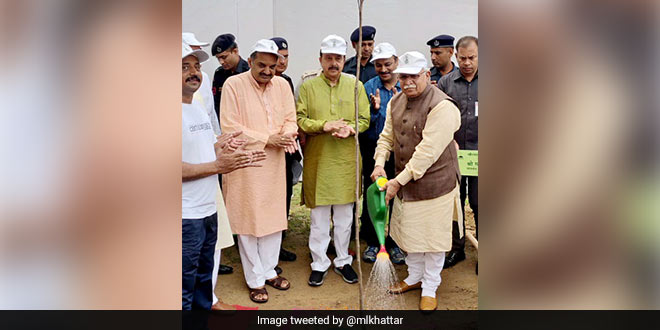 New Delhi: In a bid to expand the green cover in the state, Haryana Chief Minister Manohar Lal Khattar, on July 15 launched state wide ‘Paudhagiri Campaign’ (plantation drive). Kick starting the campaign, the Chief Minister planted a ‘maulsari’ sapling, also known as Indian Medlar, in Tau Devi Lal Sports Complex in Gurugram, Haryana. Along with the Chief Minister, 3,100 students from the various schools of the district participated. Under the campaign, from July to September, 22 lakh students of both government and private schools, studying in classes 6 to 12, will plant a sapling each.

Sharing the news on social media, Chief Minister said, “Today, in Gurugram, launched Paudhagiri Campaign under #Paudhgiri. In which thousands of students from numerous schools of Gurugram participated. Resolved to make the state green and sensitise people towards environmental protection.”

For plantation, each student will be provided a sapling from the forest department which they can plant either in their house or at a public place – field, nearby park, or school.

Also Read: Plant And Nurture A Tree And Get Rs. 50: Haryana Government’s New Scheme Targetted At Students For A Clean And Green State

They can name the plant according to their likes, maybe after the name of great personalities of the country, our freedom fighters or after the name of any of their family members or their ancestors. Every student planting a sapling will have to take care of it for the next 3 years.

Here the catch is students can earn Rs. 300 by planting and nurturing a tree. To get the incentive, all a student needs to do is plant a tree, and upload a selfie with the plant every six months. The government will provide an incentive of Rs. 50 for every six months.

The reason behind taking care of the plant for three years is, sapling is young and needs extra care. By the time it turns three, it is in the position of surviving on its own and by the age of 10, it will start giving flowers, fruits, and shade.

Also Read: A Story Of Peepal Baba, The Man Who Has Planted Over 20 Million Trees

Sharing the reason behind involving children in increasing the green cover in the state, Chief Minister said, “Children are saplings which will grow into trees in the future and become the state’s helmsmen. Associating children with plants and trees will be beneficial for the state. Keeping this in mind, we have started a special tree plantation drive with children at the helm.”

Further sharing the benefits of tree plantation drive and how it will help the state, Chief Minister said, “Trees intake harmful carbon dioxide gas and release oxygen for us. Also, they reduce the harmful effect of global warming and climate change and help in maintaining land fertility.”

Related Topics:
Haryana
Up Next