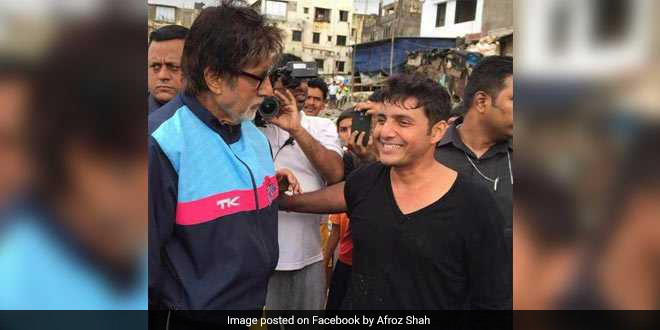 “I was shocked to find Versova beach in such a deplorable condition, but thanks to this genius of a man, with a golden heart the face of the beach has changed. It’s remarkable for an individual to think like this,” Amitabh Bachchan praised Afroz Shah on October 2, Rashtriya Swachhta Diwas during NDTV-Dettol Banega Swachh India. Impressed by the relentless efforts of Mr Shah, Swachh Ambassador Amitabh Bachchan gifted him an excavator (which Mr Shah fondly calls Junglee) and a tractor a few days back to ease the process of removing waste stuck inside the sands.

Last month the legendary actor got personally involved in the Versova cleanup drive and helped the beach warriors in removing the litter. The actor along with Afroz manually dug out the waste, “We physically worked and dug out all the plastic sunk under the sand. It takes a lot of effort to dig out the garbage that is thrown from the water. It takes 2-3 people to remove one plastic item. ” On the popular game show, Kaun Banega Crorepati, also hosted by Amitabh Bachchan, the lawyer-activist had even mentioned about his and the volunteer’s swollen hands after removing tonnes of plastic items stuck deep inside the sands.

Overwhelmed by the gesture of Mr Bachchan gifting them equipment that they needed, Mr Shah thanked him. “Amitabh Bachchan is an idol for millions. Those machines will fasten the cleanup process. After Mr Bachchan cleaned the beach for an hour he understood the problem very fast and gifted us the machines,” said the Swachh crusader during the Cleanathon.

Week 100 cleanup.@SrBachchan gifts 2 mean machine by @escortsgroup to clean the oceans.Thank you sir. You are angel to us and marine species pic.twitter.com/gs8BOYmJpz

Interestingly along with Swachh Bharat Abhiyan’s third anniversary, it was a landmark for Mr Shah as well, for he had initiated the mega Versova beach cleanup drive on October 2, 2015, “We completed two years, rewards are very fulfilling when you go on a date with oceans.”

To honour the hard work of Afroz Shah, Amitabh Bachchan had invited him on the popular TV quiz programme Kaun Banega Crorepati in the weekly segment of ‘Nai Chah Nai Rah’. On the show, Afroz Shah spoke about the urgent need to address the water pollution to save our environment and marine life. He won Rs 25 lakh which will be used in getting gloves for his volunteers and equipments required to conduct the cleanliness activity. Shilpa Shetty, another Swachh Bharat Abhiyan ambassador also appreciated the work of Mr Shah on the programme and played with him to help him win the cash reward. Shilpa too is involved in a cleanup drive at Juhu beach in Mumbai. Through her wellness organisation IOSIS, the drive is carried out every Tuesday, she said.

Also Read: Cleanathon 2017: The Boy From Sherwood College Does It Again, Impresses Amitabh Bachchan With His Swachhta Poem

Summing up his 102 weeks of cleanup he said that the in last two years they have managed to pluck out 7,800 tonnes of garbage from the beach. The cleanliness drive was even recognised by the United Nations. The UN conferred him with the title of ‘Champion of the Earth’, “The United Nations has termed this cleaning activity as the biggest beach cleanup in history,” added Mr Shah.

Afroz highlighted that it is not easy to remove plastic from the sands, “It’s just not the plastic that you pick up manually but it is actually a fight. Sand gets accumulated in plastic bags and packets and it consumes a lot of our time. With the junglee excavator, we hope to eradicate the plastic jungle from Versova beach.”

He added that the menace of plastic that is affecting our water bodies, “Plastic waste comes from our littering habits. We have seen crabs, prawns and snakes getting choked on plastic particles. Imagine if one is told to have breakfast with 1 gram of plastic everyday, the end result is cancer.”

The solution to the plastic crisis starts with an individual believes Mr Shah, “We must pick it up. It starts with making your house zero garbage.” He further appealed to people to start segregating their waste and indulge in composting.