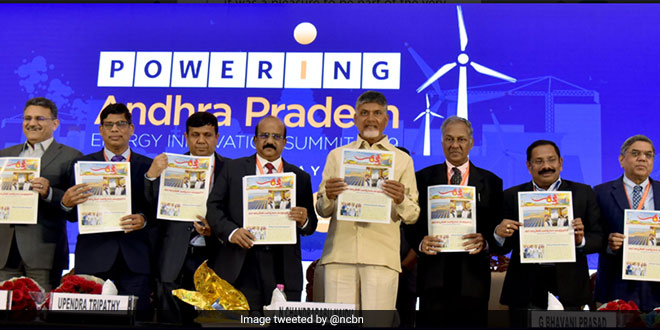 New Delhi: Andhra Pradesh (AP) Government has set a new and challenging vision for the energy sector as it announced its new electric mobility policy at the Andhra Pradesh Energy Innovation Summit 2019 on February 5. The main goal set by the government is to have at least 10 lakh electric vehicles (EVs) across all vehicle segments plying in the state by 2024. In order to achieve this target, the state government aims to convert the entire fleet of Andhra Pradesh State Road Transport Corporation (APSRTC) into electric, which stands at over 11,000 buses at the moment.

Furthermore, all government vehicles, including the ones under Government Corporations, boards, and government ambulances, will be converted to electric vehicles by 2024. The government also aims to have one lakh slow and fast EV charging stations installed throughout the state by 2024.

Announcing the policy, the Chandrababu Naidu-led government claims the new policy will attract a combined investment of over Rs 30,000 crore and create about 60,000 jobs. To encourage indigenous manufacturing of EVs, the state government has allocated a Research and Development grant of Rs. 500 crore.

Also Read: Travel To Airport In An Eco-Friendly Way As Hyderabad Plans To Launch A Fleet Of 40 Electric Buses

Another step announced by the AP Government is to turn its de facto capital Amaravati into an electric-only city as the government will stop new registration of cars that come with an internal combustion engine (ICE). Vehicles that come with ICE run on petrol and diesel. The state government has, however, not decided on a timeline for the transition of vehicles from ICE to electric, yet.

It was a pleasure to be part of the very stimulating Andhra Energy Innovation Summit 2019 in Vijayawada. An important forum for discussing the many ways in which AP will position itself in the global Energy sector, the summit also put forth ideas that can help us achieve SDGs. pic.twitter.com/FUOC5Zg2Y2

Industry needs a clear direction and MSME will invest only if there is a clear policy. Green number plates for electric vehicles, no permits for three-wheelers are a good move, we just need to implement the national and state EV policy in action and I’m sure Andhra will have 1 million EVs in by 2024.

Public transport and fleet operators need to shift to EVs before personal buyers get into it. Three-wheelers moving to electric will benefit both riders and users. It is economically viable for giving more savings and benefitting environment with zero-emissions.

Saurabh Kumar, MD EESL (Energy Efficiency Services Limited) also talked about the need for public awareness on the benefits of EVs. He said,

It’s all about driving demand. The US gives capital subsidies for EVs. Even in China, there are huge capital subsidies. EESL thinks India doesn’t need any capital charge. Cost of running an EV has an inherent economic benefit.

Mr. Kumar also talked about the need for more charging infrastructure and claimed that EESL will have over 100 public charges in the next one month.

The electric mobility policy of Andhra Pradesh also gives a clearer view on the financial incentives for private charging stations and hydrogen refueling infrastructure for the hydrogen based EVs.

As per the same policy, the state government will offer a 25 per cent capital subsidy of the value of the charging station equipment and machinery. The subsidy will be up to a maximum of Rs. 10 lakh for chargers that are 100V and above, for the first 100 stations and Rs. 30,000 for chargers that are less than 100V, for the first 300 charging stations.

Other incentives include 25 per cent subsidy up to Rs.10 lakh for first 50 battery swapping stations, and 100 per cent reimbursement of state GST on the purchase of fast chargers and advanced batteries for EV battery swapping. The government will also be offering 25 per cent subsidy of up to Rs.10 crore, on fixed capital investment for the first 10 hydrogen generation and fuelling plants.

Green Safari: Animals To Breathe Free, Thanks To Electric Vehicles Being Deployed In Various Tiger Reserves