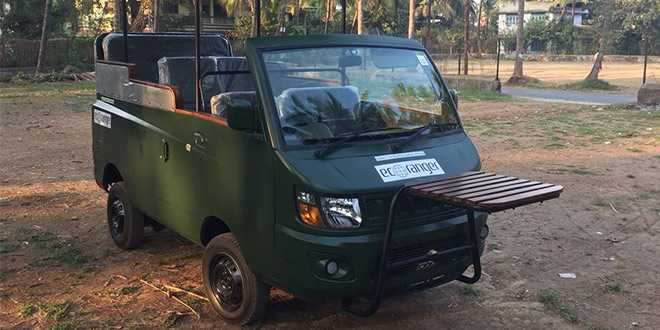 New Delhi: ‘A few years from now, replacing safaris with electric vehicles in jungles will seem to be such an obvious solution,’ tweeted Chairman, Mahindra Group, Anand Mahindra on the day Mahindra successfully completed a pilot project of running electric vehicle safaris in Tadoba Andhari National Park, Maharashtra. The pilot project was kick-started in Chandrapur district of Maharashtra last year in March, wherein two customised vehicles from Mahindra & Mahindra Electric called Supro Van, especially designed for jungle safari was given to the authorities.

The electric safari vehicle can accommodate six people and the charge is Rs. 2200. “Switching to electric safari is only a positive thing. The charge of safaris is kept the same as was for the Gypsies, the only difference is that this safari will be a lot more pollution and noise free,” added the official.

The Mahindra & Mahindra Company has confirmed that the national park will be now be using Supro ECO-Rangers for all its safaris, thereby helping in protecting the forest ecosystem.

Replacing jungle safaris with electric vehicles will undoubtedly prove to be a boon. Vehicles running on diesel engines definitely disturb the inhabitants and most of the national parks had so far been using diesel-powered vehicles, which are also more polluting. Switching to EVs will ensure greater efficiency and greener environment, even the cost of running the vehicles will be low. Moreover, chances of spotting a big cat will be more as there will be no diesel engine to announce the approach of a safari vehicle.

Like Tadoba, the Sariska Tiger Reserve in Alwar, Rajasthan will be next in line to replace its safari vehicle fleet with Mahindra Supro ECO-Rangers. Currently, the company is also conducting another pilot project in Ranthambore National Park as well.

The company has also said that several other national parks and tiger reserves have expressed interest in employing Mahindra’s EV for e-safaris, soon, jungle electric safaris will be a welcoming thing across the country.