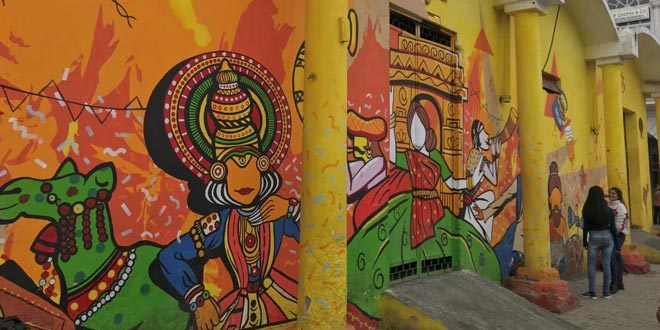 New Delhi: While biding goodbye to the year 2019, the Ministry of Housing and Urban Affairs (MoHUA) on December 31 announced the results of the first and second quarter of the Swachh Survekshan league 2020. Along with this, Swachh Survekshan 2020, the fifth edition of the annual urban cleanliness survey, scheduled to commence from January 4, was rolled out. According to the ministry, Swachh Survekshan 2020 will be rolled out across India which means all Indian cities will participate in the 28 days assessment programme, scheduled to culminate on January 31.

This year, the Ministry of Housing and Urban Affairs (MoHUA) has revised the marking scheme for overall assessment. Under Swachh Survekshan 2020, cities will be ranked out of the total of 6,000 marks as opposed to 5,000 marks in Swachh Survekshan 2019. The data will be collected from five different sources – citizen feedback, direct observation, service level progress, certification for garbage and open defecation free (ODF), ODF plus and ODF plus plus cities, and the average score of Swachh Survekshan (SS) league 2020. The new entrant in the marksheet is the SS league 2020. Average rank of the cities from the results of the three quarters assessed under SS league will also be considered. 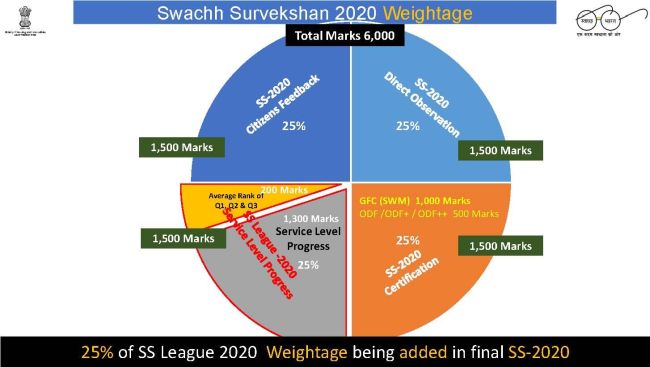 Swachh Survekshan 2020: Breakage of marks for assessment of cities

25 per cent weightage that is 1500 marks have been allotted to citizens’ feedback. Highlighting the importance of citizen participation in the survey Durga Shanker Mishra, Secretary, MoHUA, elaborated,

A major thrust of Swachh Survekshan has always been on citizen engagement, be it through citizen feedback or indicators involving citizen participation. This year, the citizen-centric focus has been enhanced substantially through verification of the progress made by cities on Swachhata through direct responses from citizens. Citizens can share their feedback through the 1969 Swachhata Helpline (1969), the Swachhata App, Swachh Survekshan 2020 portal, outbound calls and the Vote for Your City App.

Under service level progress, all the cities will be evaluated on varied parameters including:

Also, 1000 marks have been allotted to ‘star rating’ achieved by garbage-free cities as per the protocol released by MoHUA. The star rating protocol is based on 12 parameters and follows a SMART framework – Single metric, Measurable, Achievable, Rigorous verification mechanism and Targeted towards outcomes. SMART includes components like door-to-door waste collection, cleanliness of drains and water bodies, managing construction and demolition waste, waste segregation at source, scientific processing of waste, remediation of landfills, and other things.

Cities are rated as 1, 2, 3, 4, 5 and 7 star based on their compliance with the protocol conditions specified for each of the rating. While cities can self-declare themselves 1, 2, or 4 stared cities, MoHUA will give 3, 4, or 7 star rating only after a verification done by independent third party. During the Swachh Survekshan, depending on the number of stars, cities will be given marks.

The History Of Swachh Survekshan

Swachh Survekshan, what the government claims to be the world’s largest cleanliness survey was initiated in 2016 wherein only 73 cities were assessed on their swachh quotient. In its second edition in 2017, Swachh Survekshan widened the coverage of the survey to 434 cities, with a population of one lakh and above. In the year 2018, the annual assessment got bigger and better and surveyed 4,203 cities, which is almost 10 fold increase from the previous year’s survey. In its fourth year, the survey was conducted across 4,237 towns and cities and 62 Cantonment Boards, impacting around 40 crore people.

In 2016, Mysuru, the third most populous city in Karnataka was crowned ‘India’s Cleanest City’ whereas in 2017, 2018, and 2019 Indore was declared India’s Cleanest City. In the first and second quarter of Swachh Survekshan league 2020 as well, Indore topped the charts.

Green New Year: Bhubaneswar Steps In 2020 With Green Gifts, That Gives Back to The Environment