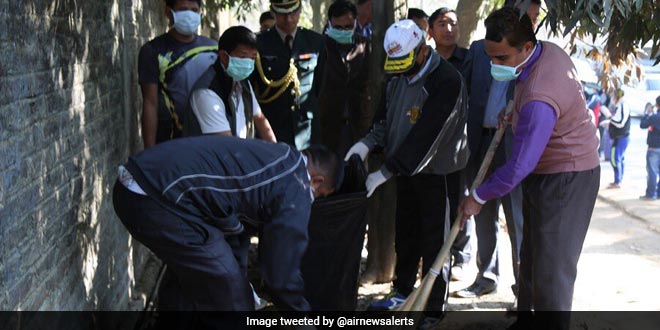 New Delhi: To achieve, clean, green and plastic free Arunachal Pradesh, the state government has initiated a cleanliness campaign ‘Hamara Elan Swachhta Aur Nari Uthan” which aims to not just encourage the citizens to keep their surroundings clean but also to empower women. Governor Brig. (Retd) B.D. Mishra actively participated in the first day of the cleanliness drive, which was started off in the state capital Itanagar. Leading from the front, the governor along with other participants from Raj Bhavan, Itanagar Municipal Council and other volunteers cleaned the areas Mithun Gate and Nyokum Lapang. For the swachhta drive, the entire Itanagar Capital Complex has been divided into 30 wards according to the population, and groups of four to five wards are being taken up for cleaning simultaneously. At the launch of the campaign, the governor appealed to the people to keep their surroundings clean and dispose of the garbage at the designated places after segregating biodegradable and non-biodegradable items in separate waste bins.

“Women development is also a part of the theme of the cleanliness drive, the Governor said while addressing the employees of the Raj Bhavan, along with eminent personalities, members of the district administration and the Itanagar Municipal Council, and volunteer residents of the wards.

“Every individual has an important role to play to bring change in the mindset of the people; and change must begin from each home,” the governor added.

Mr Mishra also urged the Information and Broadcasting ministry to be a part of this cleanliness drive so that the message of ‘Clean Itanagar’ reaches each and every individual in the state and they take pride and resolve to keep the beautiful Capital City Itanagar clean and tidy.

Itanagar’s Deputy Commissioner (DC) Prince Dhawan (IAS) also urged the masses to be part of Raj Bhavan’s initiative and sought cooperation for success of the ongoing door to door garbage collection in all 30 wards of the state’s capital, which has been initiated to make the campaign effective and result oriented.

The DC also requested citizens to hand over the garbage to the municipal garbage collectors only. He further informed the locals that a new website for Itanagar www.itanagar.nic.in has all the details of the garbage collection route plan, the pick points, the details of the drivers and labourers, along with other necessary information. “Any complaints, suggestion, feedback regarding Itanagar Municipal Corporation may also be registered through ‘My Itanagar App’, informed the deputy commissioner.

As part of this campaign, toilets will also be constructed to ensure that women, in particular, don’t have to defecate in the open, thereby lessening their falling prey to diseases. The initiative will particularly help pregnant women who often have to travel long distances to relieve themselves. In addition to this, the government is also forming women only teams which will go around Itanagar to spread awareness on menstrual waste and how to dispose sanitary napkins in a hygienic way.

The cleanliness drive, which started on January 8, would continue for a month to ensure that things improve on the ground.