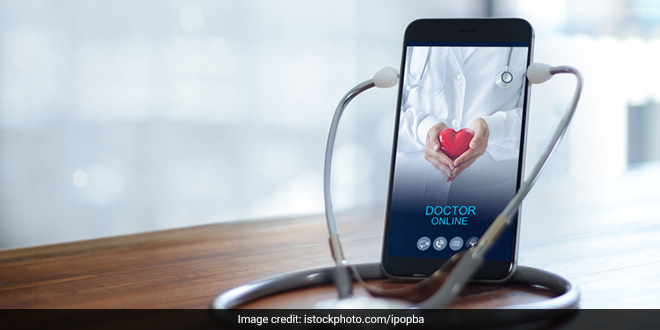 New Delhi: In view of a substantial number of COVID-19 patients recuperating in home isolation, Union Health Minister Mansukh Mandaviya on Tuesday (January 25) asked states to focus on expanding the reach of teleconsultation services to provide timely healthcare. He interacted with health ministers, senior bureaucrats and administrators of nine states and union territories Jammu and Kashmir, Himachal Pradesh, Punjab, Chandigarh, Uttarakhand, Haryana, Delhi, Ladakh and Uttar Pradesh, according to a statement from the health ministry. Mr Mandaviya urged them to adopt the hub and spoke model and open additional teleconsultation centres. This will enable beneficiaries to access advice from experts stationed at district hubs, it said.

He said the government’s eSanjeevani telemedicine system has provided services to more than 2.6 crore beneficiaries where people can seek medical advice from the confines of their homes.

This will prove to be a game-changer and will be of immense value and importance for the hard-to-reach and far-flung areas, and especially in the northern regions in the current winter season, he highlighted.

States and union territories need to ensure that these centres work 24X7 and ensure convenience for both the common public and health experts. To ensure minimum hassle and travelling, such expert advice can be provided at the block levels, secondary or primary health centre levels too, the official communique stated quoting Mandaviya. He advised the states and union territories to ensure that those in home isolation are efficiently monitored in line with the national guidelines. This will ensure that the vulnerable categories of active cases in home isolation get the required medical help in a timely manner, the statement said. The virtual meeting was held to review public health preparedness for containment and management of COVID-19 and the progress of the national COVID-19 vaccination campaign. State health ministers who joined the high-level review meeting included Anil Vij from Haryana and Uttarakhand’s Dhan Singh Rawat.

Reiterating that the Centre is dedicated to supporting states and union territories in containment and management of COVID-19, Mandaviya requested the attendees to review and expedite implementation of activities under the COVID Response Plans-II (ECRP-II) package for strengthening the health infrastructure. He urged the health ministers and state authorities to plug the existing gaps by efficiently utilizing the amount sanctioned for various infra projects, the statement said.

With strengthened health infrastructure, we can meet any health emergency and public health crisis with better preparedness, he said.

States were advised to ensure regular updation of availability, occupancy and use of infrastructure such as hospital beds, pressure swing adsorption plants and oxygen equipment on the COVID-19 portal.This update will help in obtaining a bigger picture and taking data-driven decisions at several levels for efficient public health response, it was noted. The Union health minister re-emphasised the need for ramping up testing. Those states and union territories showing a lower share of RT-PCR testing were requested to expedite tests, the statement said. They were also reminded to keep a close watch on the emerging clusters and hotspots, and monitor the trend of hospitalised cases, along with the deaths in the state.

He also requested states to promote vaccination among adolescents in the age group of 15-18 years and ensure full coverage in the districts that have shown a lower coverage of the first and second doses.